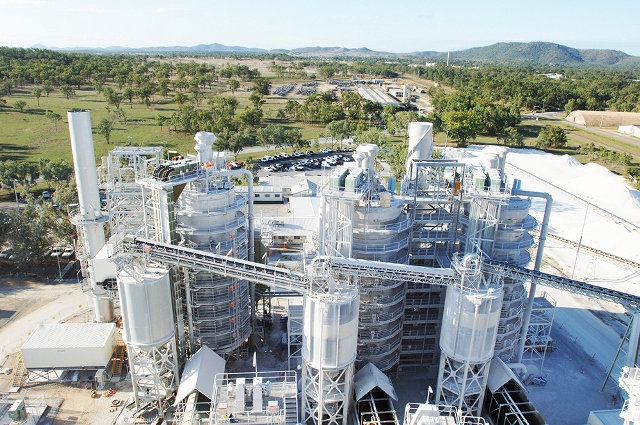 The long awaited outcome of Sibelco’s sale of Queensland Magnesia Pty Ltd (QMAG) finally came to a conclusion last month with the 14 January announcement from major refractories group Refratechnik, Germany, that it had entered into a share purchase agreement to acquire 100% of the Australian magnesia producer.

Refratechnik Group, headquartered in Munich and celebrating 70 years of operation, is the largest family-owned refractory company in the world employing more than 1,700 people at 27 locations worldwide.

According to Refratechnik’s statement, QMAG “will add vertical supply-chain integration in addition to existing partnerships and strengthen Refratechnik’s position as a global industrial mineral producer… With the addition of QMAG’s magnesite ore reserves to the Industrial Minerals division of Refratechnik, sustainable supply to all customers is secured for decades, and the foundation for further growth of the group is laid.”

The move by leading industrial minerals multinational group Sibelco to sell QMAG has been in the wings for the last few years and comes as little surprise.

The Belgian group purchased QMAG from Resource Capital Funds in 2012. Sibelco had been active in Australia and New Zealand since 2000, and appeared to be seeking to diversify its mineral interests (traditionally glass and ceramics minerals, QMAG was its first magnesia producing asset), though even at the time many questioned the significant magnesia buy as a “mineral fit”, and the amount paid for it.

From late 2017 there was somewhat of a revival in FM demand, and QMAG’s FM capacity was back in action, followed by DBM demand resurgence in 2018-19 as Chinese supply became constrained from environmental controls and other factors (see China’s refractory minerals crisis: dark days of the Dog continue).

However, even this turnaround in the market (ie. for Western supply prospects) did not deter Sibelco from deciding enough was enough, and by 2018 it was clear that QMAG was up for grabs.

What is perhaps more of surprise to some is the new owner – Refratechnik. But should it really be a surprise? And are they just in time? 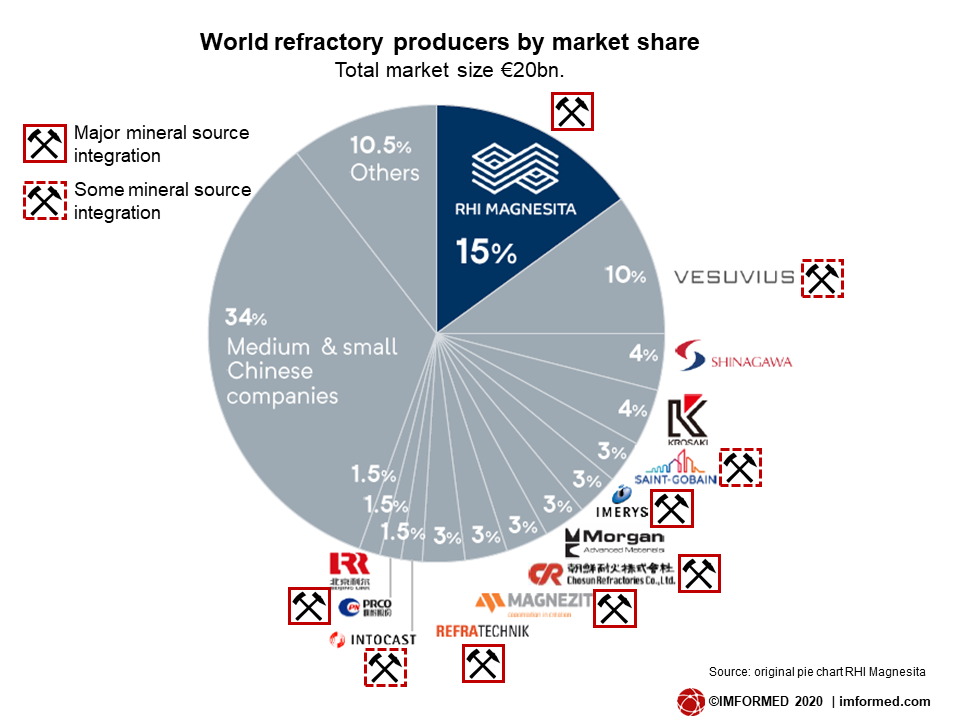 Refratechnik is clearly pursuing increased self-sufficiency in refractory raw material supply, a path taken by certain other refractory companies, particularly with regard to magnesia, and notably by giant refractory conglomerate RHI Magnesita (RHIM).

Before their mega-merger initiated in 2016 (see RHI & Magnesita: how they stack up), in their separate entities RHI and Magnesita had actually embarked on this strategy some years earlier, and had also operated well-established captive magnesia sources for many years.

As primary producers of basic refractories sourcing of magnesia was of chief concern, although it should be noted that Magnesita also owned dolomite, chromite, refractory clay, and graphite sources.

RHI had to divest its dolomite assets in 2017 (to Intocast) for the merger to go ahead. However, just last December the group announced a huge > €40m investment in the construction of “Dolomite Resource Center Europe” – the biggest investment RHIM has made in Austria in 30 years. Refractory dolomite for the European market will be mined and processed with a new rotary kiln at Hochfilzen (100,000 tpa by 2021) before being transported by rail to sister plants in France.

Finding the right source: what to look for in exploration and evaluation of magnesite deposits
Dr Ian Wilson, Consultant, UK

There was much talk of this trend of vertical integration with raw material supply taking off among other refractory companies.

The main driver being security of supply for in-house consumption in manufacturing refractories, but also frustration with China’s ongoing issues with supply and quality availability and consistency, not to mention price fluctuations (China still remaining the world’s dominant refractory raw material source).

However, other than RHI and Magnesita, there has been little movement elsewhere along these lines. Outside China (where such vertical integration is very common in the refractories sector) the only notable example comparable in scale is Magnezit, Russia, and Imerys, the latter focusing on various aluminosilicate sources worldwide.

Sure, Kerneos, as was, acquired a majority stake in its Greek bauxite supplier Elmin in 2012, and then proceeded to acquire S&B’s bauxite assets, but not long after was itself acquired by Imerys in 2016. (see Imerys appeal dismissed: Andalusite Resources merger prohibition stands and Imerys seals S&B acquisition: so what does it mean? )

First Bauxite: the new source from Guyana in a class of its own
John Karson, VP Sales and Marketing, First Bauxite LLC, USA

There are other examples, but not that many, and with the exception of Ashapura, India, most are smaller scale, focused on just one, maybe two minerals, and commonly magnesite, and most have been well established integrated producers since their founding.

Few have made relatively recent forays into strengthening their resource base, these include Magnesitas Navarras (acquiring 50% Magnesium do Brasil in 2013) and Grecian Magnesite (acquiring Akdeniz, Turkey also in 2013). 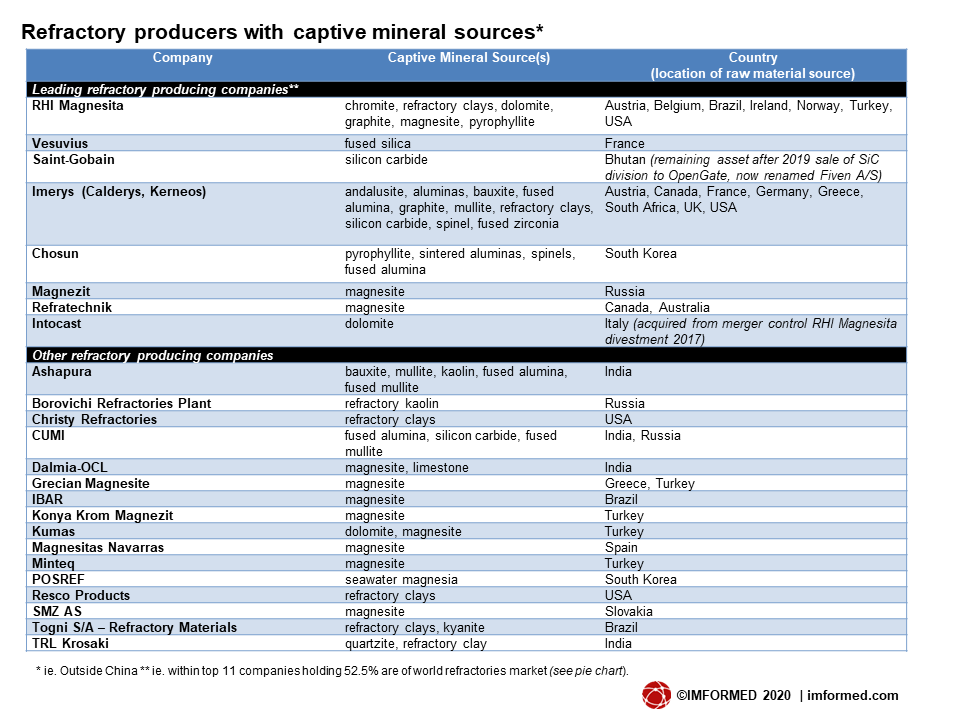 So why Refratechnik and why now?

It is significant to note that Refratechnik is no stranger to magnesite and magnesia processing.

In 1979 Refratechnik founded Baymag Inc., which secured a large magnesite deposit at Radium Hot Springs, British Columbia. Since 1982, Baymag has been producing high purity, caustic calcined magnesia at its Exshaw, Alberta with an annual capacity of more than 100,000 tpa and is a well established supplier of non-refractory magnesia grades (see Baymag timeline).

Although fused magnesia production was initiated in 1984, and a 14,000 tpa fused magnesia plant installed at Exshaw in 1989, this was mothballed soon after, and despite constant market chatter ever since about a possible reopening of the fusion plant, Baymag has not done so, mainly owing to negative cost and market factors. 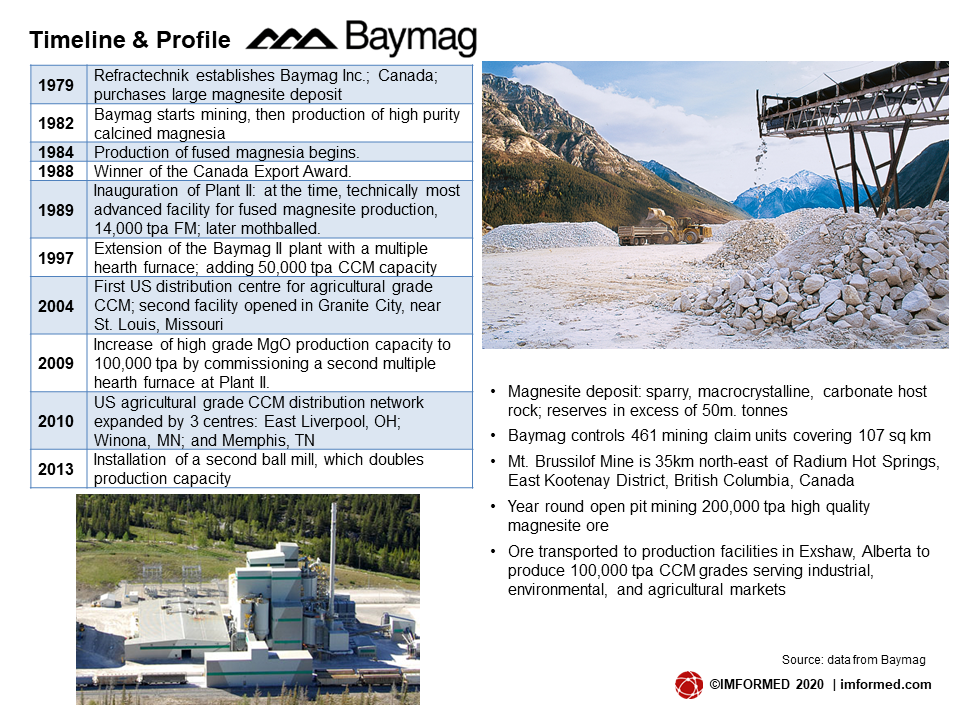 Hagen Schultes retires
After more than 42 dedicated years, Dr Hagen Schultes has retired as CEO & Chairman of Baymag Inc., effective 31 December 2019. Right from the initial development of the Mt Brussilof magnesite deposit, Dr Schultes’ leadership through the many years has contributed to Baymag’s continuous growth and success. His kind co-operation, enthusiasm, support and convivial company was always much appreciated by this author.

Refratechnik is a major player in the world magnesia refractories market, with an estimated 3% market share of the world total refractory market (see pie chart above) bringing it into the top 10 accounting for a combined 51% market share.

After the multinational heavyweights of RHIM and Vesuvius (taking a combined 25% share), Refratechnik vies for position with Magnezit as next in line as a main Western magnesia refractory producer – since the others in front are either more focused in the Far East, or on aluminosilicates and other refractory materials.

Since the founding of Refratechnik Holding GmbH in 1995, the group has also been steadily growing through acquisitions and new plants, especially since 2000 (see Refratechnik timeline). 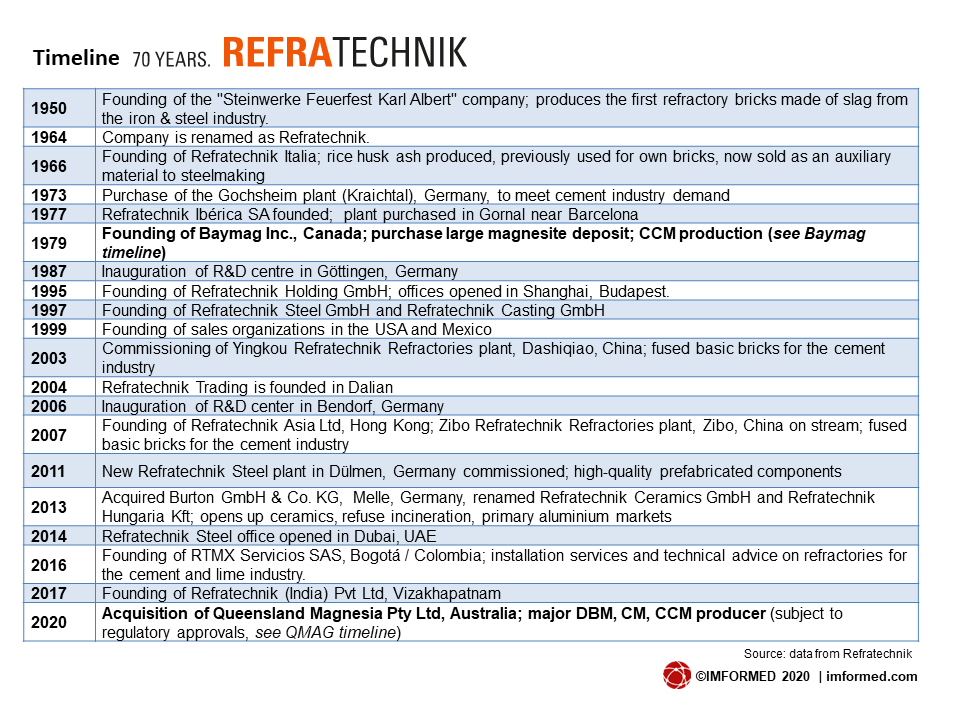 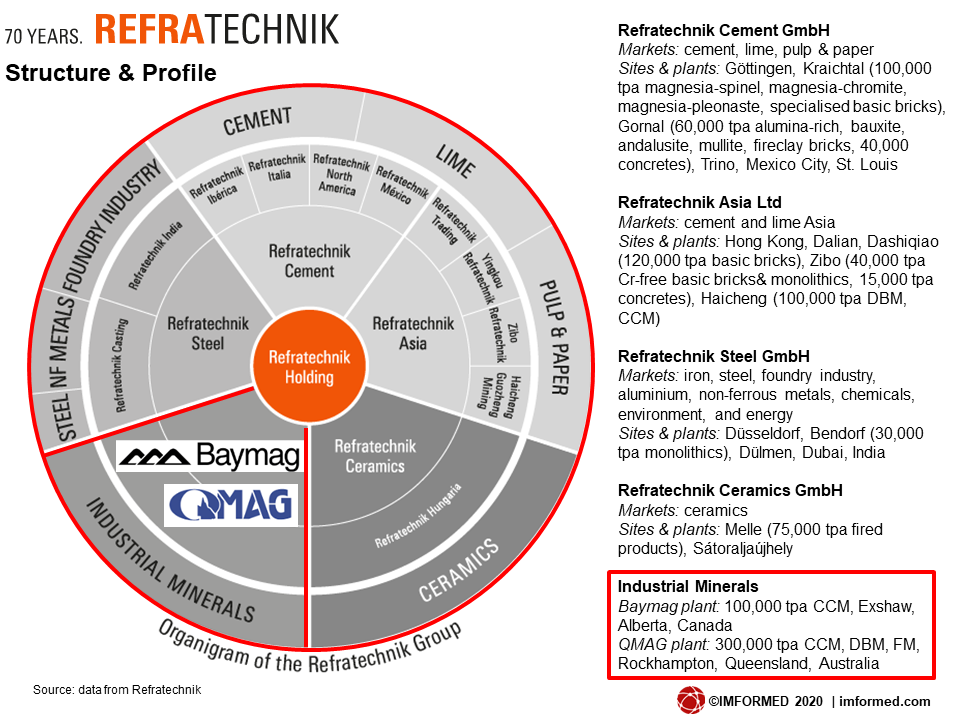 However, unlike its competitors, and despite owning a Canadian magnesite source, the group did not have a captive source of refractory grade magnesia, and had to rely on external supply from sources such as Nedmag, in the Netherlands.

In a magnesia supply world where consolidation and Chinese inconsistency has been the name of the game in recent years, and if the group is intent on securing healthy growth prospects, Refratechnik has decided not to be left behind in the vertical integration stakes and snap up one of the few key independent refractory magnesia producers available (the others are listed earlier). 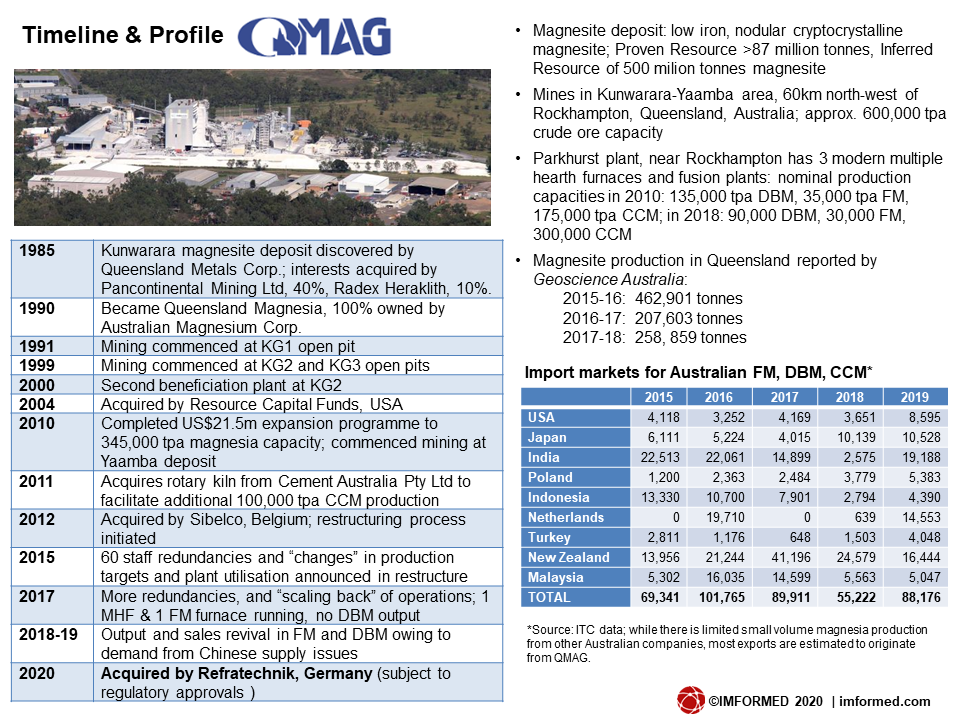 Dr. Franz Spachtholz, President & CEO, Baymag, told IMFORMED: “The Baymag and QMAG mines offer high quality and high grade raw material and long term availability to support our customers worldwide in- and outside the refractory business. This makes us independent in terms of fluctuations in quality from others.”

There are some significant factors for Refratechnik with the QMAG buy:

“QMAG and Baymag have a diverse product and customer portfolio in comparison to other producers of magnesia, and one of the few remaining fusing plants in the western hemisphere is definitely an asset.” said Spachtholz.

Refratechnik is thinking perhaps of further targets in non-refractory minerals and markets with many references to the group’s “Industrial Minerals Division” and “expansion of our range of products and services in the industrial minerals sector”, in its official communications on the QMAG addition. 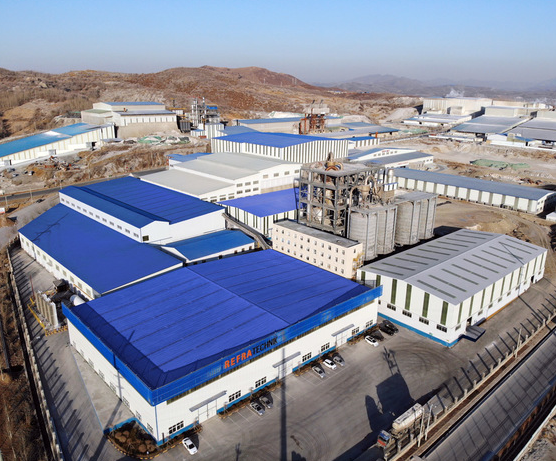 It is notable that the move also coincides with the company’s recent joint venture magnesia initiative in China, adding to its existing Chinese and Asian operations.

This represents the first such move in recent years of a major western refractory producer to invest in raw material sources in China. In January IMFORMED was told that the first calcination test run was “very successful”.

“Baymag, QMAG, and the JV in China gives us long term security in a time of uncertainty, consolidations and further polarisation” said Spachtholz.

Thus, Refratechnik has considered, and perhaps just in time, that it requires a major in-house refractory magnesia producer, and is now even thinking outside the refractory market space.

Alternative sources of magnesia: recycled from mine waste were covered at