The emergence of secondary raw materials becoming a more mainstream source of recycled industrial minerals is to increase in significance in the overall supply chain from mine to market.

However, the diversification of end use markets and the manufactured products consumed within them create differing degrees of complexity and varying rates of ultimate success in their ability to be recycled.

Recycling of glass, paper, and steel and metal scrap is well established. The recycling of slags, fly ash, and spent refractories for their contained industrial mineral values, although started some decades ago, remains in evolutionary phase, particularly with regard to developing high value market applications for the secondary raw materials.

The latest trends and developments in recycling industrial minerals from such waste sources is the theme of IMFORMED’s Mineral Recycling Forum 2017, 7-8 March 2017, Rotterdam.

Leading players active in sourcing and processing minerals from steel slag, aluminium slag, spent aluminium pot liners, gypsum wall board, glass, and waste refractories will be discussing the challenges and opportunities arising from this growing sector.

The prospect of a growing Li-ion battery (LIB) recycling industry is real, though not expected to impact the industry for at least ten years or more for a variety of factors. But it is coming.

This was the topic of a recent presentation by Mike O’Driscoll of IMFORMED: “Industrial mineral recycling in Li-ion batteries: Impact on raw material supply chain?” at the Global Battery Raw Materials R&D Symposium during the 7th International Advanced Automotive Battery Conference, held in Mainz, 30 January 2017.

With the clear signals that the LIB market is to take off owing to a dramatic rise in the use of electric vehicles (EV) in the near future, there is expected to be increased demand for lithium (by 2020 an additional 100-120,000 tonnes LCE needed) and graphite (by 2020 an additional 150-170,000 tonnes needed, of which around 75% will be natural flake graphite; estimates according to Benchmark Mineral Intelligence) required in LIB cathode manufacture. 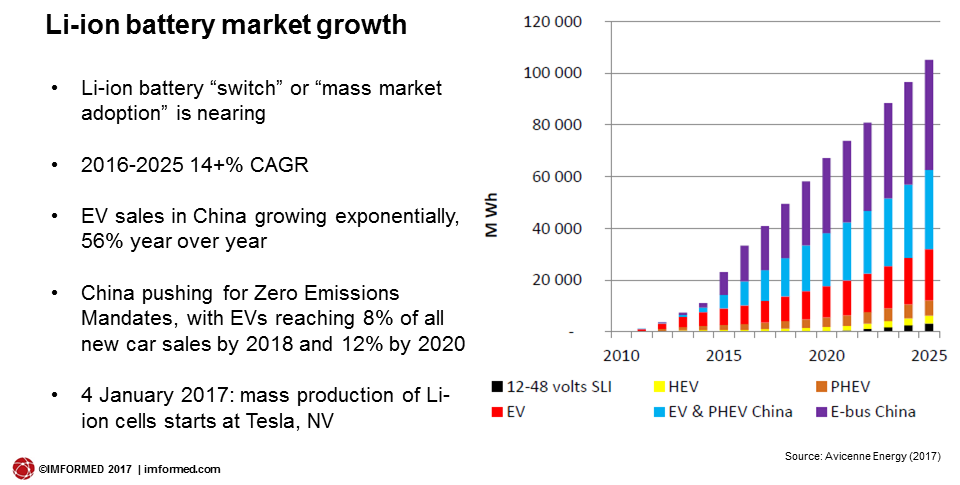 Naturally, this has come as good news to the many developers of lithium and graphite projects across the globe, as well as established producers which are looking to bring online capacity expansions.

However, what is also apparent is that in the future there is going to be an abundance of spent LIB coming into the market.

In its recent 2017 BP Energy Outlook, BP for the first time acknowledged the EV impact, with electric cars to rise significantly, from 1.2 million in 2015 to around 100 million by 2035, of which 75% were pure battery EVs.

Bloomberg New Energy Finance recently reported that more than 95 GWh of used batteries will be extracted from hybrid and electric vehicles by 2025, while the organisation Call2Recycle estimated that 12 million LIB will be available for recycling in the USA in 2020.

In a detailed study in 2015, the US Commission for Environmental Cooperation calculated that for North America almost 700,000 LIB EV batteries will reach their end of life each year by 2030.

Regarding the situation in Europe, figures are hard to come by, although a forecast just shy of 14,000 tonnes of LIB will be available for recycling. 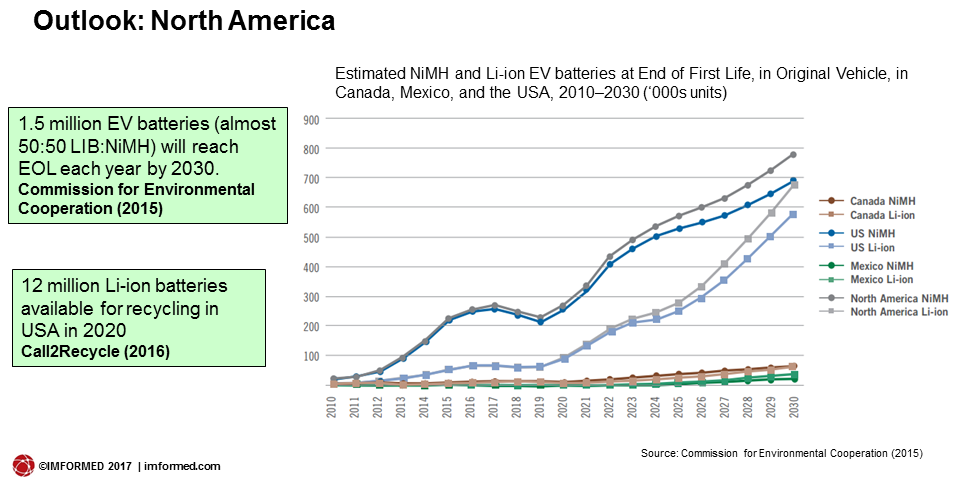 So where are we regarding LIB recycling technology?

The bottom line is that LIB recycling is very much in its infancy, with very few players committed to commercial scale operations and investment for the future.

Key challenges are that most current LIB recycling processes are aimed at recovering the high value metals, such as nickel and cobalt, rather than lithium, and certainly not graphite at present.

Moreover, at present there are simply not enough spent LIB around to justify any kind of serious investment in LIB recycling infrastructure.

Indeed, a comprehensive California Energy Commission Report published last year concluded that California is not likely to reach a sufficient battery pack disposal rate to justify a pilot-scale LIB recycling facility running at full capacity until 2030, and a commercial-scale facility not until after 2050.

This is not to suggest that no work is being undertaken in this area: far from it. There are a number of companies, consortiums, and organisations pursuing lithium, and even graphite, recycling from LIB using a combination of mechanical, hydrometallurgical and pyrometallurgical processing. 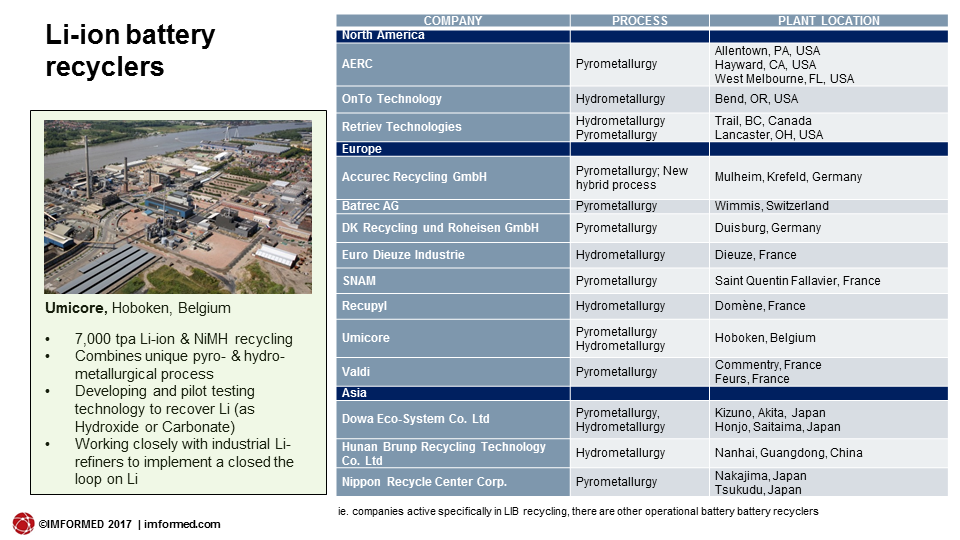 Elsewhere, Tesla has stated that it plans to recycle LIB at its Sparks, NV Gigafactory, and in Europe at Umicore, while Renault and Nissan have each announced partnerships for development of second lives for EV LIB (once LIB have exhausted their usefulness EVs, they do retain sufficient charge (approx. 70%) to have a secondary use in certain applications, such as grid storage, an area being researched; note this will also contribute to a “delay” in their availability for recycling, thus making estimates of LIB recycling volumes hard to predict).

The main challenge is to develop an feasibly economic and technically efficient process that can be brought up to commercial scale.

Key among the primary factors in successful LIB recycling processes will be:

In summary, LIB recycling remains in its infancy, and its impact on the primary raw material supply chain will remain negligible until at least 2030-40.

But it will play an increasing and important role in the battery raw materials supply chain, since EV LIB in use now and in the near future will eventually reach the end of their lives, and EV LIB consumption is set to boom.

Mike is also presenting
Recycling industrial minerals: a not so “secondary” raw material source
at the Industrial Minerals & Aggregates: Innovations in Industrial Minerals session of
2017 SME Annual Conference & Expo, 22 February 2017 in Denver.
The theme of the event is “Creating Value in a Cyclical Environment”