The significance of the acquisition is that it now provides FBX with its own calcination facilities, to enable supply of calcined refractory grades to the US market.

Until now, FBX, which started bulk shipments from its 340,000 tpa capacity high purity (63% Al2O3) raw bauxite mine in mid-2020, had been limited to selling raw washed and sized ore, or calcining it through third party plants in the USA, and through ARCIRESA, Spain (see Guyana bauxite newcomer starts bulk shipments).

USC, now a wholly-owned subsidiary of FBX (in turn owned by Resource Capital Funds, Denver), produces lightweight ceramic proppants, based on regional kaolin feedstock raw material, which are used in hydraulic fracturing (fracking) operations in the oil and gas industry.

The move also allows USC to expand its product lines to a full portfolio of ceramic proppants, from its original lightweight grades, using kaolin, to now include intermediate and high strength, and a patented Ultra High Strength Proppant, all produced with FBX’s high grade bauxite.

Thibault Van Stratum, Executive Chairman of FBX, said: “The acquisition will also permit USC to step into other market segments such as refractories, flame retardants and chemicals that can utilise the special characteristics of the low impurity FBX bauxite. The access to cheap and clean natural gas as energy source is critical to remain competitive and to avoid contaminants in some applications.”

Certainly, with world trade of commercially developed sources of refractory grade bauxite limited to just China (bauxite-rich provinces of Shanxi, Guizhou, and Henan) with its ongoing supply problems, and the Linden, Guyana operations also owned by China (through Bosai Minerals Group), the long-awaited emergence of FBX as an alternative source has been welcomed by the world’s refractories industry.

John Karson, Vice President of Sales and Marketing, FBX commented: “The processing capabilities of the two plants will open the door for a replacement of Chinese-produced bauxite at a time when there are major issues with consistency of supply from China. Guyana was a leading producer of non-met bauxite until the mid-1980s, when lower quality and cheaper priced Chinese bauxite flooded the global market. Now the tide is turning.”

Other players are also sensing the opportunity, such as Bautek Minerais Industriais Ltda in Brazil, which has made significant investments to launch itself as a new force for global non-metallurgical bauxite and refractory clay markets (see New dawn for Brazilian bauxite).

It’s been a while coming, certainly this author first heard of the Bonasika discovery and potential back in the mid-2000s. But, as they say, all good things come to those that are patient.

FBX’s journey has taken them through several management teams and business plans, and like many others, it was initially lured to the ceramic proppant market bonanza around 2012 (more on that later), before returning to what most in the refractory industry have long-considered Guyana non-met. bauxite best at, ie. producing refractory grades.

2019 marked an intense uptick in investment in Guyana, development and progress for FBX with construction of the Bonasika mine, washing plant and shipping wharf completed by the first half of 2020. 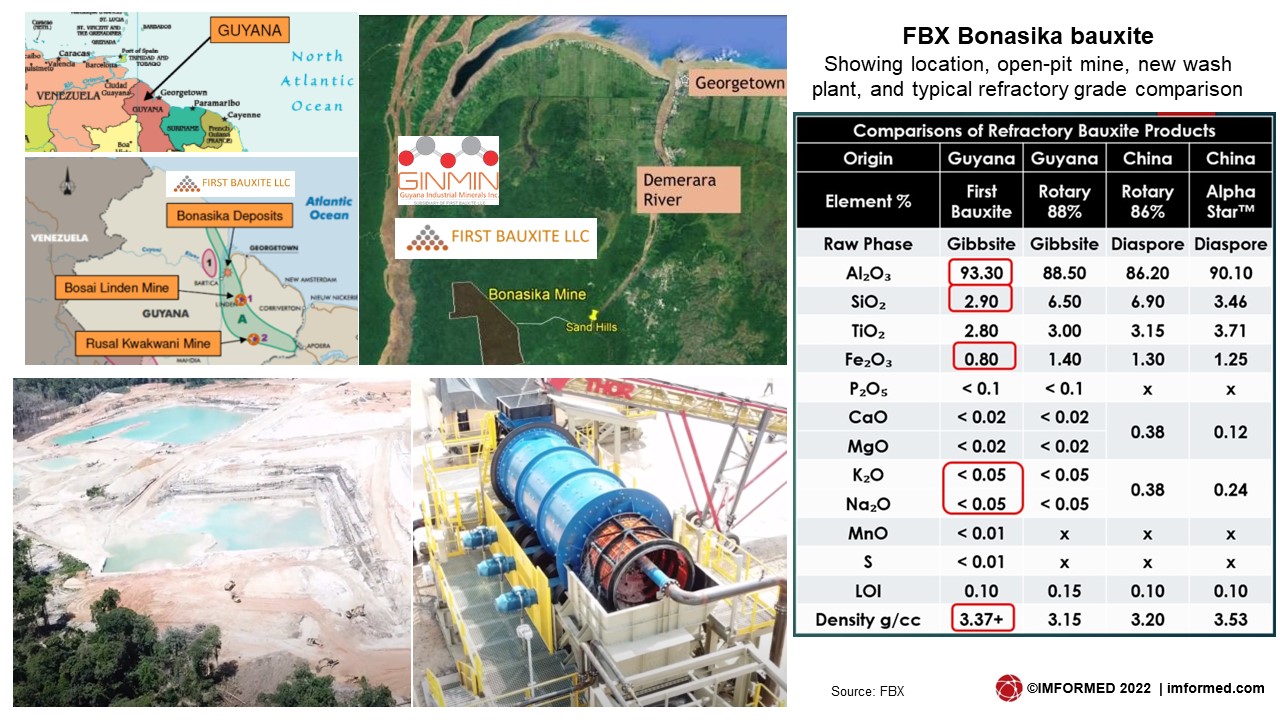 Sales levels reached 240,000 tonnes in 2021, the first full year of operation, and resulted in sustainable cash flow generation. The operation, run by wholly-owned subsidiary Guyana Mining Co. (GINMIN), is envisaged to be at full capacity, 340,000 tpa, for 2022.

While FBX’s strategy is global, it remains fully committed to add significant capital investment and improvements to its Guyana operation in the next three years, including several downstream processes (including one or more kilns) to capture more value addition in country. The prospect of access to natural gas in the coming years will further increase the potential for high quality products being manufactured competitively in Guyana.

Incidentally, the oil and gas industry in Guyana is growing rapidly, which will improve the country’s infrastructure prospects, such as plans for two new deep-water ports, which, while driven by the oilfield surge, will assist FBX’s export potential. 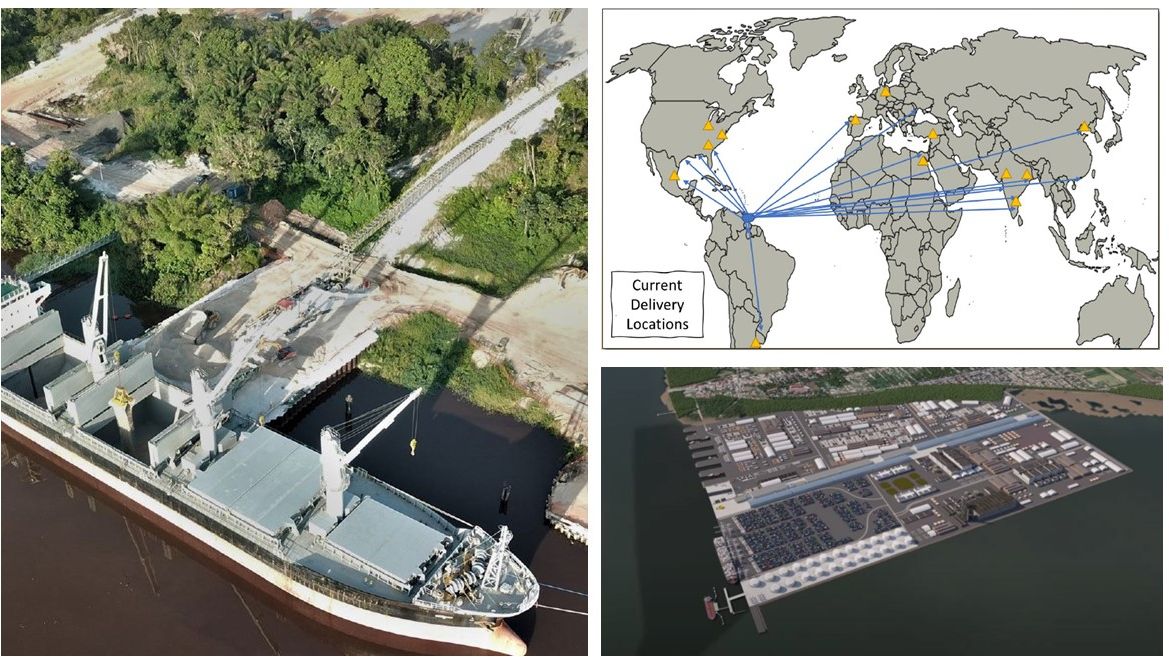 FBX commenced bulk shipments from Bonasika in mid-2020, seen here loading at the new wharf near Georgetown, and showing FBX distribution routes to date, larger tonnages are transloaded in Trinidad; exports into Savannah, NOLA or the Gulf of Mexico are envisaged to supply nearly all the USA’s refractory needs. The planned new US$300m deep-water ‘Port of Vreed-en-Hoop’ (bottom right), at the foreshore, Plantation Best on the west bank of the Demerara River, near Georgetown, will assist FBX’s export potential. Courtesy FBX; Jan De Nul Group.

Now, back to that ceramic proppant market boom about a decade ago: well, if it wasn’t for that then US Ceramics would not have existed, and FBX would have been seeking calcination capabilities elsewhere.

Although not a new concept (pioneered in Oklahoma in 1949, and advanced in the 1980s), the recent surge was driven by demand for cheap energy, but crucially, in combination with advances in horizontal drilling and hydraulic fracturing technology, and mineral proppant development, which enabled exploitation of vast hitherto unattainable unconventional gas (and oil) resources. 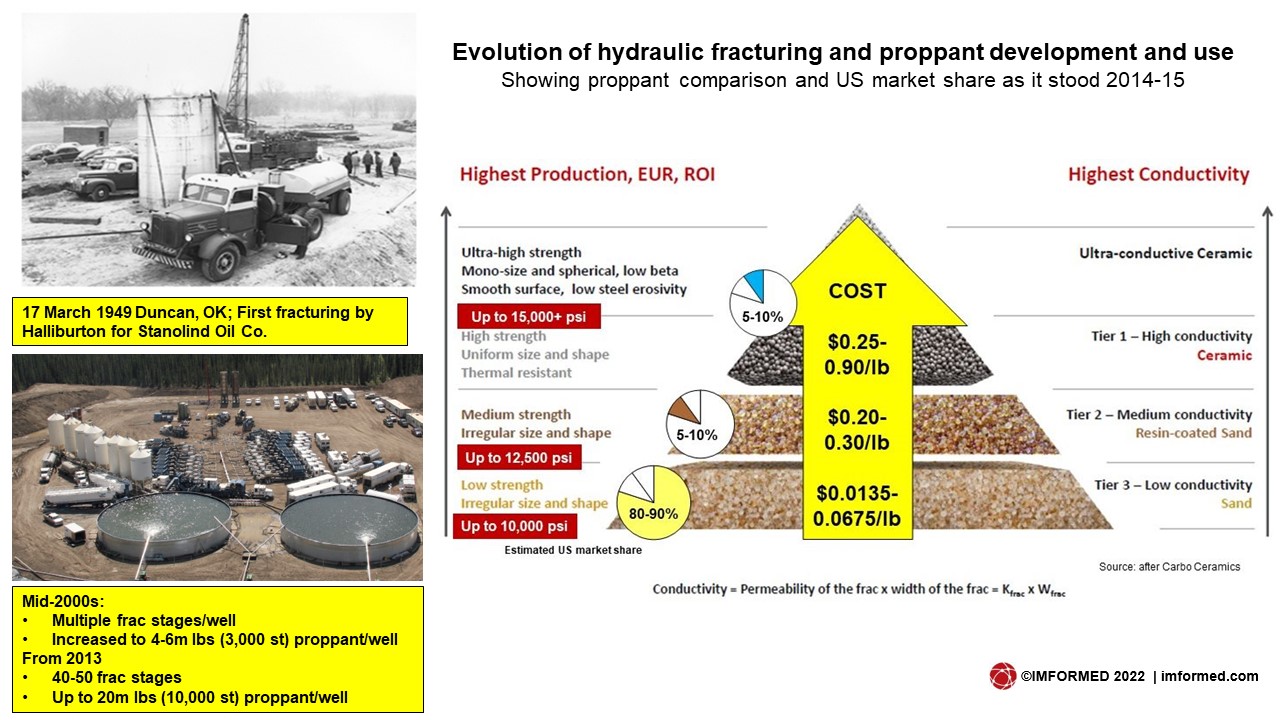 The well-established US ceramic proppant producers Carbo Ceramics (kaolin and bauxite-based) and Saint-Gobain (bauxite-based) expanded their facilities and were later joined by a plethora of mostly smaller-scale developers/start-ups using kaolin, bauxite and other raw materials (including fly ash, refractory clays, serpentinite – latter grades exported from Russia to North America by Fores).

By then, Paris-based world industrial minerals group Imerys, hosting supply facilities of pretty much most major oilfield minerals across its extensive portfolio (excepting barite and frac sand), started to set up an Imerys Oilfield Solutions division.

The group had up to then conducted some limited ceramic proppant development at its Domodossola facility, Italy, through Treibacher Schliefmittel SpA (rod-shaped proppants based on bauxite).

But in 2012, Imerys invested around US$100m in its Mulcoa Plant 5 (“Gemini”), at the C-E Minerals site at Andersonville, Georgia, to produce kaolin-based proppants, capacity around 100,000 tpa.

This was followed in April 2013, by the acquisition of PyraMax Ceramics by Imerys for US$235m. In July 2013, the Wrens plant started commissioning.

Alas, Imerys (and others) had joined the proppant party too late; by 2015 the market had crashed with rising costs, lowering oil prices, falling drilling activity, and a crucial move by E&P companies to swamp fracking operations with the much cheaper frac sand supply on offer by then. US ceramic proppant producers had also been hampered by large volumes of imported lower quality but cheap Chinese ceramic proppants. 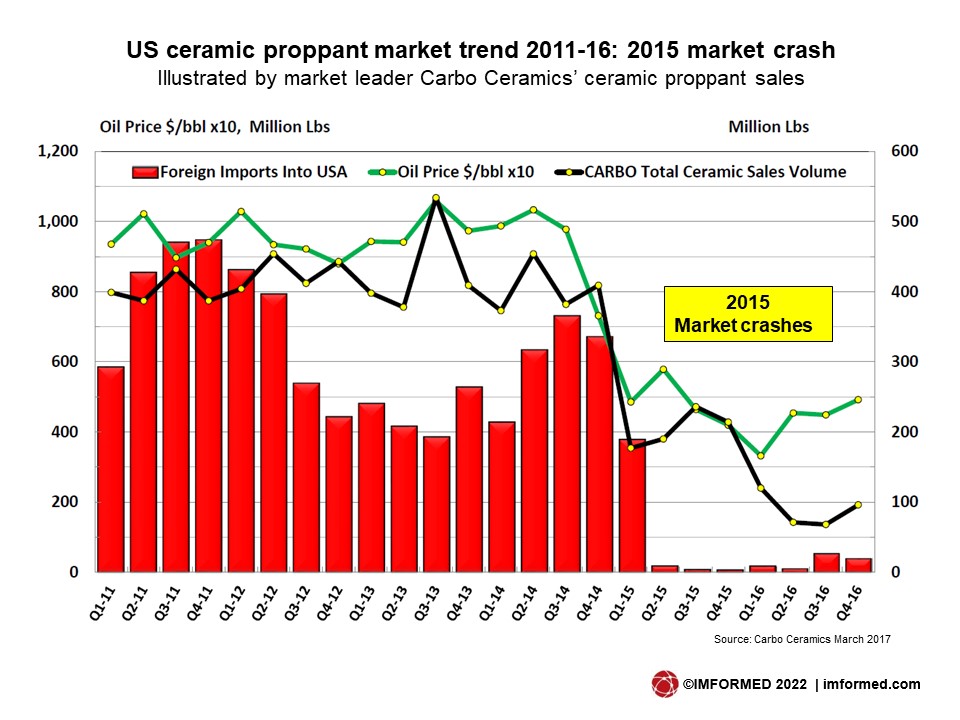 While ceramic proppants are far superior in performance compared to frac sand, they are expensive (by some 4-6x); that said, they remain in (much reduced) demand for important specific fracking applications, eg. in deep high temperature, high pressure wells.

The upshot was tough times and 2015-16 saw widespread capacity reduction, idling, closing, or divesting of most of the ceramic proppant plants across the USA, with many having to embark on diversification strategies, eg. Carbo Ceramics, having filed for Ch.11 and taken over by Wilks Brothers LLC, now into foundry, grinding media (for full review of market changes see Proppants: Carbo Ceramics idles US & China plants in 18% capacity cut; Ceramic proppant outlook: trying to build a market on sand).

A leveraged management buyout in 2019 created US Ceramics LLC as the plants’ operating company, based in Denver, in which Imerys held a minority stake.

So, after the proppant market fall out, enter FBX looking for suitable calcining facilities within reach of Guyana. FBX has now eventually settled on US Ceramics’ assets, described as “the last and largest opportunity to put a hand on some of the most efficient mineral processing & calcining assets.” 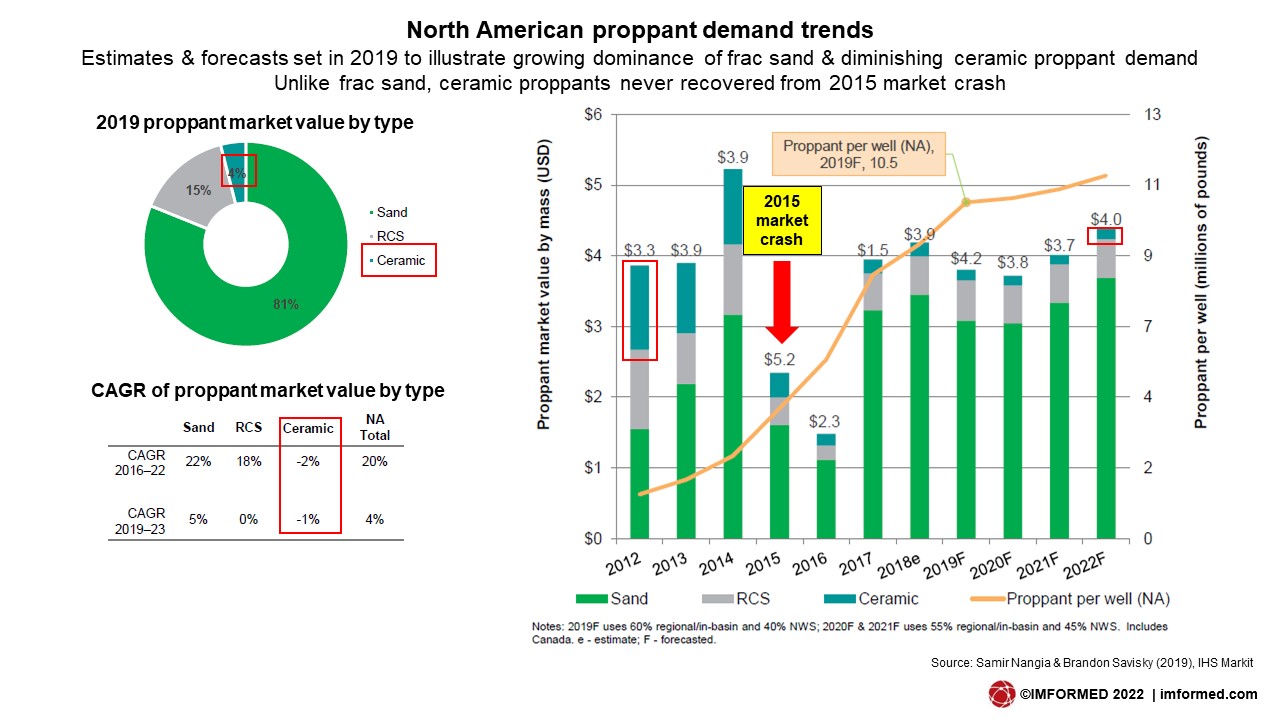 Catch the latest trends and outlook for the proppants market at

The USC buy now provides FBX with key capabilities, in particular, calcination facilities to supply the US refractory market’s requirements for sintered bauxite from 88-93% alumina with low impurities, but also to utilise USC’s processing and logistics assets and know-how.

Karson also commented: “On flame retardants: milling our raw bauxite will fill supply constraints of ATH for construction, carpet backing, plastics and polymers, and electric cabling. Other customers are finding many more uses for such high grade bauxite in the production of foundry sand replacement beads, coatings, zeolites and other proprietary uses.”

The Russian invasion of Ukraine has stimulated interest in oil and gas production in non-Russian areas from the Gulf of Mexico to the North Sea, Middle East, Africa, India and the domestics plays in the USA. So, a revival in ceramic proppant demand to some degree is on the cards in North America.

Meanwhile, on refractories market outlook Karson commented: “The Chinese dominance of refractory minerals is over; the CAGR of refractories is skewed heavily toward non-Chinese sourcing. The supply of raw materials and some finished goods is at its tightest in many years, suppliers have raised prices in related product lines by 25% as availability is low; we are anticipating a strong outlook in the post-Covid era.”