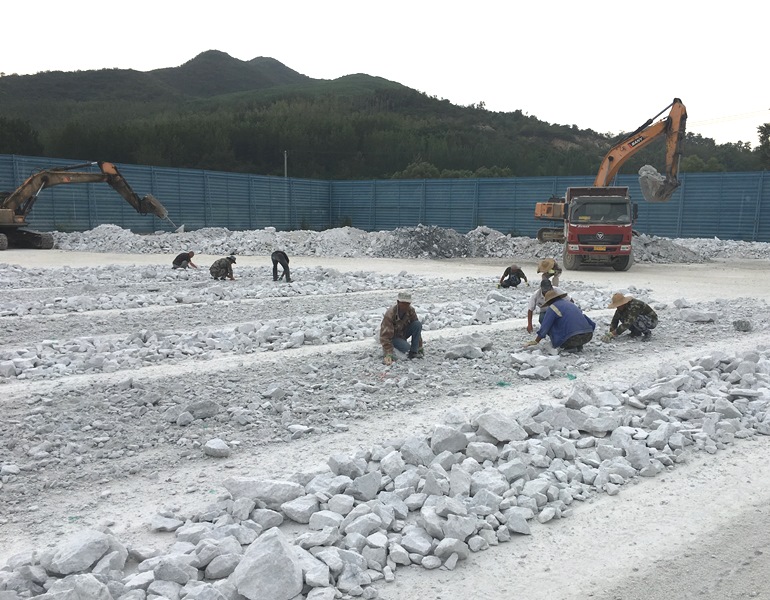 Hand sorting high grade magnesite from the underground mine of Haicheng Haiming Mining Co. Ltd, one of Liaoning’s newest state-of-the-art producers of CCM, DBM and FM.

It’s happened a few times before: during the SARS outbreak of 2003, the Beijing Olympics of 2008, and most recently the 2017-19 anti-pollution drive, but this time the impact is being felt deeper and wider, and crucially, perhaps longer term.

The outbreak of the coronavirus (COVID-19) in Wuhan, Hubei, and the subsequent clampdown on movement in the country has paralysed mineral supply during the first quarter of 2020 from the world’s largest industrial mineral exporter, China.

With Chinese workers only just returning to their operations after an extended Chinese New Year break (indeed some have yet to return), the resumption of industrial mineral supply is expected to be slow, if at all in some cases.

Mineral consumers in the West, particularly refractory and ceramic manufacturers, are going to be very short on stock and will need all their lateral thinking powers to secure alternative and sufficient raw material supplies from elsewhere.

So what types of minerals are we talking about, and where are they typically being shipped to in the world?

China is supremely gifted with large natural resources, and as such commands a dominant position in world supply of industrial minerals, ahead of the USA, Turkey, Germany and India (see chart). 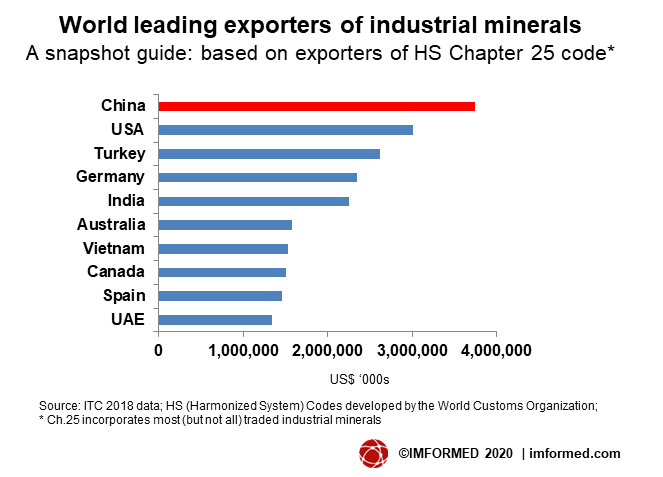 The table below illustrates a snapshot of the main industrial mineral exports from China in terms of volume and value in descending order. Of significance is China’s leading role in supply of certain minerals indicated as accounting for a ≥10% share in world export tonnage. 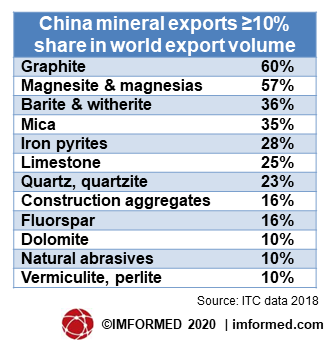 Note: these figures are deduced from the most recent complete global trade data, 2018, using the HS (Harmonised System) Chapter 25 code which incorporates most, but not all, natural industrial minerals trade, and is taken, for brevity, at its first level, ie. before subdivision of mineral groupings (eg. “Clays, sillimanite minerals, mullite”), except for Fluorspar, which has been separated (from Feldspar!) for clarity and significance; certain other commodities, particularly synthetic minerals, are categorised under metallic ores, chemicals, and miscellaneous – however, it suffices in this context to provide an approximate overview guide to Chinese industrial minerals trade. 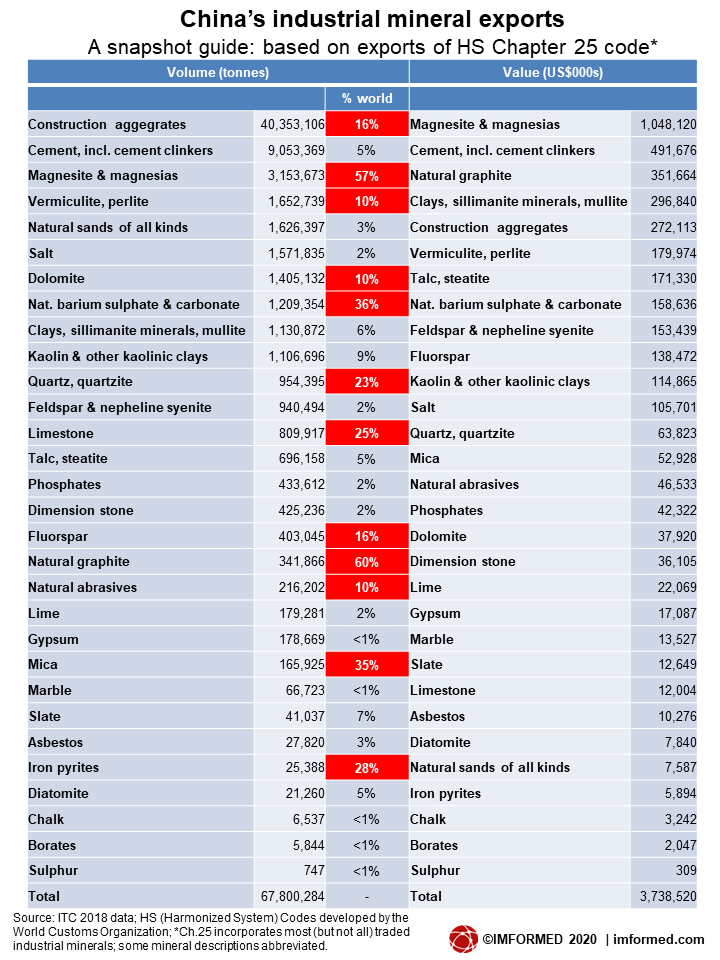 And where is this 68m tonnes of minerals heading each year? The primary market destinations are Japan, USA, Europe (via the Netherlands), and Asia (South Korea, Taiwan, India, and Indonesia). 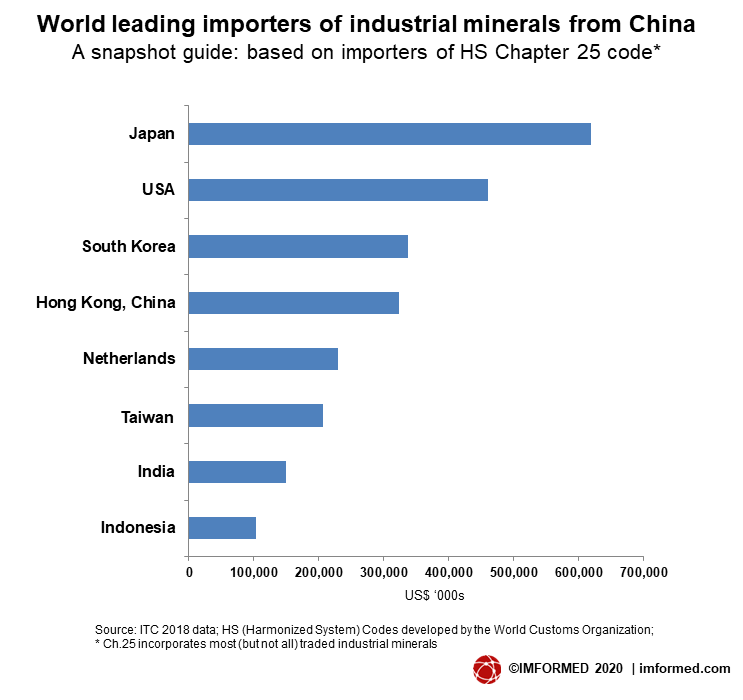 Hong Kong is listed as a China “importer”, although most of the minerals are probably conveyed to other destinations in Asia via Hong Kong ports, much like in the Netherlands where imports via Rotterdam and Amsterdam supply the European hinterland.

It will be these market destinations which will be feeling the pinch with restricted supply.

After Japan, the USA is China’s second largest export market for industrial minerals. In all some 20 minerals are sourced from China for US markets.

The chart below shows on which minerals the USA is heavily net import reliant: of a total of 28 industrial minerals imported, 23 are ≥50% import reliant, of which 16 are sourced from China, including 8 on which the USA is 100% reliant (bauxite, fluorspar, graphite, mica, rare earths, scandium, yttrium). 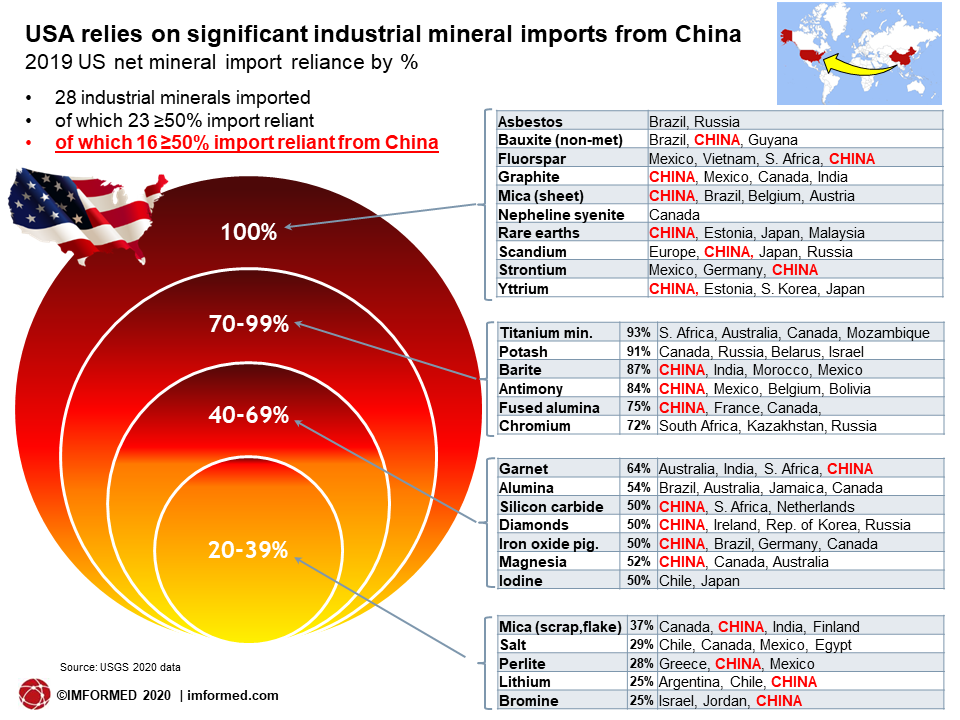 Dr Steven Fortier, Senior Policy Advisor, Executive Office of the President, Office of Science and Technology Policy, USA will be speaking on
“The security of critical mineral supply chains: the US Federal Government policy perspective”
at the 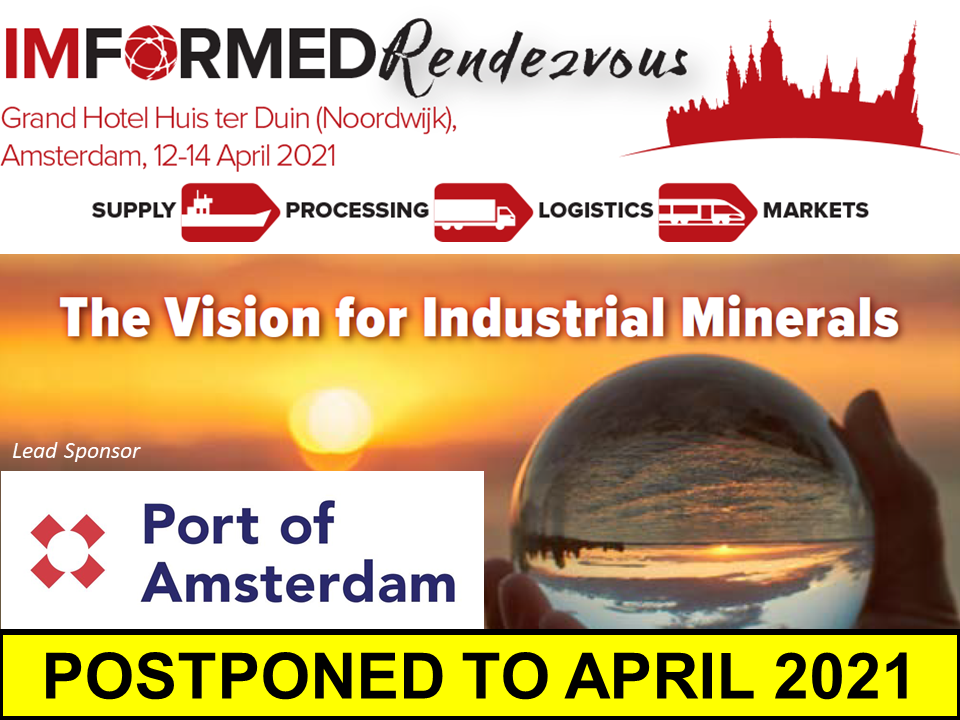 China has long been an important source of refractory minerals for Asian and Western markets.

The world’s refractory bauxite supply is restricted to very few sources of economically developed deposits, and is pretty much run by Chinese companies in Shanxi, Guizhou, and Henan provinces in China, and in Guyana.

A look at the export markets for specific Chinese refractory exports indicates that leading consuming markets are in USA, Japan, India, South Korea, and the Netherlands (latter a conduit to European consumers) – all leading steelmaking countries. 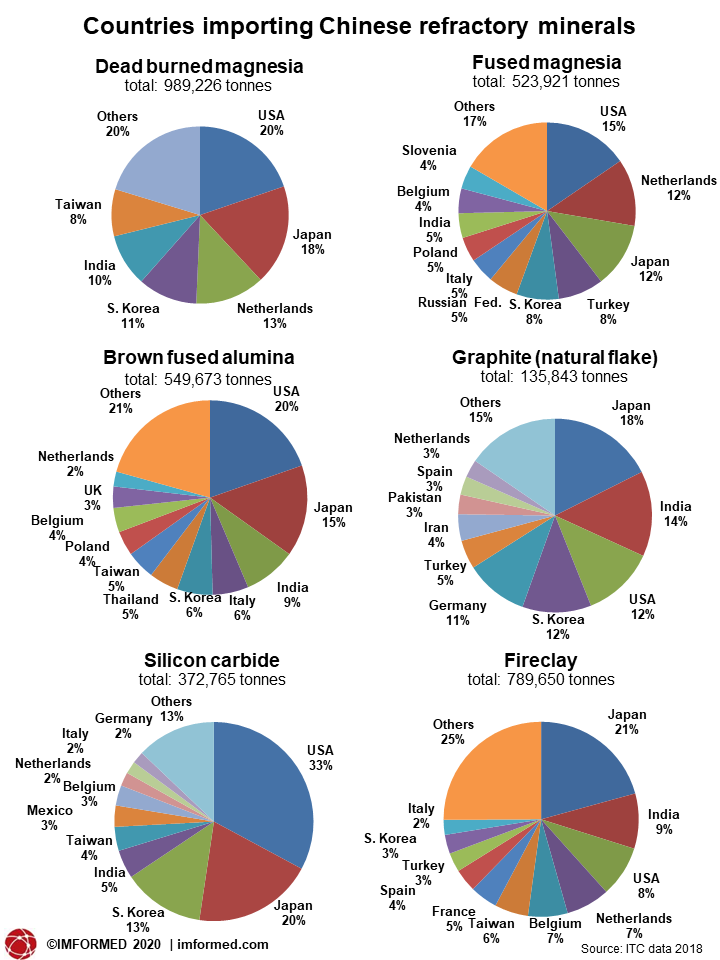 The map below illustrates the general location of China’s primary sources of refractory minerals. It is significant that many are inland and situated some distance from key ports for export. 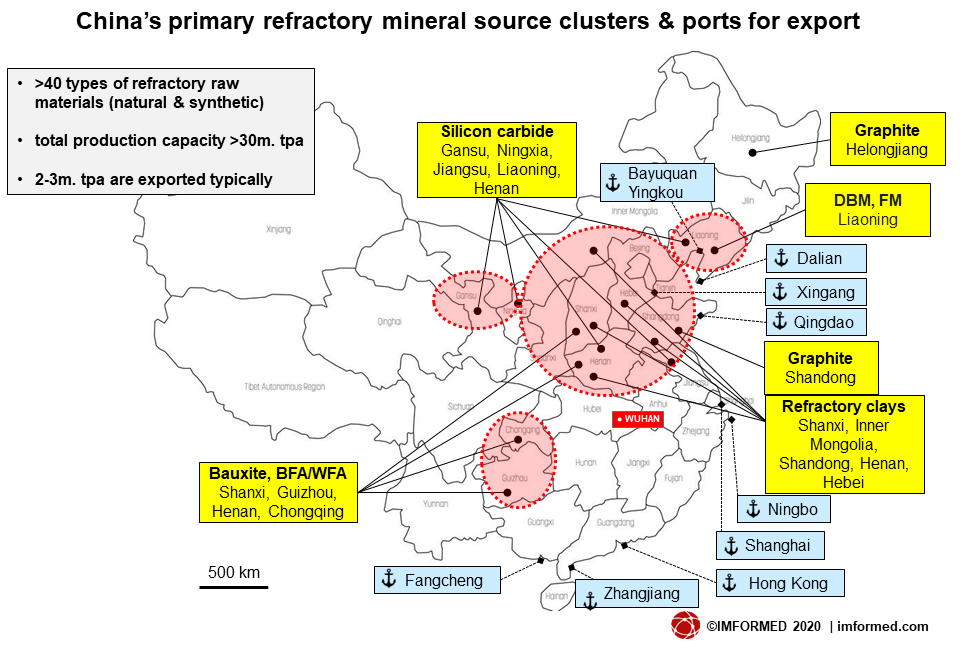 China gets back to work, but logistics remain an issue

With the government’s recent clampdown on travel and workers’ return to work delayed, resulting in difficulties in drivers accessing their trucks and conducting mineral shipments, there is an unsurprising disruption of movement of minerals from source to port, thus delaying supply to overseas markets.

Overall there has been a gradual return to work in China since 10 February, but there are regional differences in travel restrictions and all-round disruption to train/bus/flight schedules.

Quarantine periods in parts of Henan province, for example (bauxite and fused alumina production centre) have increased to 21 days.

During the last two weeks, companies “above a designated size” (ie. apparently those with an annual income of RMB20m. or US$2.85m) have resumed operations in much of China’s main industrial areas (apart from Hubei).

Naturally, China’s economy has been hard hit and it may be some time before we can really estimate the extent of China’s economic recovery from COVID-19 since many smaller businesses below the “designated size” will have been severely impacted. 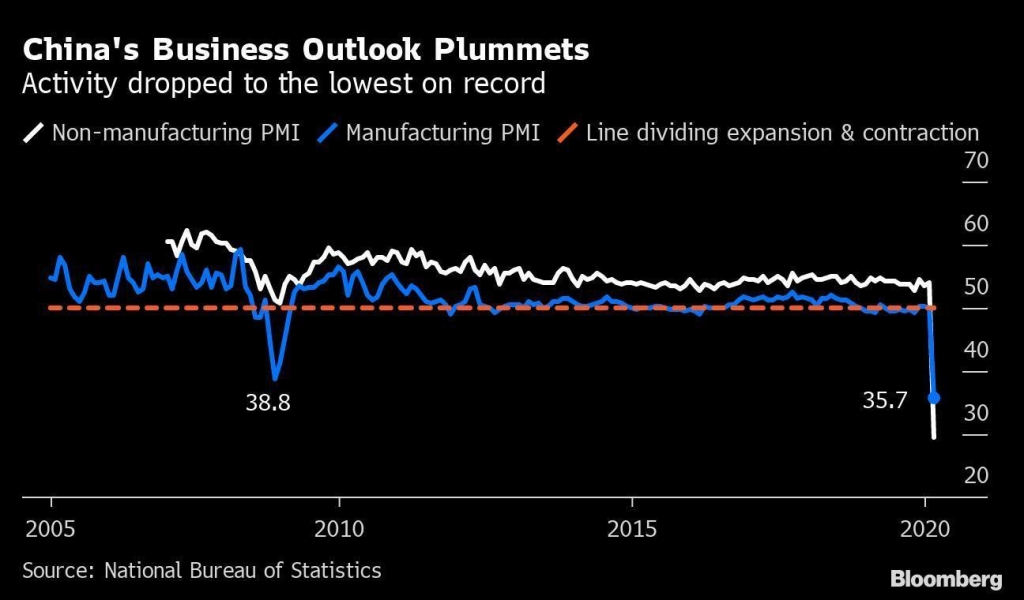 Thus companies are receiving a drip-feed of returning employees from their Chinese New Year destinations, often further delayed owing to imposition of 14-day or more quarantines prior to attending their place of work.

Magnesia production has resumed in Liaoning, although output is described as lower than that of Q4 2019.

Transport restrictions in Liaoning have been lifted and roads are now open to the ports (eg. Bayuquan, Yingkou, Dalian).

Of course, transport restrictions remain in place to and from Hubei province, whose capital is Wuhan.

In general, trans-provincial truck transport is described as “still scarce”. This will be felt keenly by the more inland suppliers of bauxite, refractory clays, graphite, fused alumina, and silicon carbide.

In particular, truck transport disruption is being caused by bureaucratic delays in applying for permits and health inspections of drivers arriving from other provinces and consequent isolation measures after their arrival at their destination.

In Tianjin, where there are several major companies processing crude refractory minerals, especially bauxite and flint clay, prior to export via Xingang port, plants are only now starting to resume operations amid local government restrictions.

IMFORMED understands that at least one refractory bauxite supplier has declared interruption in deliveries to Europe owing to the current environment.

With shortages of calcined bauxite its price has increased during the last two months, quoted as nearing US$400/tonne FOB, while other minerals’ prices appear less affected at present, although magnesia prices have been declining. Refractories Window (Refwin) reports that brown fused alumina, white fused alumina, silicon carbide and industrial alumina faced no significant price fluctuation  although deliveries “became impossible” in February. Magnesia saw a RMB100(US$14.5)/tonne downward trend by the end of February. 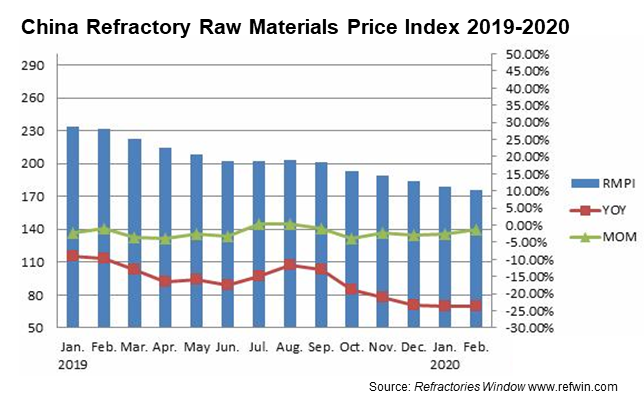 Any vessels berthing at Tianjin, Dalian and Xiamen ports are required to provide a health declaration before berthing. Meanwhile anti-virus procedures are causing congestion and a backlog of container freight activity in Chinese ports.

Chinese government agencies have recently announced a series of measures aimed at getting the country’s truck freight networks and ports back on track again, although how soon any “normal” service can be resumed remains uncertain.

As well as disruption to mineral shipments, transport costs have also risen by some 60-70%, eg. train freight to Tianjin from Shanxi is now around RMB1,560/tonne (US$224/tonne). 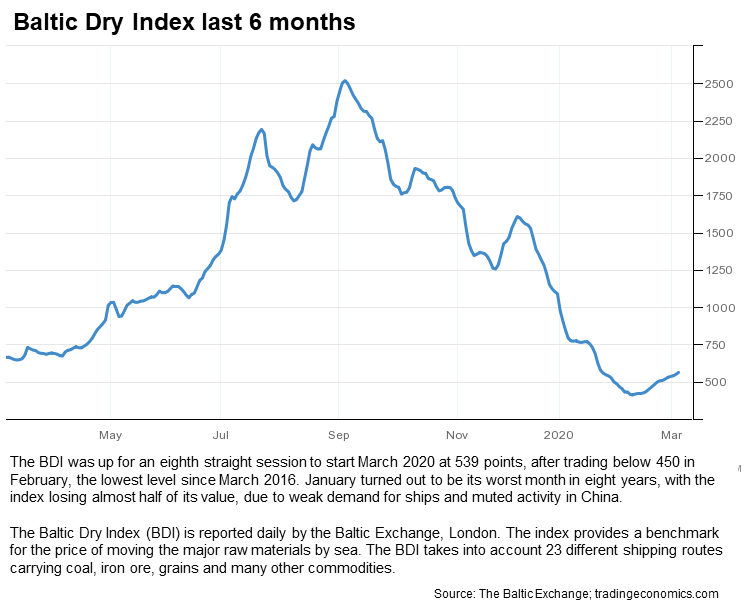 Field Trip to Haicheng magnesite operations of Haimag
On 1 February 2020, Haicheng Magnesite & Refractory General Plant changed its name to Haicheng Magnesite Group Co. Ltd – Haimag. Haimag has also recently started up a new flash kiln facility with an annual output of 200,000 tonnes of “high activity magnesia” which will be part of the visit on Thursday 18 March 2021. Full details here

The upshot is that industrial mineral consumers of Chinese minerals should expect supply shortages in March, April and May at least, and perhaps through to June while mines, plants, and transport networks slowly get back to business.

This latest impact on China’s mineral supply chain, and coming pretty much straight after the (continuing) ramifications of pollution control instigated in 2017, has naturally highlighted markets’ high import reliance from China and revived the drive to seek alternative sources of supply.

There is much talk of an “economic decoupling of China” from traditional supply chains by some developed countries and the next few years may see a major change in mineral sourcing options.

There has already been some success in recent years in getting bauxite (eg. First Bauxite, Guyana), magnesia (eg. Ternamag, Greece), graphite (eg. Syrah Resources, Mozambique) and fluorspar (SepFluor, South Africa) projects off the mark outside China, as well as ongoing interest in increasing vertical integration by refractory producers (eg. Refra acquisition of QMAG).

With this latest stimulus, the start of the 2020s may well herald another surge in global mineral project development in order to lessen markets’ reliance on China’s mineral resources.

COVID-19 Virus: Ensuring the health and safety of our attendees, exhibitors, partners & staff is our top priority. IMFORMED is diligently monitoring the situation, assimilating advice, and assessing contingencies regarding the latest developments with the coronavirus (COVID-19). We will advise delegates as/when appropriate regarding any impact to our events’ dates and venues, which remain in place until further notice.  More details & Precautionary Advice