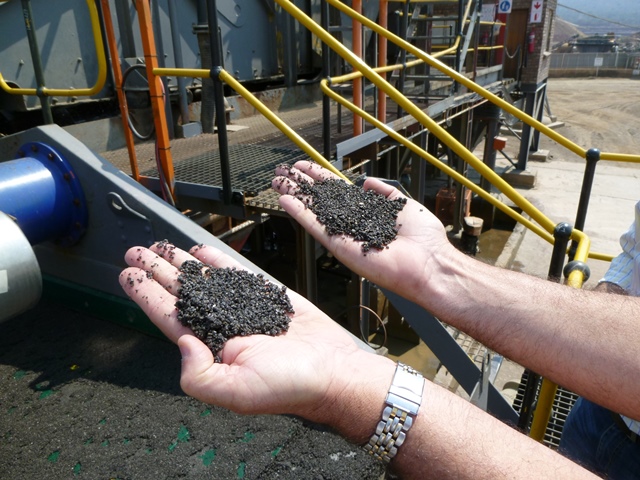 And the winner is…the Competition Tribunal of South Africa, plus consumers of andalusite for refractories: no mixed up envelopes in this drama.

Not a lot of details on the judgement have emerged at present, mainly owing to the amount of competitively sensitive information the judgment contains.

Imerys then registered an Appeal which was scheduled to be heard on 15 December 2016, and now the result of that Appeal has been released.

This must surely finally quash Imerys’ hopes of amalgamating one of the world’s two independent producers of the refractory mineral andalusite. 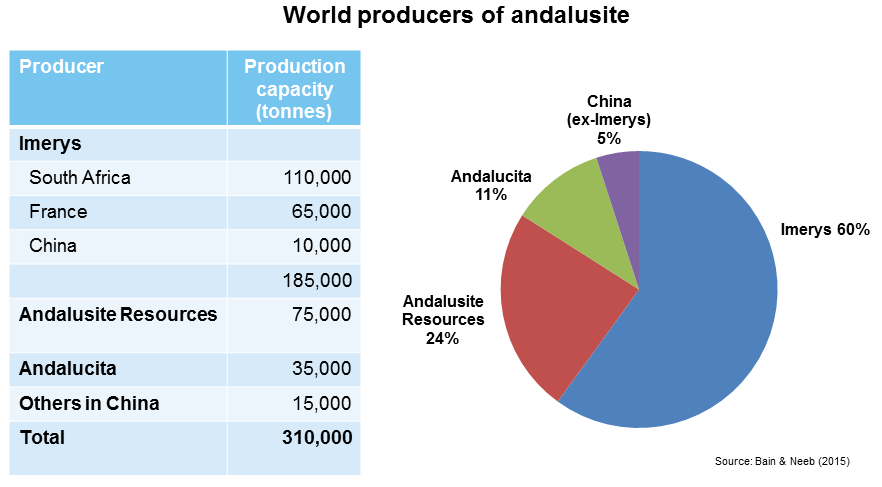 In a statement released today, the Commission said it had received numerous concerns from both producers and end-users of andalusite based refractories regarding the effects of the proposed merger.

In particular, producers and users were concerned that, as a result of the proposed merger, they would be deprived of competitive choice between Imerys and Andalusite Resources for andalusite, and that the merged entity would increase the price of andalusite locally or increase the amount it exported.

Consumers also emphasised that they cannot easily switch between andalusite-based refractories and refractories containing other raw materials (such as bauxite, which enjoyed capturing a limited market share) in their production processes and that switching would involve high costs.

The Tribunal rejected argument by the two companies that in the absence of the proposed merger the two companies would become capacity constrained and would accordingly raise their andalusite prices to export parity levels, with the result that the merger would not have any effect on their market power.

The Tribunal also raised concerns that the merger could be used to control availability of andalusite in the market. Andalusite Resources and Imerys are by far the largest suppliers of andalusite globally and the former has more than half of the SA market. 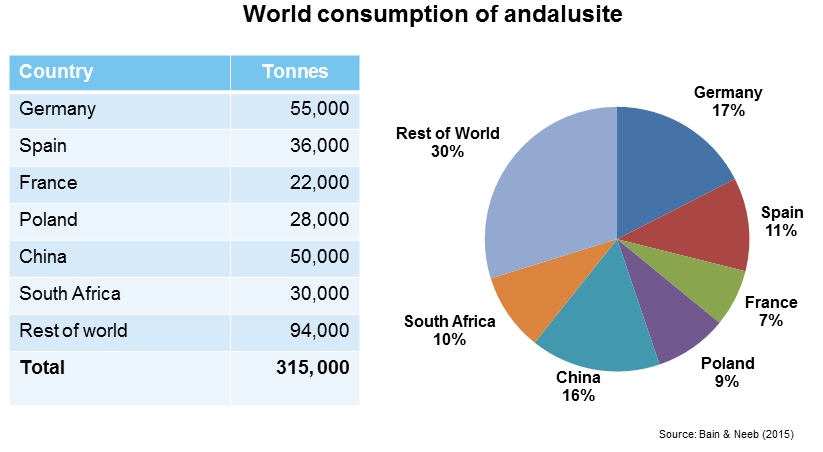 Apparently, the merging parties’ own internal strategic documents revealed that Andalusite Resources had become a formidable competitor to Imerys in the mining and sale of andalusite in South Africa and that it had taken significant market share away from Imerys in recent years.

The documents further show that Imerys was very concerned about this, as well as overcapacity that existed in the mining and sale of andalusite and it devised strategies to limit that overcapacity. The acquisition of Andalusite Resources formed part of that strategy.

“Not only has Imerys reduced its andalusite production capacity by closing down its Krugerspost mine in South Africa, it has also closed its Yilong mine in China and now intends taking over its only competitor in South Africa, “ the Tribunal said in its reasons.

The Tribunal concluded that the relevant counterfactual is the status quo, ie. a situation where at least one or both of Imerys and Andalusite Resources will not (permanently) be capacity constrained.

Imerys on an M&A roll

The Andalusite Resources acquisition dismissal has somewhat spoilt the M&A party which Imerys has been enjoying over the last year or so.

Having completed in early 2015 the acquisition of the massive and diverse portfolio of S&B Industrial Minerals (see Imerys seals S&B acquisition: so what does it mean? 6 March 2015), one may have thought that the Paris based group would have had its hands full for the next year or two picking over and sorting the gifts of the Greeks.

But no, we are talking IMERYS here! Into 2016 and by July next in line is speciality aluminas producers Alteo and Alufin, the transaction of which was completed in October after EC approval on condition of divestment of Alteo ARC’s white fused alumina business in La Bâthie, France. 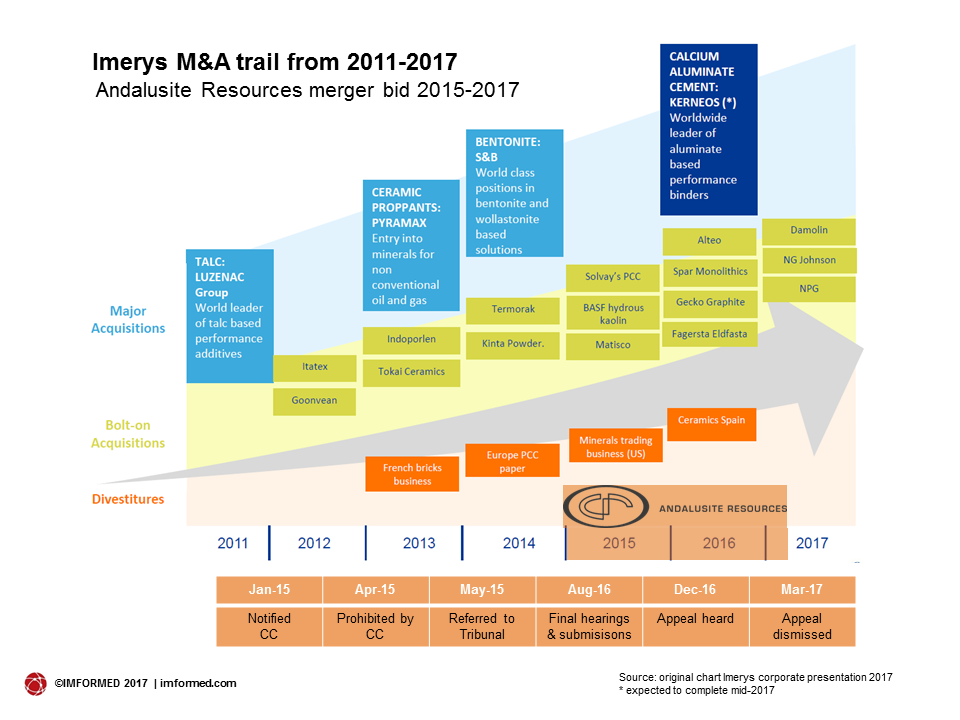 Then in December, less than two years since the S&B buy and while appealing against the SA Tribunal’s decision on Andalusite Resources, Imerys makes another major acquisition, this time of calcium aluminate cement leader Kerneos.

The deal remains subject to relevant workers’ council consultation, as well as regulatory authorities’ approval and is expected to be completed by mid-2017.

While the Kerneos buy is a nice fit and addition to Imerys’ refractories arm, Calderys (which also picked up monolithics producer SPAR Inc. in September 2016), it also brings, or rather completes, for Imerys the rest of the Greek bauxite resources.

Just before the S&B acquisition by Imerys, S&B had divested its bauxite resources to Kerneos and Elmin (and with Kerneos having bought a 54% stake in Elmin in 2012). This left S&B, and consequently Imerys, with just the 300,000 tpa capacity underground bauxite mine and plant operated by Sardabauxiti, in Sardinia (see Imerys seals S&B acquisition: so what does it mean? 6 March 2015).

With the Kerneos buy, should all go well, Imerys will now have access to all the ex-S&B bauxite resources after all. And don’t forget, Imerys still has the ex-MSL bauxite reserves in northern Brazil, and some andalusite claims in Peru for that matter.

Hear from Magnesita and Steuler-KCH on refractory recycling at

Hear about refractories in steel, cement, and DBM/FM supply outlook at