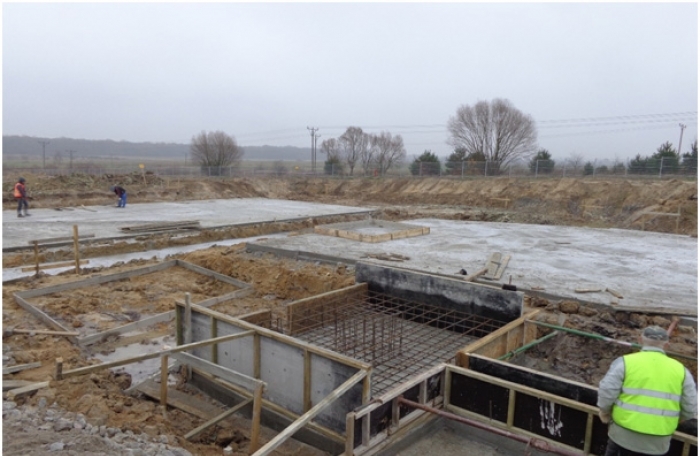 Laying concrete foundations for Baltic Ceramics’ new 60,000 tpa ceramic proppants plant at Lubsko, near Zielona Gora, western Poland, expected on stream by the second half of 2015. Feedstock for the new plant will come from Baltic Ceramics’ own high alumina kaolin close to the plant, as well as possibly using bauxite from Greece, kaolin from the Czech Republic, and fly ash from power stations.

With European shale gas development a question of an uncertain when, rather than if, it would seem prudent for those wishing to enter a looming proppant market to start securing suitable reserves and preparing production facilities and logistics chains.

Unlike frac sand, there is no large scale commercially developed ceramic proppant plant in Europe. However, with plant construction well underway, Baltic Ceramics in Poland appears to be on course to becoming Europe’s first ceramic proppant producer in 2015. Will anyone else join the race?

Although some limited fracking operations are conducted in the North Sea and elsewhere, there has been little demand for proppants in Europe and thus, unlike in the USA, there is not an established proppant manufacturing sector. Most proppants are therefore imported, especially ceramic proppants.

Every shale gas formation is different and requires a specific hydraulic fracturing stimulation treatment, so proppant volume consumption and selection of proppant type can vary widely.

Some 80-90% of the established US proppant market of 34m tonnes (70bn lbs) consumes hydraulic fracturing grades of silica sand (frac sand), with the more expensive, but superior performance ceramic proppants making up the remainder.

Ceramic proppants are mostly manufactured from suitable grades of bauxite and/or kaolin, and both frac sand and ceramic proppants maybe resin coated to enhance fracturing performance.

At this early stage it is not clear how, or even if, Europe might replicate the US proppant market in terms of either proppant volume or proppant type.

Like the USA, Europe certainly has an abundance of silica sand deposits many of which are commercially developed. There is no doubt that right now most of the leading European silica sand producers will be evaluating their reserves and grades for fracturing grades.

Sibelco Europe says it is already investing heavily in developing new infrastructure to support the European shale gas industry. The world leader in silica sand production (and through Unimin Corp. in the USA), Sibelco is producing frac sand from operations in Belgium, France, Russia, and the UK.

With freight and handling amounting to up to 70% of frac sand’s delivered price, budding European frac sand producers will also be taking note of the significance of creating technically and economically sound logistics systems – a recently evolved industry sector in its own right in the USA now – to get the frac sand to the drill pads.

But what of ceramic proppants?

When it comes to sources of ceramic proppants, Europe may be found wanting. In fact, at present there is known to be just one small producing facility, operated by Imerys in Italy.

In 2008, through its subsidiary Treibacher Schleifmittel SpA, Imerys started a 6-10,000 tpa production unit in Domodossola for a rod-shaped proppant called Propynite, based on bauxite, which served North African consumers. Imerys has since made a strong entrance to the US ceramic proppant market with two new large scale plants in Georgia.

Imports of course will play a part in Europe’s proppants market. High quality imports from established US producers such as Carbo Ceramics, Saint Gobain, and Imerys, and from Mineraçáo Curimbaba in Brazil will vie for position with lower priced imports from China, and the latter are already making some connections in Europe for future distribution.

We should expect to see soon, if not already, research and development work in ceramic proppants getting underway from producers of European bauxite and kaolin, and perhaps even specialist manufacturers of high quality, high density alumina balls for grinding and other applications.

There is also likely to be development work in utilising alternative European feedstock raw materials for ceramic proppant manufacture, such as glass waste and fly ash.

Baltic Ceramics on stream in 2015?

One player which is making waves is Baltic Ceramics Investments SA, operating through subsidiary Baltic Ceramics SA. The company was formed in 2011 and made some initial moves to start ceramic proppant production by 2014, but this did not come to fruition.

Baltic Ceramics’ majority owner IndygoTech Minerals SA (49.09%; previously LST Capital SA), has undergone somewhat of a rejuvenation during 2014, and is now aiming to have the ceramic proppant plant in operation at Lubsko, near Zielona Gora, western Poland by the second half of 2015.

Indygotech Minerals is hoping to raise its stake in the company to 52.51% by the end of January 2015.

Initial phase plant capacity is scheduled to be 60,000 tpa, rising to 135,000 tpa when in full production. Feedstock for the new plant will come from Baltic Ceramics’ own 4.8m tonne resource of high alumina kaolin close to the plant, as well as possibly using bauxite from Greece, kaolin from the Czech Republic, and fly ash from power stations.

The company has apparently received $11m from the European Union’s structural funds, a further $4m from the Polish Agency for Enterprise Development, and has issued $3.4m in shares to complete its financing.

The location of the plant would appear to be favourable, within a 400km radius of Poland’s shale gas plays, and generally central to Europe.

The company filed patents for its ceramic proppants in September 2014, and during mid-October 2014 focused on testing grades and securing plant equipment and technology.

In late December 2014, Baltic Ceramics reported that work on the construction of its plant was on track with concrete foundations completed and preparations in place for installation of the steel structure. Further plant equipment deliveries are scheduled during Q1 and Q2 of 2015.

Baltic Ceramics claims to have already received enquiries from shale gas explorers in Poland, Romania, Ukraine and the UK – not surprising since with little activity elsewhere, the Polish producer could be the only game in town.

It would not be surprising if other organisations with access to suitable raw material feedstock resources in Europe, were considering pursuing similar projects to Baltic Ceramics. Watch this space.