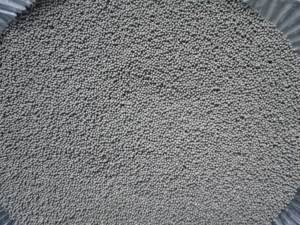 News of the closure was delivered on 24 November in a letter to Van Buren Mayor Bob Freeman from Chris Coker, president of Oxane Materials; a shocked Freeman was reported as saying “The news was completely unexpected”.

It’s a move that comes as some surprise to the proppants industry, not least in that after a long period under wraps Oxane has been pretty active in raising the company’s profile and promoting its products over the last year or so.

Following a decade of low profile research and development, including more than 20 patents, Oxane emerged above the parapet with a paper describing its Advanced Ceramic Proppants and test results at the SPE Annual Technical Conference and Exhibition in New Orleans, September 2013.

Based on initial research at Rice University, Houston, Oxane’s advanced ceramic proppant essentially comprises a sprayed mixed-metal oxide shell over a hollow sphere, imparting a very strong, smooth, and uniform proppant. While few details of raw materials and processing have been revealed, it is understood that fly ash is one of the coating ingredients.

This development was in response to demand from an impressive array of Oxane investors such as ConocoPhillips, Chevron, BP, and Total, which all have deep-water operations in the Gulf of Mexico.

Gulf of Mexico field tests were under discussion, and in May 2014, Coker was quoted in a RigZone article as expecting Oxane to start producing “reservoir quantities” of OxThor™ at the Van Buren plant in June 2014.

Indeed, at that time, Oxane was apparently experiencing “record production” and was on course for a total production volume from Van Buren of 40m lbs ceramic proppants by the end of 2014.

Oxane’s objectives were for two production lines at Van Buren to produce a combined total of up to 100m lbs/year ceramic proppant grades.

So why the closure?

To date the company has given no reason as to its decision to close the Van Buren plant.

Formed in 2002 and headquartered in Houston, it is known that the company was funded by private equity. By October 2013, some US$160m had been invested to date by the likes of Chevron, BP, ConocoPhillips, and Total.

In late 2011 the company said it had plans to possibly employ 350 staff by the end of 2013. This employee expansion did not materialise, although it seems production capacity did increase.

According to some industry sources, there had been speculation over the last 12 months that Oxane was having issues, which included high production costs.

Certainly, with the recent drop in oil prices, combined with OPEC’s maintenance of oil production volume expected to keep oil prices low, there is much concern in the proppants industry over near-medium future demand prospects. Will US shale drillers start to go out of business, thus reducing US proppant demand?

The low oil price environment may well start to squeeze out the smaller and less flexible proppant players, especially those with high production and logistics costs, and those in early stages of development in the market.

Perhaps Oxane’s investors considered to pull the plug before it was too late.

The last few months have seen a change in proppant utilisation by drillers, in that they are using more frac sand compared to ceramic proppant. This has led to forecasts of increased frac sand demand and decreased sales of ceramic proppant.

According to PacWest Consulting, North American proppant consumption is expected to increase at 23% per annum through 2016, from 80bn lbs in 2013 to 153bn lbs in 2016. Most of this growth is to be accounted for by frac sand, with ceramic proppants growing by just 2%.

In essence, drillers have discovered that for relatively softer rock formations, such as in the Eagle Ford and Permian shale plays in south USA, pumping more sand than needed into the wellbores typically results in higher initial flow rates.

This technique of increased proppant loading, or rather, overloading, creates short, wide fractures now preferred over traditional long, thin fractures. The benefit of this method is that a multi-layer of proppants is formed, with the outer layers embedded in the soft rock, permitting conductivity through the inner layers of proppant.

This recent practice, using some 4m lbs proppant per well, has boosted demand for frac sand, and with it being far cheaper and more readily available than ceramic proppants, drilling companies have greatly reduced their ceramic proppant demand. High profile converts to this technique include Rosetta Resources, EOG, Pioneer Natural Resources, ConocoPhillips, and Anadarko.

The other factor which may have influenced the Oxane decision is increased competition in the US ceramic proppants field.

Imerys has been the stand-out US newcomer, bolstered by its acquisition of Pyramax, that has joined the ranks of established ceramic proppant players Carbo Ceramics and Saint-Gobain.

All three companies have recently brought on stream or are bringing on stream significant new capacities in the USA, while Chinese imports of ceramic proppants are still an important factor in the North American market.

The retrofit of an existing Carbo Ceramics plant to produce 250m lbs/year of Kryptosphere LD, is on schedule for completion by the end of Q2 2015.

So, all in all, challenging times for an emerging ceramic proppant producer, and perhaps these have contributed to the situation at Oxane.

Although it is not all doom and gloom, for there is an important place for ceramic proppants in fracturing operations and new market areas are opening up, as one proppant expert wryly commented to me: “The problem for ceramic proppant developers is that they are competing with dirt.”