Being designated a “critical mineral” in the EU and more recently in the USA has certainly assisted fluorspar’s standing as an exploration target.

However, those already in the market have known for some years now that mine closures and production capacity reductions in the West combined with China becoming a net importer, a growing consumer, with its domestic supply sector diminishing, mean that alternative and new sources of supply are needed.

Title Image Expanding fluorspar horizons: a view across the Shine Us mine and plant site of Gobishoo LLC, Dundgobi province, Mongolia; a new 35,000 tpa acidspar processing plant was commissioned in 2020. Courtesy Gobishoo.

With just one week to go until IMFORMED’s Fluorine Forum 2021 ONLINE, Wednesday 20 October, covering the latest trends and developments in fluorine raw material supply and demand, we report on the latest news of emerging potential supply from Mongolia, the USA, Canada, and Greenland.

Gobishoo: a new source from Mongolia

Established in 2005 as a private company by Ch. Ganbaatar, Gobishoo LLC is ramping up to serve Asian and European markets with acidspar and metspar grades.

The company mines and processes at the same location, at the Shine Us mine in Dundgobi province (also spelt Dundgovi = Middle Gobi), in south-central Mongolia about 245km south of Ulaanbaatar.

Underground at Gobishoo’s Shine Us mine, which is currently exploiting a “shelf” of 700,000 tonnes fluorspar Courtesy Gobishoo

Gobishoo, which employs 200 full-time staff on a year-round operation, claims that both the flotation and gravitation processing methods it uses allow for a reduction in water usage below the industry average.

The international freight terminal at Choir, Govisümber province, is 100km west of Gobishoo, which enables access to the Trans-Mongolia Railway. Markets served include customers in Germany, India, China, South Korea, and Russia.

In September 2021, Gobishoo announced that it had entered in an exclusive sales agent agreement with Fluorspar Ltd, based in the UK and managed by Stuart Evans, which is looking to pursue market opportunities across Europe and Asia.

The project is 100% owned and consists of 111 claims over 2,100 acres. It is fully permitted, including mining permits.

Following surface exploration and a drill programme, five areas have been identified “exhibiting loosely quantifiable tonnages and fluorite grades that qualify as Exploration Targets”: Purple Pit, Little Giant Pit (LGP), Dell No. 5, Fluorine Queen No. 3 and No. 4, and Bell Hill. 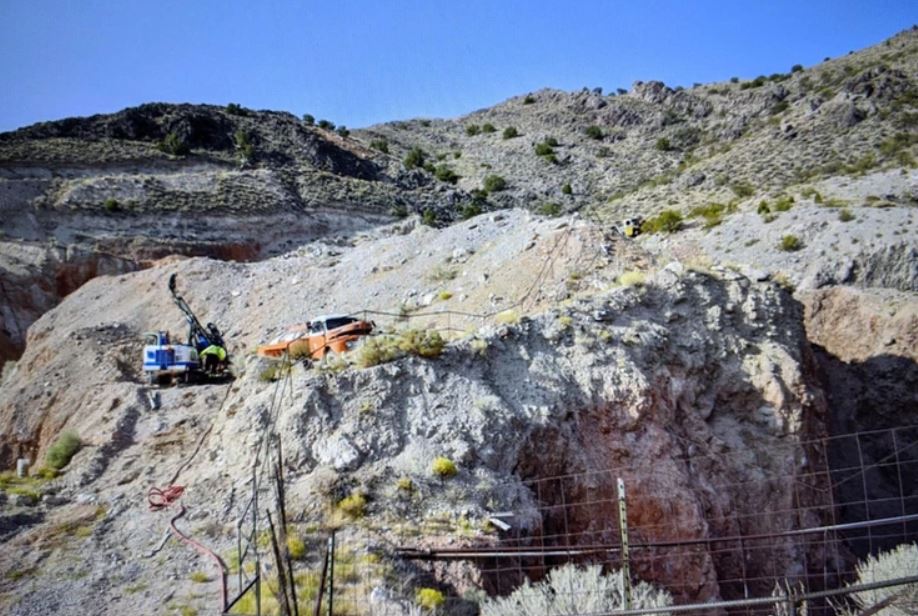 In February 2021, ASM announced discovery of a large unmined zone at the Purple Pit averaging 80% CaF2 confirmed at over 60 metres vertical extent and remains open at depth.

In May, construction work started at the company’s intended plant site in Delta, Utah. The site will host a metallurgical grade lump and briquetting plant to supply the steel industry. The operation will be the only one of its kind in the USA.

The plant site will also include buildings, offices, and bagging facilities. ASM is also readying its rail system to enable it to transport product anywhere in North America.

Alongside the Delta site construction, design and permitting for ASM’s Lynndyl site was expected to get underway, which will host an acidspar flotation facility.

In July, ASM acquired a US$2m fluorspar lump manufacturing facility for its Delta site facilitated by a Profit Sharing Agreement between Ares and The Mujim Group, China.

ASM entered into a strategic partnership with Mujim in March 2020. Mujim is a Shanghai-based fluorspar producer and trader, with production facilities in China, Thailand, and Laos, and claiming 150,000 tpa in sales.

ASM has agreed to pay Mujim US$20/tonne to cover the ongoing technical updates and guidance services relating to the Facility as well as US$10/tonne upon ASM beginning lump production operations and the achievement of agreed upon production targets.

James Walker, CEO, Ares Strategic Mining will be presenting the latest on the Lost Sheep Fluorspar Project at IMFORMED’s

It should be noted that ASM has not yet completed a Feasibility Study nor a Mineral Reserve or Mineral Resource Estimate at the Lost Sheep Mine.

In a recent statement, ASM said: “Based on historical engineering work, geological reports, historical production data and current engineering work completed or in progress by Ares, Ares intends to move forward with the development of this asset.”

ASM has decided to proceed without established Mineral Resources or Mineral Reserves, basing its decision on past production and internal projections.

Late July saw another milestone in Canada Fluorspar Inc.’s (CFI) development of the St. Lawrence fluorspar deposit in Newfoundland when it celebrated the first fluorspar shipment from the new terminal recently completed at Blue Beach in St. Lawrence Harbour.

CFI reactivated the mine in 2017, and it has taken a while to ramp up production with various interruptions.

The arrival of the FWN Paula at St. Lawrence represents the first shipment of fluorspar from the harbour in 31 years. Since 2018, CFI has been loading fluorspar shipments at the Kiewit Cow Head terminal in Marystown. 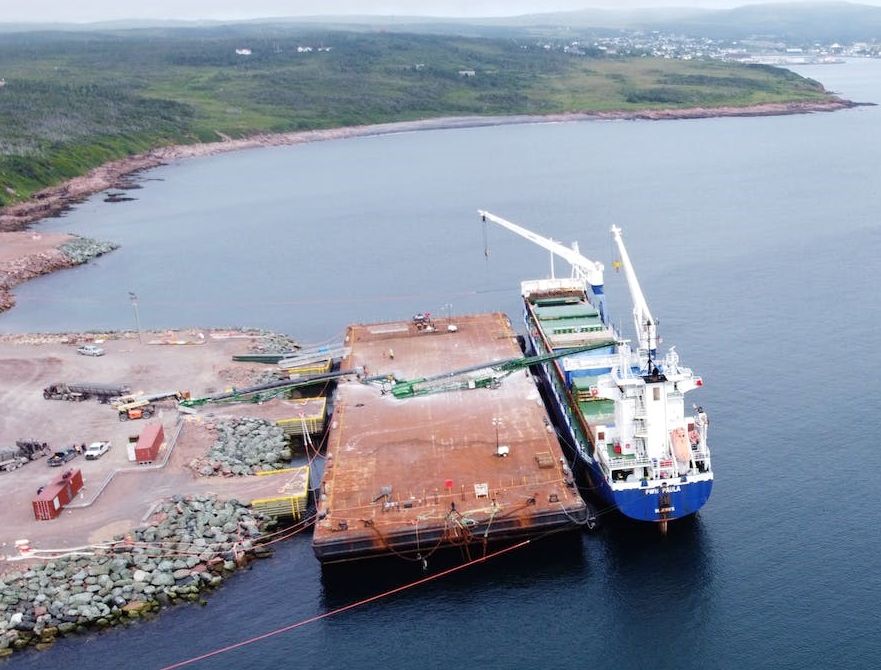 The new Blue Beach marine terminal with its 17 metre draft, permits access to more markets since it can accommodate larger ore carriers than the terminal at Marystown.

Bill Dobbs, President and CEO, CFI told IMFORMED that the “high grade low impurity” label was now being applied to CFI fluorspar, and on the general market situation commented: “We have seen increasing pricing and enquiries as [demand] volumes have picked up, especially from refrigerant-focused North American consumers of fluorspar; while European consumers have lagged, we are getting increasing tonnages as fluoropolymer consumers follow suit.”

CFI has invested just over US$400m in the operation over the past five and a half years, and has a production capacity of around 180,000 tpa acidspar. CFI is wholly owned by private equity firm Golden Gate Capital. 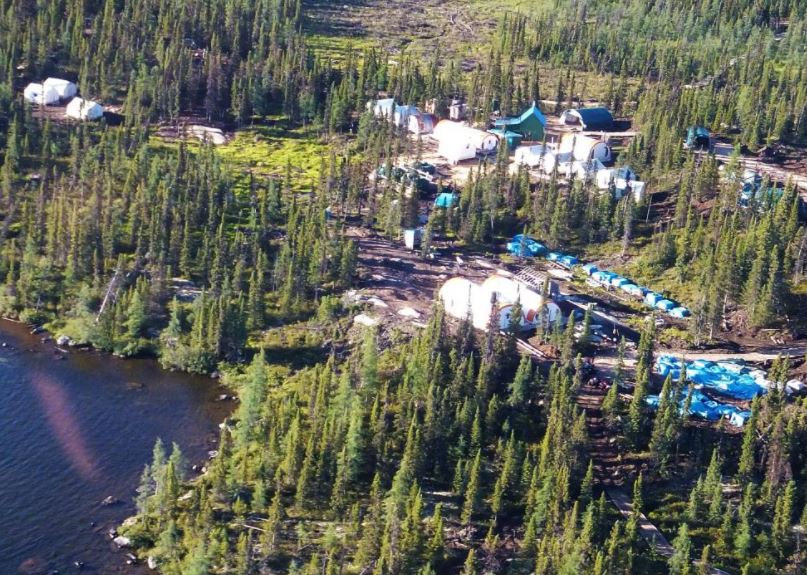 Commerce Resources’ exploration camp at its Ashram Rare Earth and Fluorspar Deposit, in Quebec, Canada; a >97% CaF2 sample was produced and sent to a major user for testing. Courtesy Commerce Resources

In December 2020, Commerce delivered a sample of acidspar produced from the Ashram project to an industry major as per their request.

The 0.5kg sample graded >97% CaF2 and was produced by Hazen Research using the front-end beneficiation approach developed at their facilities in Colorado, USA.

Commerce completed a summer drill programme of 2,814 metres of NQ size coring over 12 drill holes at the Ashram Deposit, targeting further delineation of the mineralised body.

Mineral resources at Ashram are reported as:

If commercial processing of the rare earths comes to fruition at Ashram, then it is likely that the fluorspar component will be a valuable co-product.

Eclipse Metals Ltd, Australia is continuing its examination of historical diamond drill core from the Ivittuut cryolite mine district within its exploration licence located in southwestern Greenland.

The Ivittuut open pit mine was the world’s largest producer of the relatively rare fluorine mineral cryolite (Na3AlF6, sodium hexafluoroaluminate). 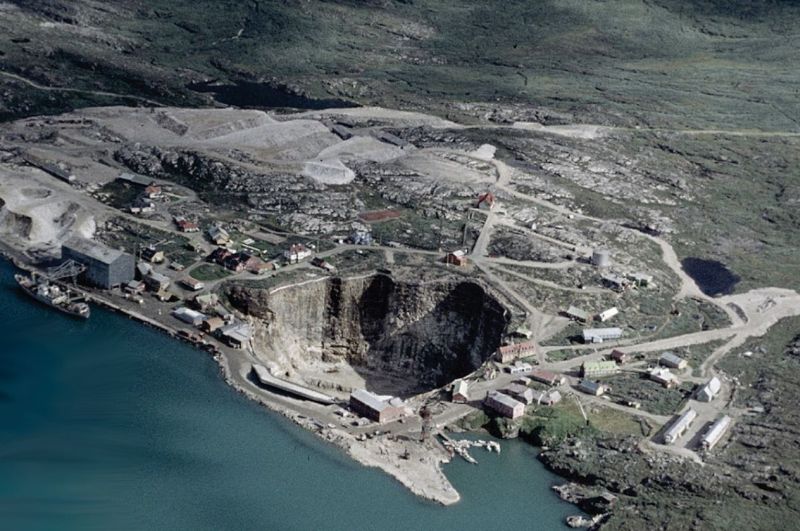 Aerial image of Ivittuut and the cryolite mine in 1960, showing the working open pit, mine infrastructure, ore and waste dumps and ship loading facilities; Eclipse Metals is evaluating the unmined part of the deposit. Courtesy Eclipse Minerals

Mining commenced in 1855 and continued until 1987 through various stages of production. A total of 3.8m tonnes of ore was mined with an average grade of 58% cryolite.

It was historically used as an ore of aluminium and later in processing aluminium from bauxite. Synthetic aluminium fluoride processed from fluorspar via hydrofluoric acid is now used in aluminium smelting.

Eclipse has received an initial batch of samples from historical drill-core from the project and has submitted this to Perth-based laboratories for chemical and petrological evaluation.

This initial assessment of the core provides a greater understanding of quartz, cryolite and siderite mineralisation within the pit environ and a preliminary understanding of the Gronnedal-Ika carbonatite complex located less than 10km from Ivittuut and only 5km from the port of Gronnedal.

A further surface sampling program has been conducted and additional samples are expected to be despatched in November 2021. 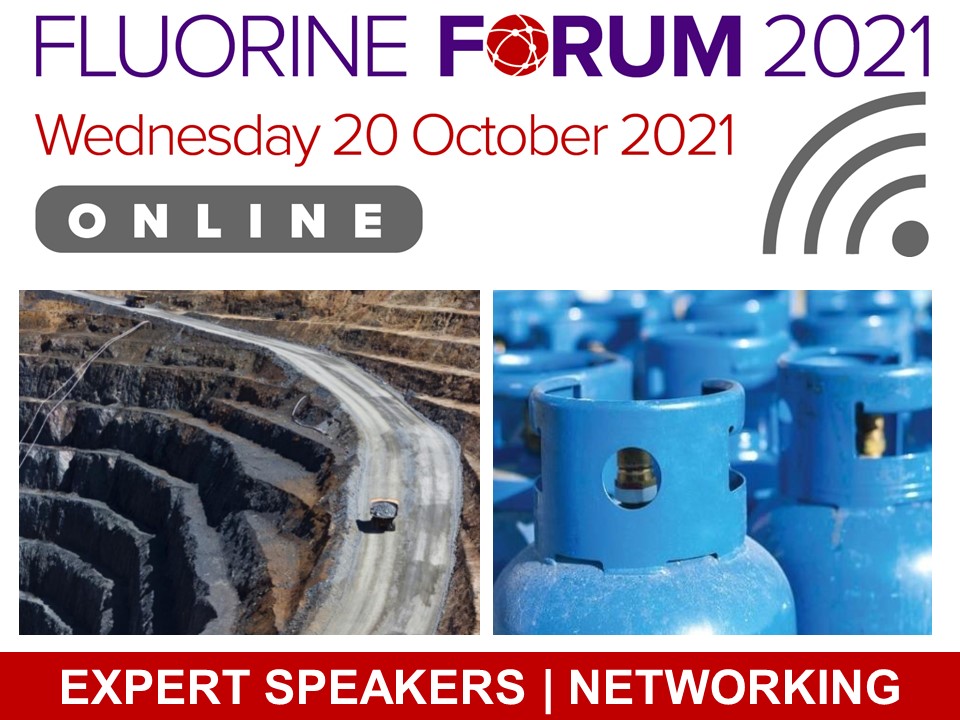