The prospect of China’s magnesite mining sector coming under state ownership accompanied by consolidation of major players into one entity is looking increasingly likely to come to fruition this year.

The Huaziyu magnesite mine, Haicheng, the second largest magnesite mine in Liaoning province. This magnesite source and others like it are soon to be part of one huge part state-owned entity, China Magnesite Mining Co. Ltd, in an effort to modernise and stabilise the Chinese magnesite industry.

According to Adam Zhang of the Northeast Asia Non-metallic Materials Exchange, “This is a major matter for China’s refractory industry, since it is expected to control 80% of the national production”. 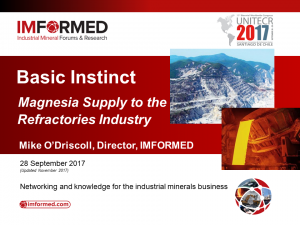 Magnesia Supply to the Refractories Industry”

China Magnesite Mining Co. will be 51% owned by Haicheng Magnesite Factory (owned by SASAC Haicheng). The remaining 49% will belong to other partner companies which appear to still be in the process of pledging their participation.

With a reported total registered capital of RMB2bn, China Magnesite Mining is aimed at accelerating the effective integration of magnesite mineral resources in Haicheng, encouraging green, intensive, efficient and sustainable development, as well as enhancing the magnesite industry’s dominance in domestic and overseas markets.

“In the past, due to dispersion of magnesite mining rights, irregular mining, some environmental problems in magnesia processing enterprises, the price of magnesite and magnesia has been at a relatively low level in recent years.” said Zhang.

It is hoped that if China Magnesite Mining succeeds, it will effectively change China’s traditional magnesite resources supply scene, stabilise magnesia raw materials supply and demand expectations, and promote the development of the entire supply chain of refractories.

Whether this new organisation concludes before or after the 19th National Congress in October is unclear, as are other aspects of the general situation regarding changes in China’s mineral supply sector.

What is clear is that: