Barytes UK mine replacement for M-I SWACO by 2017

Barytes UK mine replacement for M-I SWACO by 2017

Oil price crisis, what crisis? Despite apparent gloom for the outlook of drilling activity and its impact on oilfield mineral demand, M-I SWACO appears to be pressing ahead with plans to open a new barytes mine in the UK.

The proposed Duntanlich mine site, near Aberfeldy, located below the Farragon Ridge. The new 120,000 tpa barytes mine would make the UK self-sufficient, removing the reliance on Moroccan imports. Courtesy M-I SWACO.

M-I SWACO, part of Schlumberger, is to submit a planning application with Perth and Kinross Council in early 2015 to develop a new underground barytes mine at Duntanlich, north of Aberfeldy, scheduled to open in late 2017.

The new mine is to replace M-I SWACO’s existing underground mine at Foss, which has been in operation since 1985 and produces about 42,000 tpa.

However, the Foss barytes deposit is characterised by complex geology making it difficult and expensive to mine.

The proposed mine at Duntanlich, just 10km north-east of Foss, is estimated to host a resource in excess of 7.5m tonnes barytes, and is expected to supply the UK’s entire drilling grade barytes requirements (estimated at 125-130,000 tpa) for more than 50 years at planned production rates.

Production at the new facility is scheduled to be 120,000 tpa, which was scaled back from an originally proposed rate of 200,000 tpa owing to environmental considerations.

A previous planning application by M-I SWACO to develop the Duntanlich resource was rejected in 1996 on the grounds of potential environmental impact. The new proposal is based on three years of environmental studies.

The Duntanlich mine has been carefully designed to be hidden from key viewpoints and has a surface footprint of less than one hectare – less than a quarter of that of the current Foss mine but with an intended three times the average annual output.

Once the new mine is in operation, the Foss mine will be decommissioned and the mine area restored. 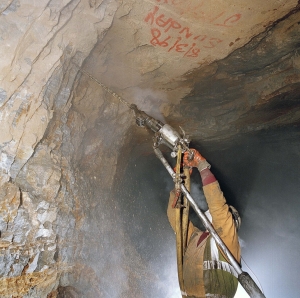 The Foss barytes mine produces 42,000 tpa and is approximately 150 metres below the surface at its deepest vertical point and comprises 6.5 km of tunnels. Courtesy M-I SWACO.

The Duntanlich orebody is understood to be the only known significant barytes deposit in the UK which is economically viable to mine.

According to a report in 2005 by the British Geological Survey (BGS), the Duntanlich deposit has a simple structure with an inferred resource of 13m tonnes, and measured resources of high quality barytes of 7m tonnes.

The deposit’s rank as a world class resource is underlined by the fact that the Duntanlich measured resource is higher than the cumulative estimated 6.7m tonnes of barytes that have been extracted from all UK deposits since records began in 1876.

If it comes to fruition it would ensure the UK is self-sufficient in barytes. About a third of the UK demand for barytes is met by production from Foss, and from imports, which total about 80-85,000 tonnes, mainly sourced from Morocco.

No doubt Moroccan barytes suppliers will be eyeing alternative outlets, most likely the Gulf of Mexico and the Middle East, for a replacement market as their UK consumption disappears.

The move by M-I SWACO comes at a time when policy direction politically is towards self-sufficiency and sustainability in energy and strategic minerals, concerns of which have been raised in the UK.

In its recent report, the UK Minerals Forum commented: “Internationally the UK is facing increasing global competition for raw materials. The UK is not self-sufficient in a number of key sectors, particularly metals and increasingly energy – oil, gas and coal.”

An increase in world demand for drilling grade barytes has placed pressure on traditional sources in Morocco, India, and China, and has sparked a trend in developing alternative new sources of supply, particularly in North and Central America, and Africa.

If the planning application is successful, M-I SWACO anticipates tunnel excavation would start mid-2016, with the mine coming on stream towards the end of 2017.

With relatively high overland freight costs, the proximity of the Foss and Duntanlich barytes deposits to the North Sea oilfield is most fortunate to enable their economic viability.

Most of the existing Foss mine output is processed in Aberdeen and then shipped from Pocra Quay for the North Sea oilfields.

There are also monthly shipments from Perth Harbour south to M-I SWACO’s 50,000 tpa plant in Great Yarmouth, which processes barytes and bentonite for oilfields in the North Sea’s southern oilfield sector.

The key role that logistics play in the mineral to market supply chain cannot be overestimated, particularly when logistics costs can account for up to 80% of the delivered price of the mineral, as in the case of barytes in the UK.

The fundamentals and latest trends in mineral logistics are the primary focus of the IMFORMED Mineral Logistics Forum 2015, 24 April 2015.

Leading experts in mineral logistics, shipping, and port handling of minerals will discuss latest developments alongside invaluable insight presentations from leading mineral producers and mineral consumers as they highlight their respective viewpoints on the mineral supply chain.