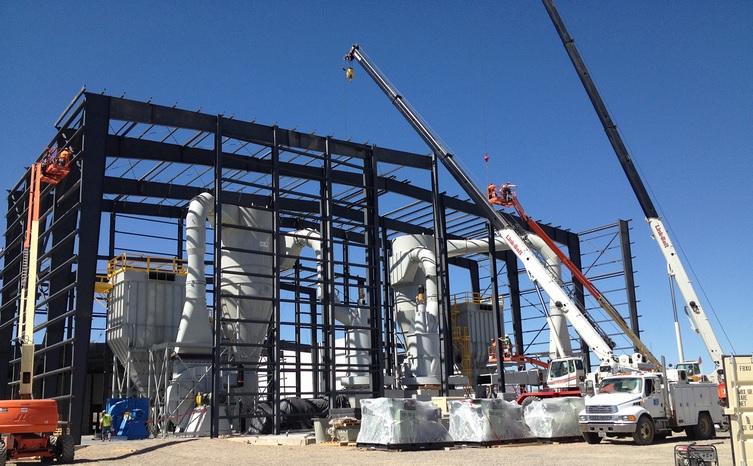 Constructing the new barytes grinding plant, designed by The Mouat Co. Inc., at Halliburton’s Dunphy, Nevada facility, in 2014. The completed processing plant is the largest barytes plant in the world, and which now complements the barytes facilities of Baker Hughes as the two companies plan to merge later this year. Courtesy The Mouat Co. Inc.

Among a number of issues that the proposed transaction raises is the prospect of two of the largest producers and users of barytes becoming one, and how this will have ramifications in the market place.

With Baroid’s latest and large processing capacity upgrade at the Dunphy facility in Nevada completed last year, the combined US barytes processing capacity of the two companies is probably approaching 1.7m tpa, although it remains to be seen how much of the new Dunphy capacity replaces the existing plant capacity.

The merger comes at a time when North America is seeing an increase in barytes processing capacity by established and new players. Although, with the oil price plummeting south of $50/bbl these projects may start to wobble a bit until the price stabilises and strengthens somewhat.

As one drilling fluids engineer commented recently: “These big super groups do package deals that basically give the mud away. Making it very hard for small independents to compete.”

But the shrinking from four to just three major US barytes suppliers could possibly let in new independents from Canada, Mexico, and further afield. There is certainly a fair degree of activity on the side lines away from the majors.

Some 600,000 tonnes of barytes are claimed to be hosted by tailings ponds near Buchans, central Newfoundland, created from a former base metal mining operation.

Timing is all, with recent finds suggesting potentially huge oil and gas offshore fields in the region and anticipation of rising barytes demand for increased drilling programmes in the near future.

With all other North American barytes sources located too distant from this oilfield market, barytes requirements have been met by imports from Morocco. Could this be about to change?

After three years of planning, BMS intends to re-open the plant of the former processing operation and dredge the tailings ponds which reportedly contain 30% barytes, anticipating a 15-year lifetime operation.

Once environmental approval is received from the provincial government, operations are expected to start in the spring of 2015.

BMS is hopeful of progressing with the operation with the knowledge that environmental approval for similar activities at Buchans has been granted twice previously, and that no new infrastructure is required, other than upgrading of certain equipment.

BMS envisages a seasonal dredging operation operating May-October removing 50,000 tonnes of tailings to yield 10,000 tonnes of barytes. The density of the in-situ tailings are roughly 3.20 tonnes/m3.

Upon completion of the start-up work, the operation will commence to produce up to 120 tpd barytes concentrate of flotation product to API specifications. The sulphides production will be roughly 5 tonnes per day.

During seasonal production sufficient barytes product will be stockpiled as filter cake to ensure customer demand can be met until the following May.

On closure of the flotation plant in October of the year, production will continue (drying and grinding as required) using the stockpiled filter cake.

The source of barytes at Buchans is a by-product of base metal mining by ASARCO at Red Indian Lake, Newfoundland. From 1928-1984 ASARCO produced about 16m tons of lead, zinc, copper, silver, and gold.

From 1928 to 1965, the mill tailings from this operation flowed down Buchans River into Red
Indian Lake, and mostly settled on the area known as the Buchans River Delta. In 1965, the first of two tailings ponds was constructed.

By-product barytes was sold to the regional oil and gas drilling industry. But in the mid-1980s exploration drilling offshore was discontinued and demand ceased.

Since then, the reprocessing of barytes from the ASARCO tailings has had a chequered history.

In 1998, United Bolero Development Corp. withdrew from plans to reactivate the plant having identified some 1.5m. tonnes of recoverable material in two tailings ponds with an average grade of 30% barytes.

In 2001, Buchans Barite Co. Ltd was awarded a three year contract to supply a toll grinding
facility in Musquduboit, Nova Scotia on behalf of M-I LLC (now MI-SWACO), however, this also did not come to fruition.

Prior to BMS, the most recent episode of barytes processing at Buchans was by Atlantic Barite Ltd, a subsidiary of Pennecon, which operated from 2006 through to 2009.

Barytes demand for drilling is currently being met by imports of Moroccan barytes. However, increased demand is expected from new drilling programmes as a result of recent finds in the region.

The discovery is one of three in the highly prospective Flemish Pass, which requires deepwater drilling in 1,100 metres of water.

The Buchans barytes source is 530km by highway to St John’s, the centre for offshore oil services and the region’s major port.

News of the proposed Buchans revival comes at a time when the US barytes supply market is witnessing a major hike in overall processing capacity.

This is mainly owing to both favourable market demand and also more acceptance and subsequent consumption of 4.0 and 4.1 SG barytes from domestic and overseas sources.

Baroid is also planning to expand the area of its Rossi barytes mine, feeding Dunphy, from its current 768 acres to 908 acres.

Commissioning of Superior Weighting Product LLC’s new US$18m barytes plant in Corpus Christi was expected to take place during the final quarter 2014. The facility is scheduled to handle a minimum annual volume of 50,000 short tons of barytes and proppants.

Of course, these US barytes processing plants are mostly serving the Gulf of Mexico and continental US markets, since their location prohibits economically feasible supply to offshore north-east Canada.

Elsewhere in Canada, there is smaller scale production of 4.1 SG barytes by Fireside Minerals Inc. from its facility at Watson Lake, Yukon, British Columbia, serving western Canada and Alaska.

In late 2014, Silver Range Resources Ltd was evaluating the possibility of producing 50,000 tpa barytes for the western Canadian drilling market from its Mel Property, located in south-east Yukon.

As for Mexico, and elsewhere in Central America, such as in Guatemala, interest in developing barytes deposits remains high, although sorting the good from the not so good remains a key issue.

As the year unfolds, commencing with a wincingly low oil price, it will be interesting to see who emerges on the barytes front in the face of the Baker Hughes-Halliburton behemoth.