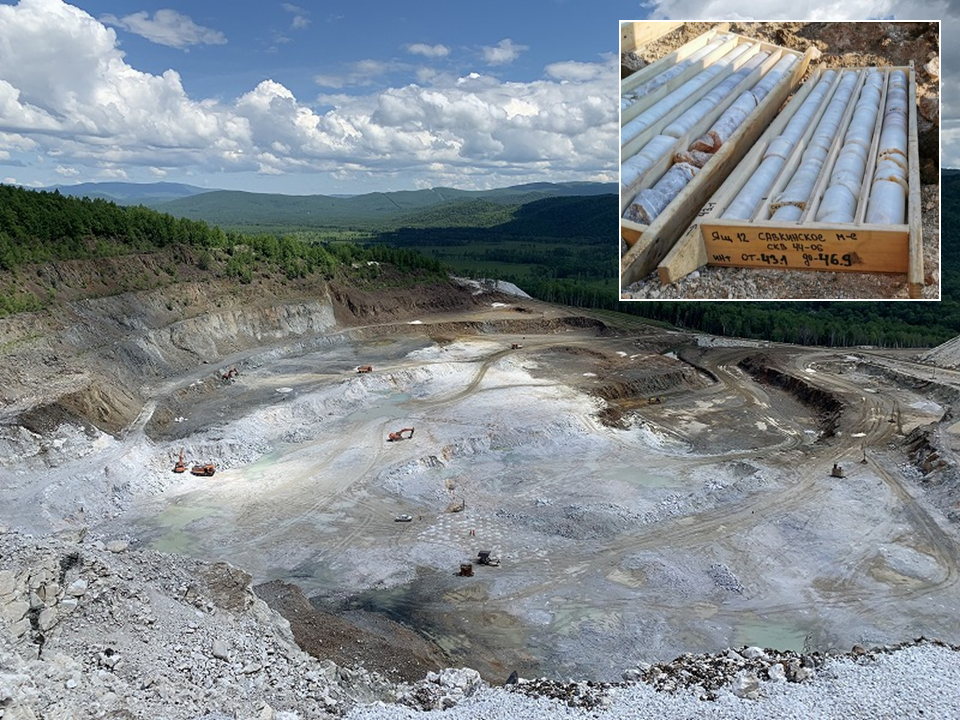 Leading brucite producer, Russian Mining Chemical Co. LLC (RMCC), has completed the first stage of development of what is claimed as the world’s largest deposit of brucite (the natural mineral of magnesium hydroxide), and has joined forces with Quimialmel to process brucite in Spain.

Located in the Jewish Autonomous Region, of the Russian Far East, 110km south-west of Birobidzhan, the 4.03km² Savkinsky deposit hosts preliminary estimated reserves of around 25m tonnes of brucite.

Despite the current uncertainties with regards to the corona pandemic, RMCC is determined to start production in 2025, which will allow RMCC to meet its goal of increasing sales to 500,000 tpa brucite (sales in 2019 were 310,000 tonnes).

The close proximity of the deposit to important markets in Asia will further strengthen RMCC’s position in this part of the world.

RMCC, established in 2002, is already producing about 350,000 tpa from exploiting the Kuldur deposit, in the same region, hosting >8m. tonnes brucite.

The company is headquartered in Moscow, with a 150,000 tpa processing plant at Vyazma, Smolensk, and European marketing and distribution is facilitated by Europiren BV, Rotterdam, founded in 2013, which also has a research laboratory.

Crucially, they provide an alternative source of magnesia (MgO) and magnesium hydroxide (Mg(OH)2) to the more widely developed magnesite and dolomite deposits.

Brucite is used for a wide variety of applications including agriculture, environmentally friendly flame retardants, waste water treatment, flue gas cleaning and in paper and pulp (see below). 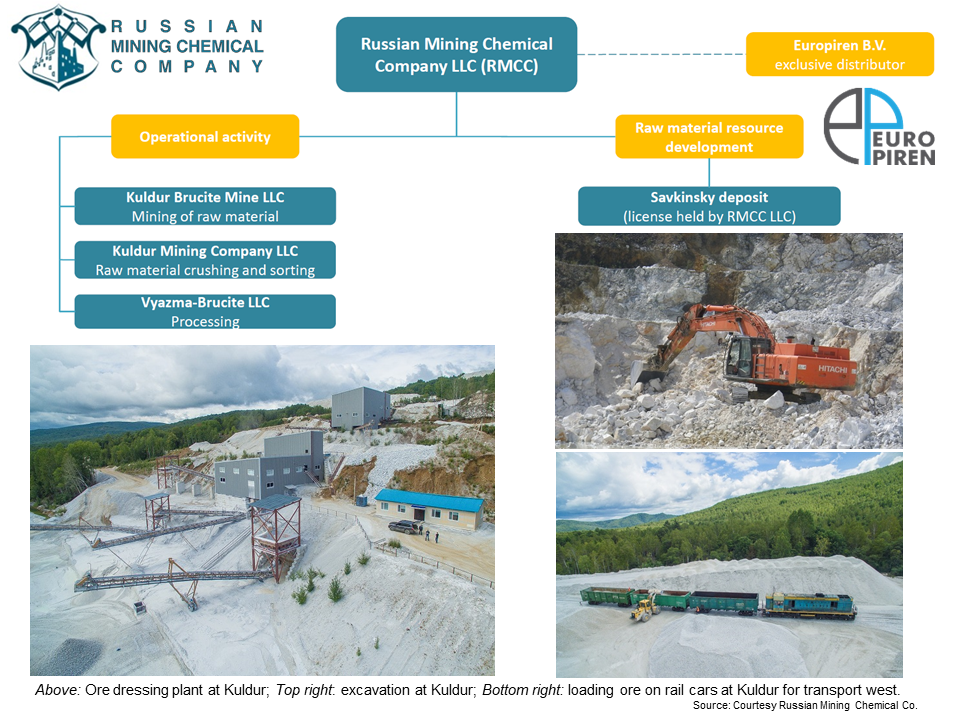 All magnesium mineral supply & demand trends & developments will be covered at

So far, all development and exploration activities at Savkinsky have been carried out within budget and within the time limits of the original plan.

By April 2020, the first part of the infrastructural work, including a newly constructed road of 21km was complete. This enables access for all essential equipment and materials directly to geological exploration sites.

The semi-permanent exploration camp site for employees is under construction (see below), comprising modern all-weather residential tents, a dining room, a bathing complex, as well as a high-speed satellite connection. 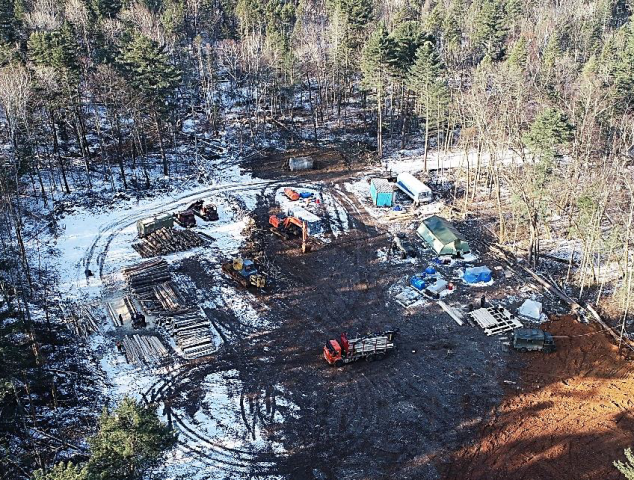 The next stage is to carry out geological exploration entailing an extensive drilling programme to yield 13,000 metres of core to be sampled and analysed at the existing Kuldur mine.

After mining, primary crushing to about 100mm, and XRF sorting at Kuldur, RMCC transports brucite via the Trans Siberian Railway to its Vyazma processing plant and supplies Russian and CIS markets.

Material is further transported to Rotterdam where Europiren stores and distributes a range of grades for different markets throughout Europe. 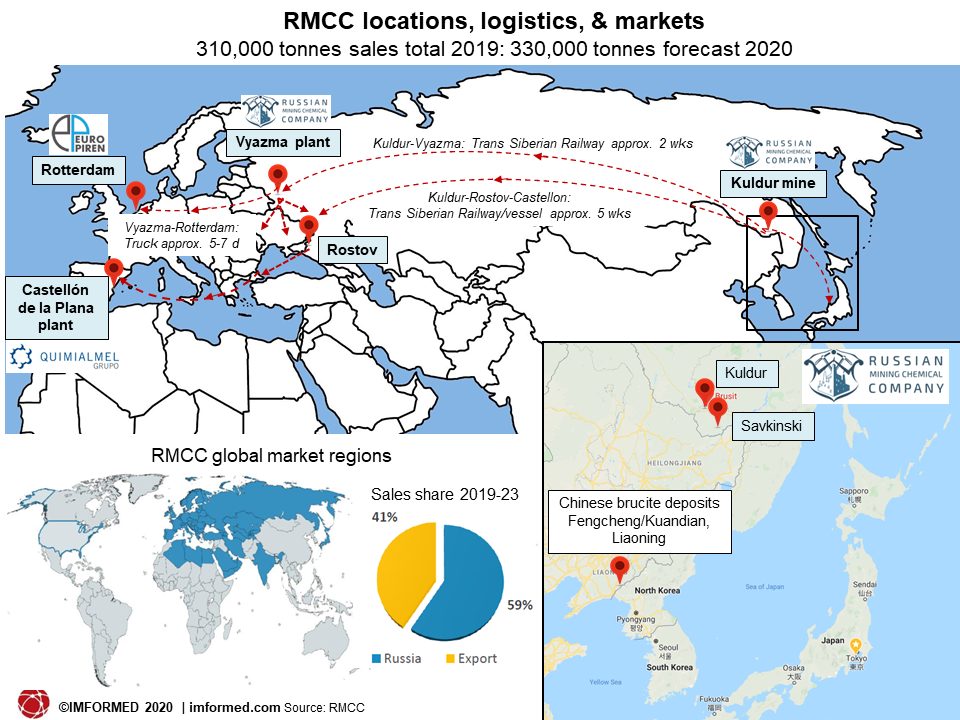 The Vyazma plant started up in 2006, a second unit was opened at the plant in 2011, followed by a third production line in 2019. In January 2020, a fourth line for AgroMag®, a highly active magnesia, was opened at Vyazma.

Initial plans to establish a second processing plant at Terneuzen, the Netherlands, were shelved in 2017 after financing became too challenging, and as a result the third much-needed processing unit was installed in Vyazma.

However, after some six months of extensive trialling, a European processing option was eventually realised in 2019 with leading industrial minerals processor Quimialmel SA, Spain.

On 31 January 2020, RMCC’s first bulk shipment of brucite, railed from Kuldur to Rostov, then via the Black Sea and Mediterranean Sea, arrived at Quimialmel’s plant at Castellón de la Plana, just north of Valencia. 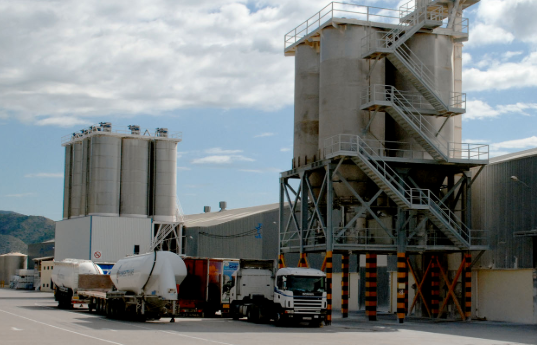 First among the brucite grades to be processed at Quimialmel is RMCC’s Ecopiren®, an ecological flame retardant used in polymer compounds for electric cables, aluminium composite panels and roofing membranes.

Vladimir Nosenko, CEO, RMCC, commented: “The co-operation allows RMCC to satisfy the fast growing demand for Ecopiren® in Spain and its surrounding countries as well as in North Africa and the Middle East. It also means we can improve our service to our valued customers by reducing the lead time and being able to offer bulk deliveries”

The next grade in line for Quimialmel is likely to be MagTreat®, RMCC’s magnesium hydroxide agent for flue gas desulphurisation (FGD).

While FGD has been an ongoing environmental market sector for magnesium hydroxide for many years (competing with caustic soda and lime), a very recent rising star market outlet has been in marine FGD units now required on all commercial vessels. 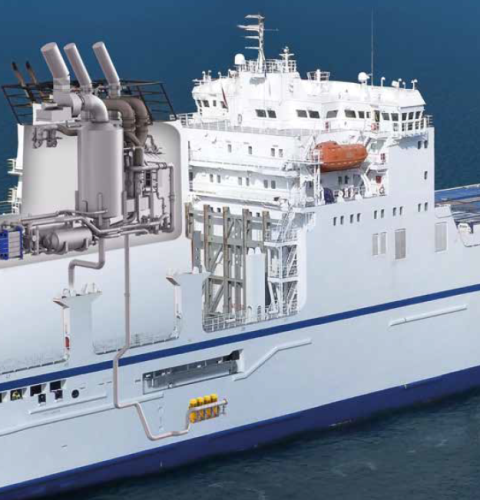 Marine FGD scrubber systems, as pictured above and mandatory since 1 January 2020, are a growth market for magnesium hydroxide.Courtesy Alfa Laval

From 1 January 2020, the International Maritime Organization (IMO) imposed strict global limits on sulphur content on shipping emissions to just 0.5% (down from 3.5%).

Most ships have already switched or will switch to installation of exhaust gas purification, which can employ several types of scrubbing processes. In the wet closed-loop scrubber process, magnesium hydroxide can be applied in suspension.

As with all supply of industrial minerals in slurry form, logistics is key, and RMCC has options on slurry handling facilities in Finland, Germany, Belgium, and Italy.

The natural mineral form of magnesium hydroxide (Mg(OH)2) is brucite, first described in 1824 and named after its discoverer, the American mineralogist Archibald Bruce (1777-1818) from his chemical analysis “of native magnesia from New Jersey”.

Brucite occurs widely in ultramafic rocks, but in its less favourable fibrous form, nemalite, often associated with asbestos. Thus, any economic development is mostly aimed at the other main brucite occurrences in carbonate rocks.

Brucite is formed when dolomitic-marble, or Mg-bearing limestone, is subject to contact metamorphism, periclase (MgO) is formed and hydrates to brucite in the presence of water.

However, very few deposits have been commercially developed. China and Russia are the most active and the leading producers, while smaller scale production occurs in the USA. 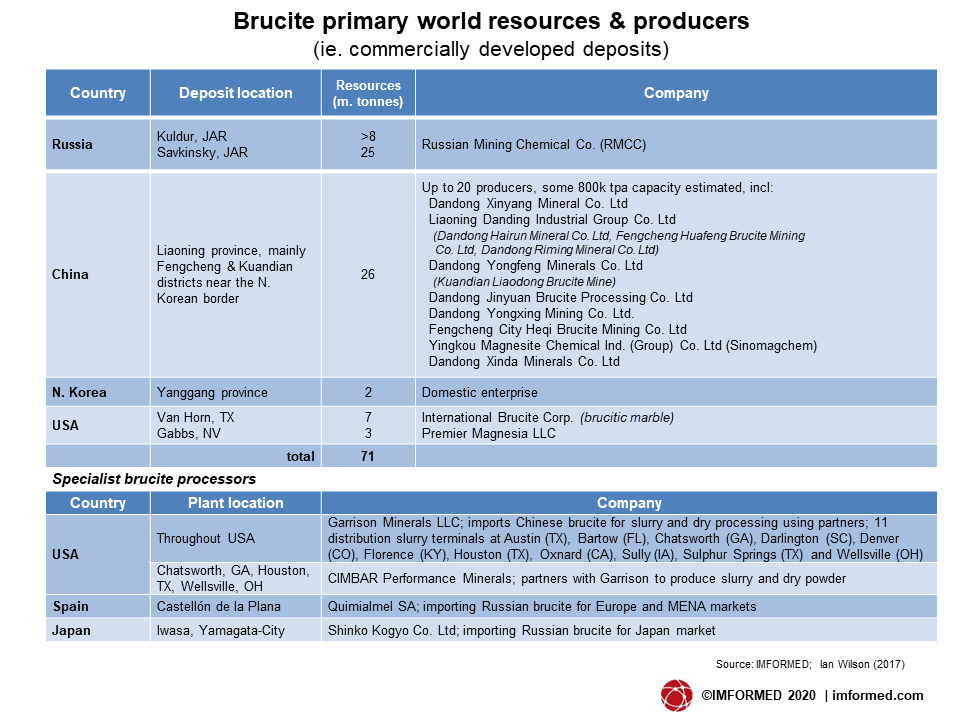 Glass
Viscosity modifier in manufacture of construction and technical glass.

World total consumption of magnesium hydroxide was estimated by Samantha Wietlisbach, Director, Minerals Research and Analysis, IHS Markit, as around 1m. tonnes in 2018 (MgO equivalent; she will be providing an update on this at MagForum 2021, Amsterdam, 28-30 June 2021).

Regarding pricing, as with most industrial minerals, prices can range widely depending mainly on the quality of grade and degree of processing input by the supplier (plus usual influencing factors of volume, logistics, trade duties, buyer-seller relationships, etc.). 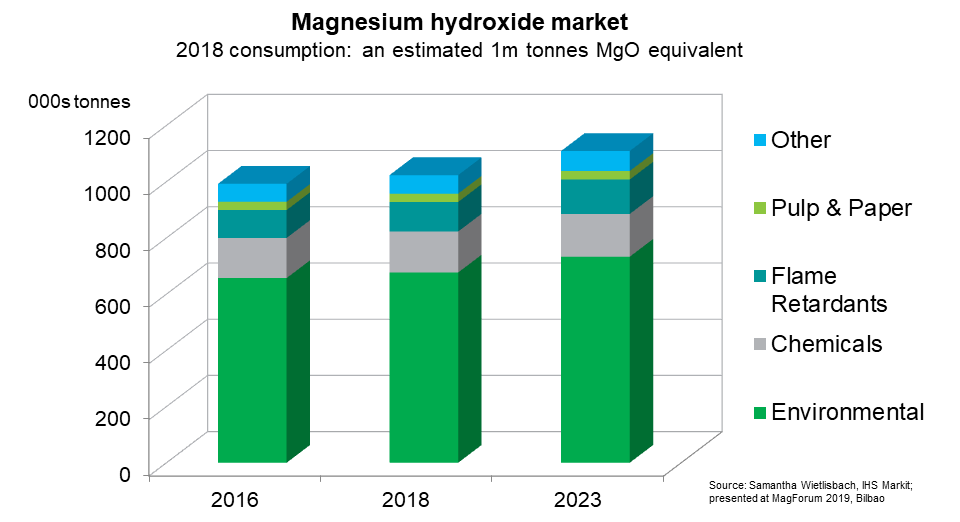