The sharp drop in oil price has clearly impacted the ceramic proppants market with major producers halting expansion plans and in more severe cases closing plants. How long can we expect these doldrums to last?

The first casualty, reported earlier by Newsfile, was the closure of Oxane Materials Inc.’s Van Buren plant in Arkansas on 23 January, announced just before the end of 2014.

Earlier in 2014 Oxane was apparently experiencing “record production” of its fly ash-based ceramic proppant grades, and was on course for a total production volume from Van Buren of 40m lbs ceramic proppants by the end of the year.

But the New Year witnessed a first indication of market concern from one of the proppant majors: Saint-Gobain Proppants announced a temporary suspension of production at its Ft Smith plant, also located in Arkansas, effective from 21 January 2015.

In a report from The City Wire, Jack Larry, general manager of Saint-Gobain’s proppants division, said the plant could reopen if energy prices recover. The company will keep a small contingent of workers at the plant for monitoring and maintenance.

Larry said in a statement. “Fort Smith remains a key part of the future of Saint-Gobain’s proppants business and we anticipate resuming production as soon market conditions allow.”

You can hear first hand from Jack Larry on Saint-Gobain’s views on the proppants market when he presents “The future of ceramic proppants in the unconventional shale market” at IMFORMED’s Oilfield Minerals & Markets Forum Houston 2015, 27-29 May 2015.

The Fort Smith plant opened in 1979 by Norton Proppants, before being acquired by Saint-Gobain. The plant, which consumes bauxite as feedstock raw material, has undergone a series of upgrades and expansions, most recently with a $15m injection in 2010-2011.

Saint-Gobain would not disclose production figures for Ft Smith, but the various reported figures for the upgrade projects over the years point to an estimated 180-260m lbs/y capacity.

Of course, Saint-Gobain has plenty of capacity to hand, with it having opened relatively recently a new $100m, 300m lbs/y proppant plant at Saline, Arkansas in July 2013 – this plant apparently will not be idled. 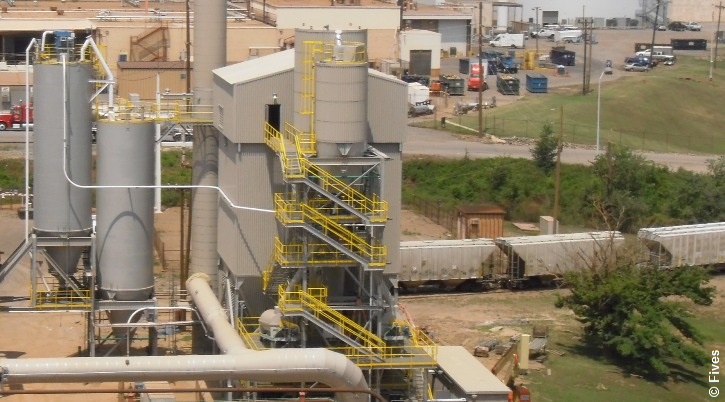 Elsewhere, leading ceramic proppant producer Carbo Ceramics has deferred the completion of its 250,000 lbs/y Millen Line 2 plant until Q3 2015, or even into 2016 perhaps. Millen Line 1 (250,000 lbs/y) came on stream in Q2 2014, and the company has plans to install two further lines. Clearly, these plans are also likely to be on hold until the market recovers.

In Brazil, the Curimbaba Group has also deferred plans for a 70,000 tpa plant expansion to its existing 300,000 tpa ceramic proppant production capacity.

You can hear first hand from Peter Nakachima on Curimbaba’s views on the proppants market when he presents “Brazilian proppants: Curimbaba past, present, & future” at IMFORMED’s Oilfield Minerals & Markets Forum Houston 2015, 27-29 May 2015.

Questions must now be asked about how emerging producers and developers in the ceramic proppants sector will fare under the current oil price climate.

These include the likes of wannabes Baltic Ceramics SA, Poland, Ecopropp Pty Ltd, Australia, and Hallmark Minerals, India. To be honest, if these projects carry on, by the time they come to fruition it is likely that market conditions will have improved – this market does have cycles, and these players have been through it before.

Sure, the proppant industry will be taking a hit now, but come the end of 2015 and into 2016 it might be a different story. Shale gas development activity in North Africa, the Middle East, and South America is continuing and ceramic proppants will be in demand.

The European market situation remains uncertain on timing, as reported earlier in Newsfile, and Chevron’s recent withdrawal from Poland may have cooled expectations for now.

Carbo Ceramics CEO Gary Kolstad in presenting the company’s Q4  2014 results 29 January, acknowledged that the decline in rig activity and a shift in E&P fracture treatment practice to using more frac sand at the expense of ceramic proppant demand will make an impact. Carbo expects to see continued pricing pressure for ceramic proppants.

Although the company anticipates capital expenditures in 2015 to be halved or more, compared to 2014, retrofitting of a plant to produce its Kryptosphere proppant remains on course. This grade, much championed by Carbo Ceramics, represents a new upper tier category of ultra-high strength ceramic proppants – both Saint-Gobain, and more recently CoorsTek have also come on to the market with similar grades.

Learn all about it! IMFORMED presents at SME Denver

All these developments and trends in ceramic proppants, and in particular, a look at the raw material feedstock used in their manufacture will be discussed in my presentation:

Moreover, anyone interested in hearing what the big guns have to say about the future of the proppants industry should take note of the following confirmed speakers for IMFORMED’s Oilfield Minerals & Markets Forum Houston 2015, 27-29 May 2015: