First it was Oxane Materials, then Saint-Gobain, followed by Imerys, and now the mighty Carbo Ceramics. All of the US major ceramic proppant producers have now been forced to idle capacity in the face of falling demand before Q1 2015 is out, representing about a 23% drop in total US capacity.

While the ceramic proppant majors have plenty of capacity to play with, and can always switch on idled plants, the story for Oxane Materials is more serious, since it seems the company has ceased ceramic proppant manufacturing altogether and is possibly facing legal action from local authorities. 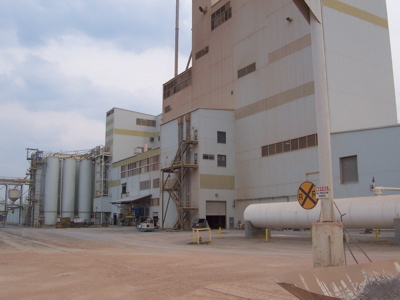 According to local press reports, the Arkansas Economic Development Commission filed a lawsuit on 15 February 2015 claiming that Oxane had defaulted on an earlier agreement promising local employment in return for grant funding for infrastructure development.

Oxane Materials, having been in development for some years, had only recently joined the ceramic proppant supply sector and, unlike the US majors, was using fly ash as raw material.

Carbo Ceramics announced on 10 March 2015 that it had decided to mothball its 275m lbs/y proppant manufacturing facility in McIntyre, Georgia.

In a company statement, Gary Kolstad, Chief Executive Officer said: “Carbo began slowing production earlier this year to assist in managing cash and inventory levels. The Company’s actions were in direct response to a depressed commodity price for oil and the resulting negative impact on industry activity levels, which is having a negative impact on demand for ceramic proppant.”

“Unfortunately, we have not seen improvement in demand for ceramic proppant, nor do we anticipate any change in the near term. With this outlook in mind, we have decided to mothball our facility in McIntyre, Georgia until such time as market conditions warrant bringing it back online.”

Kolstad also warned that in managing its other active proppant facilities, this would also include slowing down and idling production “as deemed necessary”.

Barely 11 days earlier, Carbo Ceramics had stated in its 10-K Annual Report : “Given current business conditions, the Company expects to idle its plant in China during the first quarter of 2015”. This is the 100m lbs/y plant located at Luoyang, Henan, China.

The two plants to be idled each produce Carbo Ceramics’ range of low density proppants: CARBOLITE®, CARBO ECONOPROP®, and CARBO HYDROPROP®, which are used in hydraulic fracturing treatments in medium depth oil and gas wells.

ECONOPROP® was introduced to provide a lower cost ceramic to compete more directly with frac sand and resin-coated frac sand. However, during 2014 Carbo Ceramics and other US ceramic proppant producers saw frac sand steal a significant share of the market as exploration and production (E&P) companies switched to using greater volumes of frac sand in order to overload their wells with the lower cost proppant to stimulate greater conductivity. Thus it is the low density proppants that are taking the brunt of the fall in drilling activity at present.

The McIntyre plant (as well as the two other Georgia plants of Toomsboro and Millen) is supplied by external kaolin miners, of which at least 80% of McIntyre’s requirement is supplied by Arcilla Mining & Land Co., which is the main third party used for kaolin extraction for US proppant manufacturers in Georgia, Alabama, and Arkansas .

Overall, Carbo Ceramics estimates that its mineral rights in the states of Alabama and Georgia contain approximately 19.1m short tons of kaolin suitable for kaolin-based proppants. 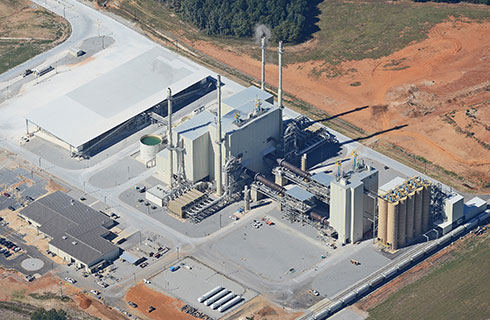 Imerys’ new 500m lbs/y ceramic proppant plant at Wrens, GA, which only came on stream in 2014, is to have reduced production while demand is down. Courtesy Alberici

Ramping up US capacity

As the “shale gale” took hold in North America during the mid-2000s, domestic ceramic proppant producers found they needed to up their respective production capacities rapidly, particularly with increasing competition from lower cost (and mostly lower quality) imports from mainly China, but also Russia.

Between 2006 and 2011, Carbo Ceramics, in successive phases, completed construction of four ceramic proppant production lines at its manufacturing facility in Toomsboro, Georgia, which is its largest facility at 1,000m lbs/y capacity.

During 2014, the company brought on stream the first 250m lb/y ceramic proppant production line in Millen, Georgia. Construction also commenced on a second 250m lbs/y line at Millen, however, owing to prevailing market conditions, Carbo announced 29 January 2015 that this project had been temporarily suspended – perhaps until end-2015 or even 2016.

Elsewhere, during the same period, US rival Saint-Gobain followed suit with expansions while newcomer Imerys started a new proppant plant on its existing Andersonville, Georgia site before snapping up emerging player PyraMax Ceramics LLC with its new 500m lbs/y plant at Wrens, Georgia.

You can hear first hand from Jack Larry, General Manager, on Saint-Gobain’s views on the proppants market when he presents “The future of ceramic proppants in the unconventional shale market” at IMFORMED’s Oilfield Minerals & Markets Forum Houston 2015, 27-29 May 2015.

In 2014, Carbo Ceramics saw its proppant sales drop by nearly 6% from 2013 to 1,618m lbs. During that year, its Russian operations were impacted by the imposition of trade sanctions enacted by the US government in response to the ongoing conflict in Ukraine.

But in the USA, Chinese imports remained a factor, while recent E&P practices in consuming larger volumes of frac sand at the expense of ceramic proppants compounded the fall in ceramic proppant demand.

Come 2015 and the oil price drop, E&P budget cuts have been significant, drilling activity has declined, and with it proppant demand has been impacted further.

With leading oilfield service suppliers Halliburton Energy Services Inc. and Schlumberger Ltd together accounting for around 52% of Carbo Ceramics’ 2014 revenue, the US performance outlook for both these companies is expected to be flat at best for 2015 and therefore Carbo Ceramics, and other proppant producers, may not expect an uptick in demand any time soon, at least until 2016.

Thus US producers have found themselves with excess capacity. The result is that Oxane Materials announced its 23 January 2015 Van Buren, Arkansas plant closure in November 2014; Saint-Gobain idled Fort Smith, Arkansas on 21 January 2015; on 25 February 2015 Imerys idled its Gemini plant at Andersonville, Georgia, and announced a reduction in production at the brand new Wrens, Georgia, plant; and on 10 March Carbo Ceramics mothballed its McIntyre plant. 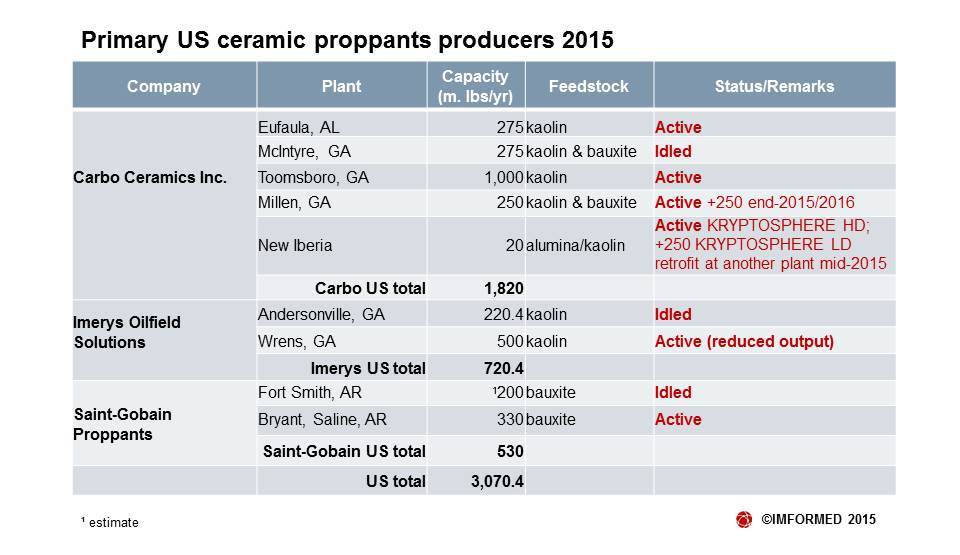 With theses recent closures, and not including the possible slowdown at Imerys’ Wrens plant, the upshot is an overall reduction in US ceramic proppant capacity of about 717m lbs/y, or about 23%. 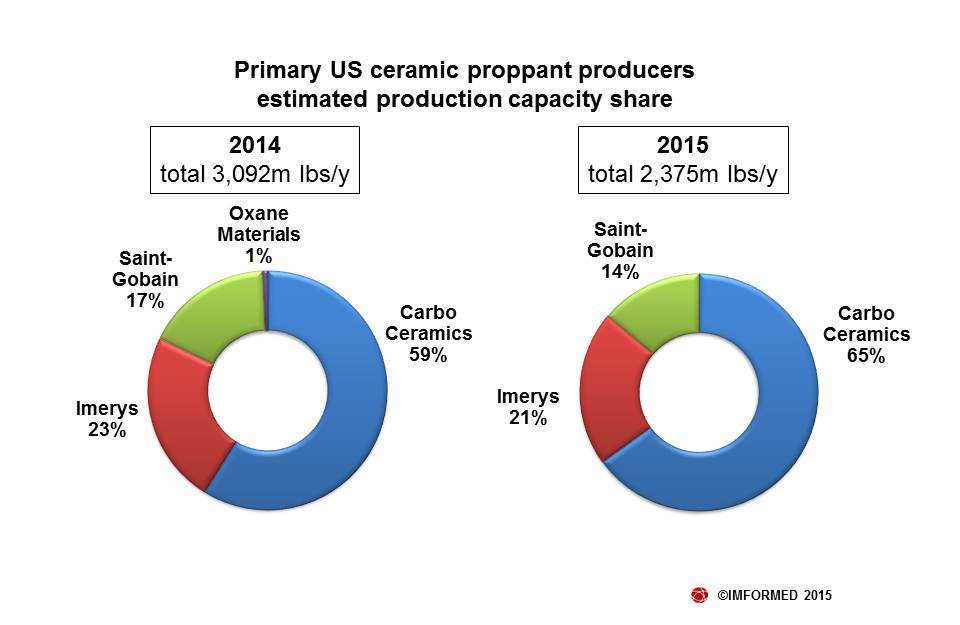 This is almost in line with the earlier forecasts of 2015 US ceramic proppant demand by PacWest Consulting Partners (now part of IHS Inc.) in December 2014. Overall US proppant consumption was projected to rise 2% p.a. through 2016, from 80bn lbs in 2013 to 111bn lbs in 2016, with most growth in frac sand, but ceramic proppants declining by 17% and resin coated sands by 5%.

Carbo Ceramics expects these conditions to continue during 2015 with continued pricing pressure on ceramic proppant, and admits that “the duration and associated impact of a lower commodity price environment is difficult to determine. Managing through this environment will continue to be challenging.”

Although Carbo Ceramics anticipates that its capital expenditures in 2015 will be reduced to less than half of 2014 capital expenditures, it is nevertheless still proceeding with a retrofit of one of its plants with the new KRYPTOSPHERE proppant technology, aiming at a 250m lbs/y output of KRYPTOSHERE LD. During Q4 2014, KRYPTOSPHERE HD was successfully pumped in its first deep-water Gulf of Mexico well.

Ultra-high strength ceramic proppant is a new upper tier grade category recently added to the “proppant pyramid”. These are based on high alumina raw materials for application in ultra-deep wells, eg. 9,144 metres (30,000ft) in the Lower Tertiary, Gulf of Mexico.

How fares the development and market utilisation of ultra-high strength grades introduced by Carbo Ceramics, Saint-Gobain (Titan), and more recently CoorsTek Inc. (CeraProp), remains to be seen. The plan at Carbo Ceramics is that should demand take off for KRYPTOSPHERE then a retrofit programme will be rolled out to other plants.

Yes, continuing low oil prices and declining drill rig activity naturally place a dampener on immediate market prospects for proppants, but I shall conclude with some potential glimmers of light to keep a watch on: