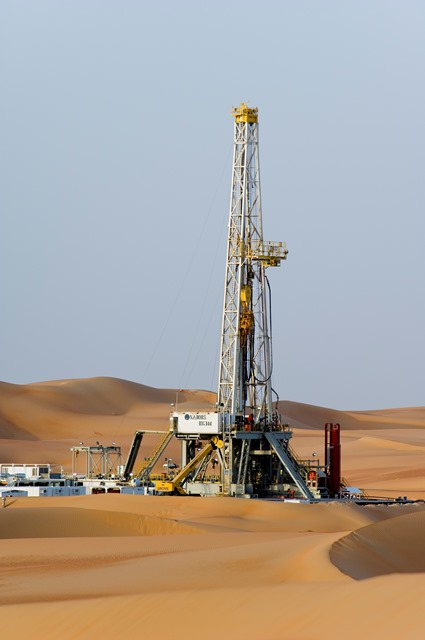 Regarding industrial mineral consumption in oilfield applications, such as in drilling muds and as proppants in hydraulic fracturing, the Middle East region has fared somewhat better than other parts of the world.

On evidence from the excellent presentations given in Dubai last month this trend seems set to continue.

From most accounts, it was felt that a corner had been turned in the depressed market and that 2017 was already looking brighter. 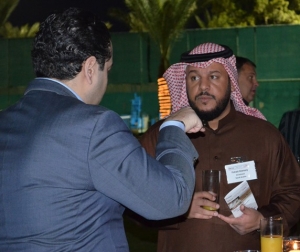 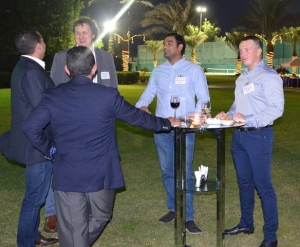 Providing the conference with an excellent scene-setter was Mark Watts, Oil & Gas Editor, of Middle East Economic Digest with his “Review and outlook for the Middle East oil and gas sector”. Watts covered reserves, production, prices, E&P spending, and projects for the region.

“The market is showing signs of recovery since late 2016 when OPEC and non-OPEC producers agreed to cut production to support prices. However, few analysts are forecasting a return towards $100 a barrel in the coming years.” said Watts.

Saudi Arabia, followed by Iraq and the UAE, has been by far the largest market for projects since 2011 with nearly $70bn worth of contracts awards, and bucked the trend by actually increasing its project expenditure in 2016 over 2015. 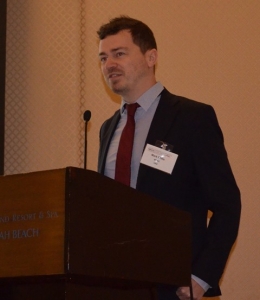 “Few analysts are forecasting a return towards $100 a barrel in the coming years” Mark Watts, Oil & Gas Editor, MEED

“Gas is expected to be a fast-growing sector with the emergence of sour gas, tight gas and shale gas over the last ten years” Watts added.

Achampong questioned whether companies in the oilfield sector were investing enough in procurement and supply, and urged a focus on supply chain visibility, optimisation, and supplier relationship management.

Oilfield mineral consumers must adapt their procurement strategies to the changes taking place in the market.

With a market size valued at US$1.45bn in 2015-16 and estimated to reach US$2.19bn by 2022, Seedat assured that the Middle East is and will continue to be a major market for oilfield minerals used in drilling fluids, stimulation and cementing applications.

“If the drilling fluid market in the Middle East does indeed reach the estimate of US$2.19 billion, then by the same token, consumption of barite is likely to increase by some 50% to over 2.40 million tonnes” said Seedat.

However, he warned that this was a most optimistic (but not unrealistic) prediction, since barite consumption is very difficult to estimate owing to the variations in application and density requirements of fluids used. 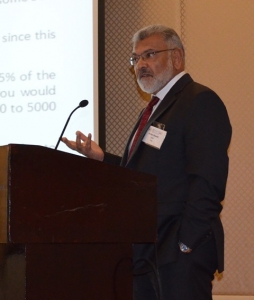 “Some insist on using the 4.20 grade [barite], but most now also accept 4.15, Indian in particular, and 4.10 grades” Abdul Seedat, Commercial Director, IDEC

For example, in Kuwait fluid densities of up to 19ppg are used where barite can amount to 40-45% of the fluid, which could equate to 950-1,600 tonnes barite per interval/well. But in other applications, it may not exceed 5%.

Other key factors regarding barite use in the Middle East include stricter environmental regulations (especially on heavy metals) and the price difference between SG 4.2 and lower SG grades is not as critical as the material’s availability.

Seedat commented: “Barite with SG 4.20 was the only grade used in the Middle East until recently, where due to the tightness of supply, operators started to accept lower grades. Some insist on using the 4.20 grade, but most now also accept 4.15, Indian in particular, and 4.10 grades.”

While barite will remain the main weighting agent of choice, calcium carbonate is taking a small slice of the market by replacing barite in many reservoir drilling applications, especially at lower densities, owing to its solubility in acids. 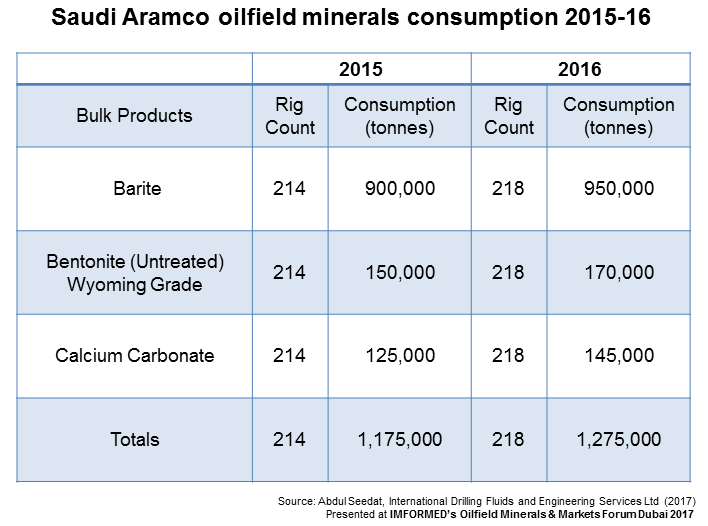 Seedat concluded with some interesting pointers on Saudi Aramco, the region’s largest oilfield minerals consumer, and its strategies.

The outlook is positive for drilling minerals, with Aramco’s December 2016 rig count at 218 active with an anticipated growth of 4-6% for 2017.

However, what might have an impact on supplier selection is Aramco’s current supplier focus on Local Content (IKTVA – in-Kingdom Total Value Add Programme), Availability, Pricing Discounts and Performance with products on the ground.

“Best pricing and proof of material readiness will create some preference from buyers. Local content and local manufacturing is a must going forward to enter the market.” said Seedat.

One of the growth sectors in the region, which has ramifications for frac sand and ceramic proppants, is expected to be unconventional gas exploitation.

Demand for gas is outpacing oil by a factor of 3x, and LNG demand growth is 2x as fast as gas consumption in total. Overall gas demand is expected to grow by 50%+ by 2030, from the current 320 Bcf/day, according to Mills.

The key shale gas plays are mainly hosted by Saudi Arabia, Algeria, and the UAE, although Egypt, Libya, and Oman also have shale gas deposits.

It is early days, but Mills concluded: “Resources are abundant but prices and commercial terms are not right…yet. Policies have to tackle all four quadrants of the challenge: supply, demand, tradition, and innovation”. 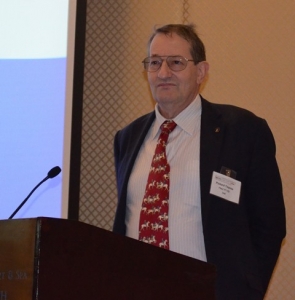 “On bauxite, while local sources are used for aluminium, no suitable material for proppant production has been found” Pickard Trepess, Managing Director, FRAC PT FZE

In Saudi Arabia, where fracking is ongoing, Trepess highlighted the significant requirement for electricity generation and industrial feed, as well as the opportunity for a new resin coating plant in the country.

Regarding suitable mineral sources for proppant manufacture, Trepess concluded: “A lot of local sand is contaminated with carbonate (seashells etc.) and clay, however, suitable silica sand exists in Saudi Arabia”.

On bauxite, while local sources are used for aluminium, no suitable material for proppant production has been found. Importing material is an expensive option, and India is a potential source.

Ceramic proppant demand is 615,000 tonnes, expected to grow to just over 1m tonnes in 2021. Notable markets include Saudi Arabia and Oman which are each expected to see 12% growth.

Proppant grade, non-metallurgical bauxite resources are confined to Kutch, Jamnagar in Gujarat while large bauxite-kaolin blends and additive resources are near the coastal ports of Saurashtra and Kutch areas of Gujarat.

Bhatt commented that Indian calcined bauxite-kaolin producers were attracted to switch from abrasive and refractory markets to the proppant sector owing to a higher profit margin of export.

“Shale gas exploration programmes of the Middle East will give a boost to establish new projects in India.” said Bhatt. 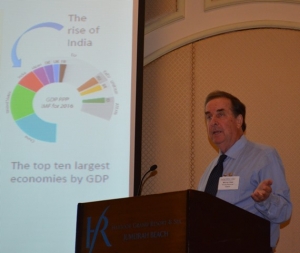 Lines underlined that the Middle East is showing a good deal of interest in fracking technology as there is significant potential for producing unconventional gas in Saudi Arabia, Oman, Jordan, Algeria and Tunisia.

Barite from India, Iran, and Morocco 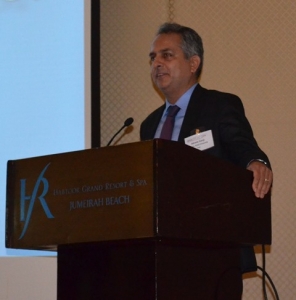 “Production capacity of Iranian barite is estimated at over 850,000 tpa, although actual production was 471,316 tonnes in 2014″ Dr Alireza Ganji, Industrial Minerals Specialist

Production capacity of Iranian barite is estimated at over 850,000 tpa, although actual production was 471,316 tonnes in 2014, with Poudrsazan Industrial & Mining Group and Iran Barite Group accounting for about 45% of total production.

Only about 25% of production is exported. “The increasing trend of rig activity assures that the oil and gas well drilling market will remain an appreciable consumer of barite in Iran.” said Ganji.

Broychim accounts for nearly 50% of Morocco’s barite exports and in 2017 the company will open a new 20,000 tpm barite plant at the port of Safi, hosting two grinding units, crushing, washing, and jigging units.

Typical challenges at present include API Section 10 bentonite (equivalent to US Wyoming bentonite) availability issues in Indian mines and the unwillingness of oil and gas contractors to use API Section 9 and 11 bentonite in deep wells.

“The demand for bentonite in the Middle-East and Indian market is forecast to increase drastically by 2020.” concluded Khandelwal.

“Development and supply of clay grades for drilling fluids” by Francisco Beneyto, Product Manager Industrial Bentonites, Tolsa SA emphasised the need for mine management, good quality, and analysis of suitable clay grades for oilfield application. Bentonite, attapulgite, and Sepiolite were all considered. 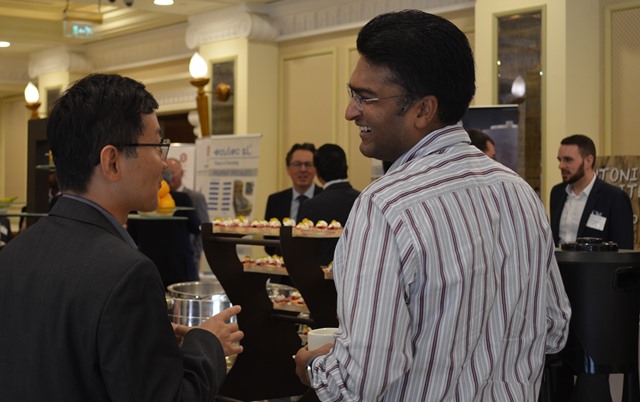 See you in Houston!

As ever we are indebted to the support and participation of all of our sponsors, speakers, and delegates for making Oilfield Minerals & Markets Forum Dubai 2017 such a success.

Initial feedback from the conference already suggests a follow-up Middle East event should be planned for 2018 and we are working on that now: we very much appreciate all the completed feedback forms and please continue to provide us with your thoughts and suggestions.

We shall keep you abreast with developments and hope to meet you again at our upcoming Oilfield Minerals & Markets Forum Houston 2017, 21-23 May 2017, the Houstonian Hotel.