Just about anyone who’s anyone in the metal casting world was headed to Germany at the start of last week for the industry’s premier show in Düsseldorf: the quartet of GIFA-METEC-THERMPROCESS-NEWCAST.

In contrast to the following wider-interest and extensive trade exhibition, Foundry Minerals & Markets Forum 2015 was a seminar specifically focused on supply and demand trends for industrial minerals used in metal casting.

The Forum hosted a panel of highly qualified foundry mineral experts which provided a rounded and in-depth review of the status of supply and demand for a range of key minerals used in various applications in metal casting.

Here are just some of the highlights and main takeaways:

Jessica Roberts, Senior Analyst, Roskill Information Services Ltd, set the scene perfectly with “Foundry minerals: an overview of supply & demand”: a broad-picture review of the casting market followed with a focus on the key foundry minerals of zircon, chromite, bentonite, and graphite.

Of particular note was Roberts’ attention to the advent of 3D printing and its impact on the foundry industry and its consumption of minerals, perhaps initiating, in her words “a structural change”. 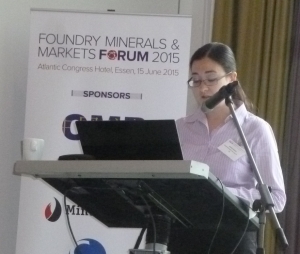 Jess Roberts, Roskill, discussed a “structural change” in the market with the impact of 3D printing.

In summing up, Roberts considered that perhaps it would be a case of foundry minerals working in partnership with 3D printing: as evidenced by the demonstrated example of materials used in Voxeljet printers including PMMA (polymethyl methacrylate) for investment casting, and silica sand used in coreprinting.

Frulli concluded that the foundry market expected the following from a foundry mineral supplier: quality, reliability, expertise and know-how, and innovation.

In “Foundry’s position in the changing graphite landscape”, Simon Moores, Managing Director, Benchmark Mineral Intelligence (inset top right in title picture), provided an overview of the natural graphite market, explaining how and why graphite is used, and reminding that foundries were the second largest market for flake graphite.

Graphite production is about 650,000 tpa, and industrial uses including the foundry market along with refractories and lubricants accounted for 74% of graphite demand.

Moores noted concern over future availability from China as the dominant supplier of graphite (60% flake; 85% of total graphite), with cutbacks in production (perhaps up to 40-60,000 tpa) owing to consolidation and modernisation underway in the key producing provinces of Shandong and Heilongjiang.

The future of graphite, and its supply to the foundry industry, will also be impacted by an emerging new market: “There is a coming demand conflict with the rise of the lithium-ion battery and raw material competition” said Moores.

If anyone was in any doubt about the inseparable relationship between bentonite and carbon when used in metal casting, then the passionate and animated presentation “Bentonite and carbon additives used in foundries” by Vic LaFay, Research & Technical Development Manager, Imerys Metalcasting Solutions, (co-written with Cornelis Grefhorst, Nick Richardson) certainly put the record straight. 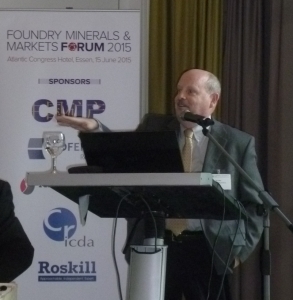 Following a brief review of global trends in casting, LaFay demonstrated exactly how bentonite and a Lustrous Carbon Former (LCF) were applied in metal casting.

“Not all bentonites are the same. Different mineralogies give different performance and colour” said LaFay. He also noted the increasing trend of blending of bentonite types which enhances foundry applications, “Selective bentonite blending means using less and paying more.”

LaFay concluded with a SWOT analysis of bentonite bonded sand, including indications of future threats from other materials such as plastics, resin binders/PUR Coldbox, and environmental regulations.

Andalusite’s role in the foundry market was covered by “A commercial overview of the andalusite industry” by Colin Bain, Commercial Director, Andalusite Resources (Pty) Ltd (inset bottom right in title picture), and “Usage of andalusite in the casting industry” by Michael Neeb, Managing Director, Mine Feuerfest GmbH + Co. KG.

Bain reviewed the world supply of andalusite, with production at about 310,000 tpa from just South Africa, France, China, and most recently Peru – noting the dominance of Imerys with operations in France, South Africa, and China (and as yet undeveloped reserves in Peru).

Neeb then explained the main properties and benefits of using andalusite: “Andalusite, when compared to other raw materials like bauxite and chamotte has less impurities and Fe2O3 +TiO2 content.” said Neeb.

Although the largest producer of chromite foundry sands, South African output reduced by 18% in 2014 to around 418,000 tonnes.

Racon made some interesting observations on China reprocessing imported metallurgical grade chromite for foundry use. “In 2014, Chinese production of foundry sand grade was around 200,000 tonnes through three ‘screening’ producers. One producer exclusively imports from South Africa, two others import from Iran, Pakistan, Madagascar, and Zimbabwe.” said Racon.

Racon concluded with some projections for the future, including the question: “Given the relatively low metallurgical grade prices, and the decreasing foundry sand grade prices, will China increase its screening capacity and output [ie. of imported met. grades for foundry use]?”

In “Chromite: from mine to market”, Robin Steger, Cofermin Chrome GmbH + Co. KG presented an extremely well-illustrated dissection of the chromite supply chain from South Africa to European markets.

This included a description of the geology and distribution of chromite in South Africa, processing and separation methods, quality control, logistics from Durban and Richards Bay to Rotterdam, further processing in Europe in Hamm, and packaging and distribution.

During the subsequent panel discussion, Steger considered that logistics costs contributed to some 25-33% of the overall costs of supplying chromite from South Africa to Europe.

After chromite, the other great workhorse speciality foundry sand is zircon. Chris Barrington, Executive Director, Zircon Industry Association, presented “The supply and application of zircon in the foundry industry”.

Barrington reviewed the properties of zircon, its applications and benefits in the metal casting industry. Barrington noted: “The relatively high cost of zircon has led to significant substitution by chromite and ceramic beads: chromite has a higher chilling effect than zircon, but higher acid demand, while chromite is less easy to reclaim than zircon.” He quoted some Roskill data stating the use of chromite in foundry sands had increased by an estimated 7% p.a. between 2003 and 2013, compared to 1.4% p.a. for zircon sand over the same period.

However, zircon appears to be holding its own in the investment casting process, and Barrington rounded off with a look at the status of potential new supply sources coming on stream to supply zircon in the future.

Dunite – a new blend with bentonite and silica sand

Rubio started by explaining how Pasek was diversifying its development of its huge dunite deposit in Spain, among other minerals including dolomite, into a number of markets, including the foundry industry.

Of particular interest, was Pasek’s move to start calcining dunite, and then blend it with bentonite and silica sand, and perhaps other additives, to produce a special premixed material for the foundry market.

In using dunite in foundry sand, especially in mould and coremaking material for casting of aluminium, manganese steel, bronze, and copper, Rubio described how clay and silica sand demand is reduced and there is a reduction in the cost of surface grinding. 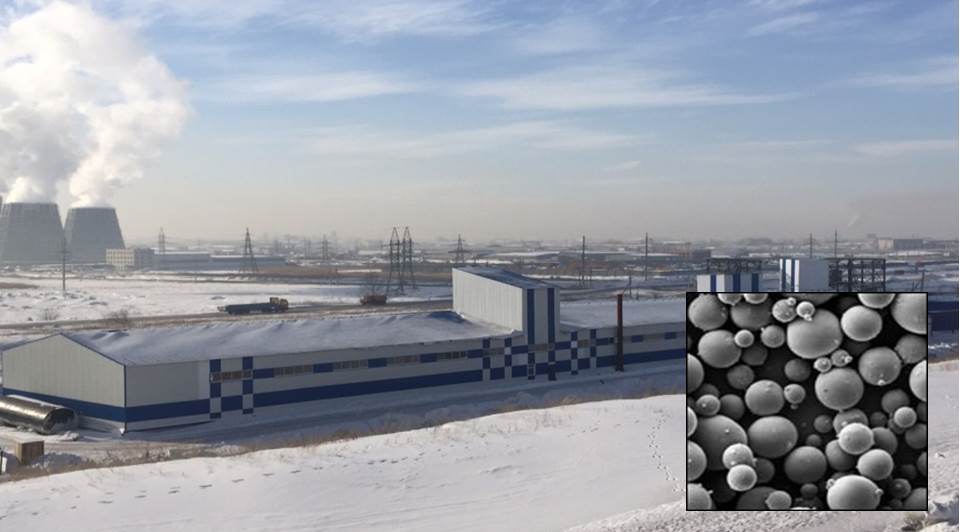 “The first cenosphere production in the world that is integrated with its supply source”; Eko Export, of Poland, has invested in a plant and patented process to harvest fly ash from a power station in Astana, Kazakhstan, producing 36,000 tpa of white cenospheres (inset). Courtesy Mine Feuerfest.

Grossmann outlined the main properties of cenospheres, described as alumina-silicate microspheres with low density, a hard shell, and a good flow rate due to their sphericity. Owing to the type of coal burned, white cenospheres have higher alumina (39-41%) and lower iron (1.5-2.0%) contents.

A new cenosphere producer was introduced, Eko Export of Poland, which has invested in a plant and patented process to harvest fly ash from a power station in Astana, Kazakhstan, producing 36,000 tpa of white cenospheres.

Grossmann claimed: “This is the first cenosphere production in the world that is integrated with its supply source, allowing collection of the cenospheres directly from the power plant with a direct pipeline plug-in.”

In this case, in a Japanese patented process, bauxite, mullite, or alumina are effectively fused at 2,200°C to form three grades of Spheresand exhibiting true sphericity, high refractoriness, low expansion, and high strength.

For application in investment casting, Liu demonstrated how Spheresand could reduce costs by about 40%, shorten the production cycle, and improve production efficiency from 8 to 1-2 days, enhance recyclability of shell materials, reduce waste emissions, and be flexible on design and improve casting yield.

Indeed, we have already begun taking bookings for sponsorships and exhibits, and offers of presentations have been accepted. Please do not hesitate to contact Ismene Clarke for the former, and Mike O’Driscoll for the latter.

A special thank you again to all of our speakers, sponsors, exhibitors, and attendees for making the event such a success. We hope to see you again soon.

For programme, attendees, pictures, and feedback please go to Past Forums.