Canada Fluorspar Inc.’s St Lawrence mine was officially opened, or rather, reactivated last month, following almost 40 years of exploration and attempts to restart operations since the mine was closed in 1978 (see history chart). 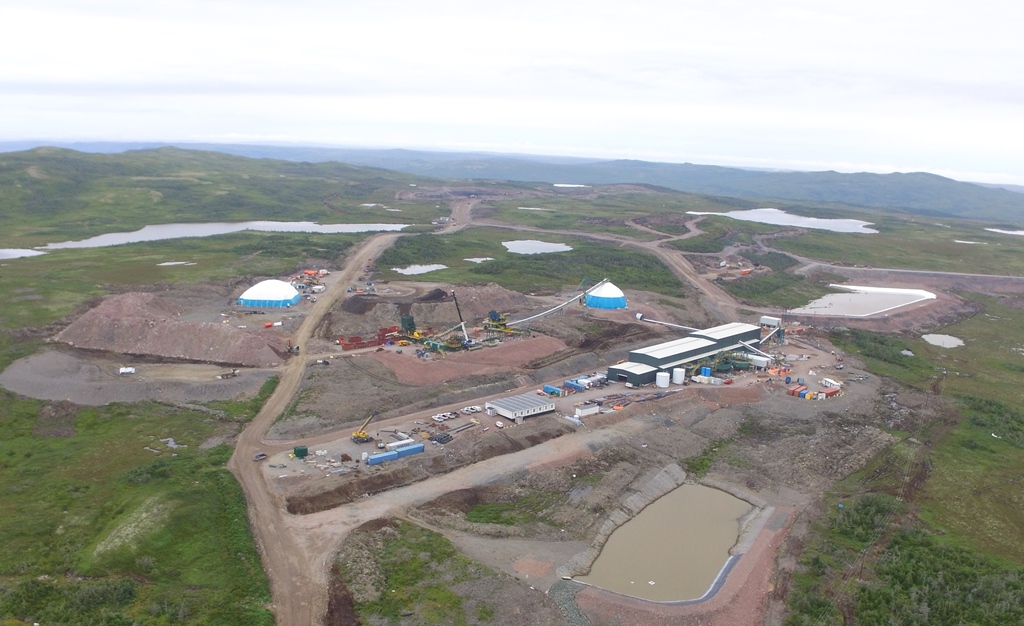 New horizons for Newfoundland fluorspar: the recently reopened St Lawrence mine site; sufficient ore will be mined to accommodate an expected 120,000 tonnes of concentrate production during the first year of operation. Courtesy Canada Fluorspar

The rejuvenation of the St Lawrence operation will be a major boost to the local economy of the Burin Peninsula, Newfoundland, on Canada’s Atlantic coast, as well as a welcome alternative source for North American fluorspar consumers reliant on Chinese and Mexican imports.

The mine opening follows a C$17m repayable loan pledged in March 2017 by the Department of Industry to Canada Fluorspar to help reactivate the mine.

This is the first of a raft of new producers for the world fluorspar market vying to come on stream in the near future.

Other emerging and potential new sources are located in South Africa, Sweden, and Afghanistan (see below).

These latest developments and their likely impact on the global fluorspar market are just some of the key issues that will be addressed at IMFORMED’s upcoming conference Fluorine Forum 2017, 31 Oct-2 Nov., Hilton San Luis Potosi – EARLY BIRD RATES END 15 SEPTEMBER.

For confirmed programme, including an exclusive visit to the world’s largest fluorspar mine and plant at Mexichem, plus registration details click here.

PLUS EXCLUSIVE VISIT TO MEXICHEM MINE & PLANT

The St Lawrence granite is host to over 40 significant fluorite bearing veins, varying in width from a few centimetres to over 30 metres, with a strike length ranging up to 3km.

The major host rock is a porphyritic peralkaline granite pluton of Late Devonian age that has intruded Late Precambrian and Cambrian volcanic and sedimentary rocks.

Historically, fluorite mineralisation in the St Lawrence area has been associated with the granite batholith and past exploration has been directed toward areas known to be underlain by granite.

Exploration of the AGS Vein (formerly the Grebes Nest Vein) during 2012-13 identified a significant fluorite bearing structure hosted in the meta-sediments, and hosting 9.4m tonnes of fluorspar (inferred and indicated). 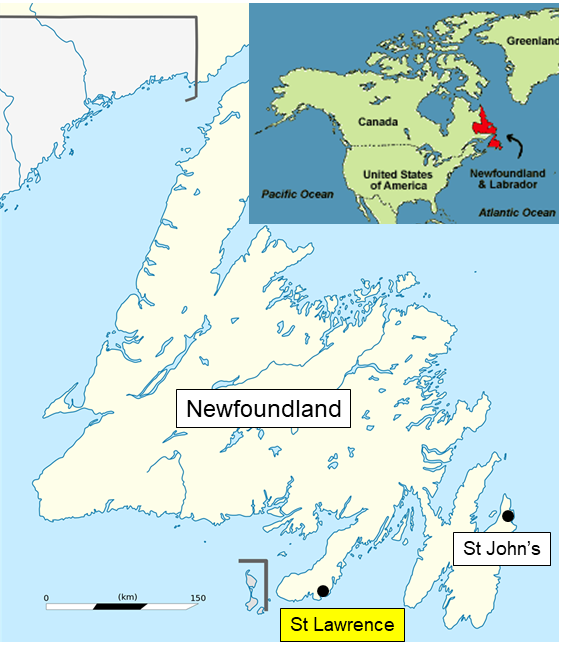 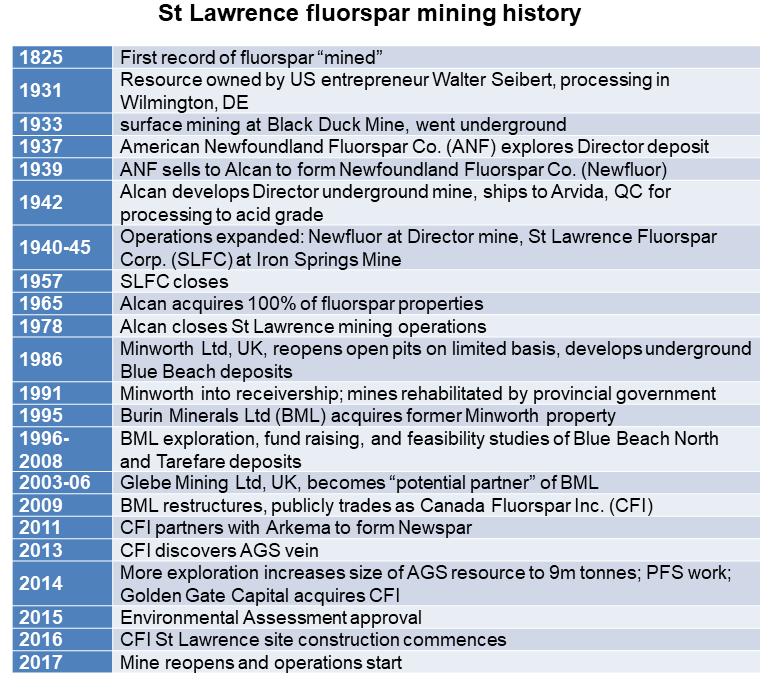 Since early 2016, Canada Fluorspar has been in construction phase: site preparation, open pit development, construction of infrastructure, installation of utilities, and restoration of temporary work areas.

Approximately 7km of mine roads were required to be built, with a water supply installation, and a tailings pipeline to connect the mill to the tailings management facility. 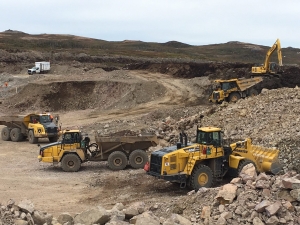 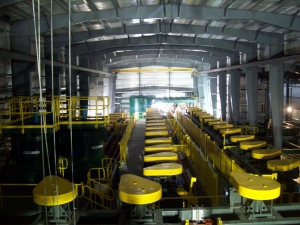 There are two phases planned for mine production to 2026: open pit and underground mining. The minimum required head grade will be 32% CaF2, at a minimum weight recovery of 26.7%

The first year of mining, with operations expected to commence in Q4 2017, will focus on ramp-up and commissioning the mill. 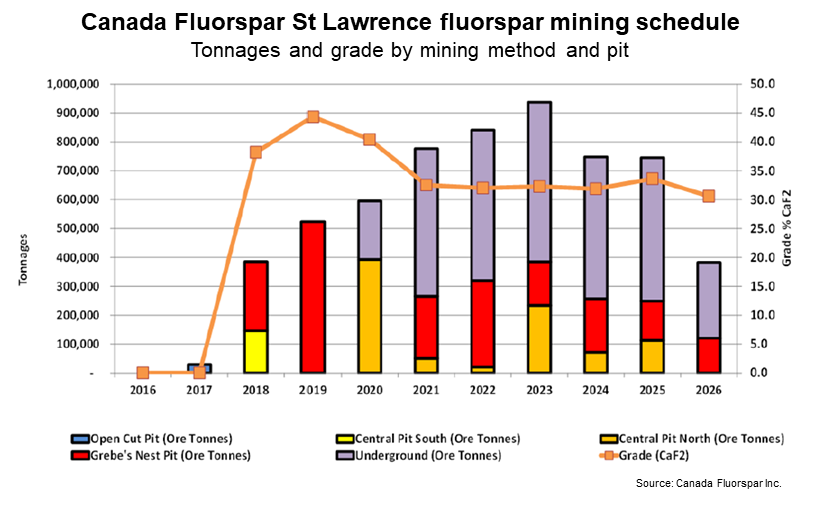 Sufficient ore will be mined to accommodate an expected 120,000 tonnes of concentrate production during the first year of operation to ramp up the mill.

Production will then increase to an average annual production of 200,000 tpa acidspar concentrate until 2026.

Underground mining is scheduled for Year 4, with the Central Pit South having been completely mined out and providing access for the underground portal and ramp development anticipated to commence in Year 2.

Underground operations will employ the Alimak or raise mining method. This is a “long-hole” method of bulk mining tabular narrow vein ore bodies which reduces the requirement for access levels and requires a lower number of sub-levels.

Canada Fluorspar will also operate a marine terminal facility at the nearby ice-free harbour at Blue Beach Cove, capable of handling vessels from 10,000-65,000 DWT and loading ships at a rate of 500 tph.

Demand for Chinese fluorspar from domestic consumers is increasing as China’s fluorochemicals industry booms and there is a real possibility that China may become a net importer of fluorspar.

These are just some of the top quality presentations at Fluorine Forum 2017:

In South Africa, SepFluor Ltd subsidiary Nokeng Fluorspar Mine (RF) (Pty) Ltd has started construction of its new fluorspar mine and plant, expected on stream by 2019.

This represents just Phase 1 of SepFluor’s ambitions to become a world leading source of fluorspar. Another mine, and HF and AlF3 plants are also planned (see Newsfile: Fluorspar renaissance rallies in South Africa).

Hard on the heels of SepFluor is SA Fluorite (Pty) Ltd with its development of the Doornhoek fluorspar deposit in North West province, expecting to secure mining rights by the end of 2018.

Amania Mining Co. of Afghanistan is planning to bring on-stream 120,000 tpa of acidspar in 2018, in addition to its existing 60,000 tpa of metspar output.

Established in 2010, Amania started exploring the Bakhud fluorite deposit in Uruzgan province from May 2013.

Base camp, water wells, access roads and other facilities have been developed in the licensed area. The company gained access to historical Russian mining and exploration data and a strategic exploration plan was conducted in 2014.

Amania has reserves of over 4m tonnes of fluorspar in a 50km2 area. The company already produces metspar, which is exported via Karachi, Pakistan. 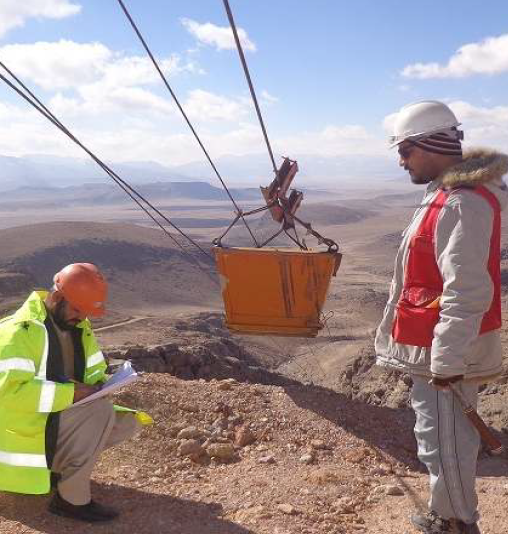 Extracting fluorspar from the Bakhud fluorite deposit in Uruzgan province; Amania is aiming to produce acidspar in 2018. Courtesy Amania Mining

Tertiary Minerals PLC, of the UK, is active in developing three fluorspar projects, two in Europe and one in the USA.

The most advanced is the Storuman Project, located in north-central Sweden, with 2.3m tonnes of recoverable, open-pit mineable fluorspar, with a conceptual acidspar output of 100,000 tonnes. The project was granted a 25 year Exploitation (Mine) Permit in 2016.

A number of key issues have, however, resulted in delays to the project. The government has asked the Swedish Mining Inspector to re-assess its grant of the Mining Concession in the light of a Supreme Court decision to overturn the grant of a third party mining company’s mining concession in the south of Sweden.

This re-assessment, intended to consider the impact of mining in the concession area on a wider surrounding area, is ongoing and Tertiary is hopeful of a positive outcome.

The Lassedalen Fluorspar Project is located in southern Norway, where Tertiary holds exploration permits on a 4m tonne fluorspar deposit that was mined during the Second World War. The company has commenced due diligence work.

The MB Project is located near Eureka in central Nevada, USA, where drilling in recent years has demonstrated a very large resource of low-grade fluorspar: 86m tonnes @ 10-11% CaF2 has been estimated (indicated and inferred).

Technical and economic studies are continuing which include metallurgical studies aimed at production of acid grade fluorspar and the evaluation of a potential by-product industrial filler grade mica. A Scoping Study is expected to be completed in 2017.