Despite the cautious rally of oil prices in recent weeks the oil industry has remained depressed. In such downturns it is often imperative to glean market knowledge as never before.

So perhaps it was no surprise that last week’s Oilfield Minerals & Markets Forum Houston 2016 organised by IMFORMED with a packed programme of expert speakers, attracted a strong attendance from across the oilfield mineral supply chain. 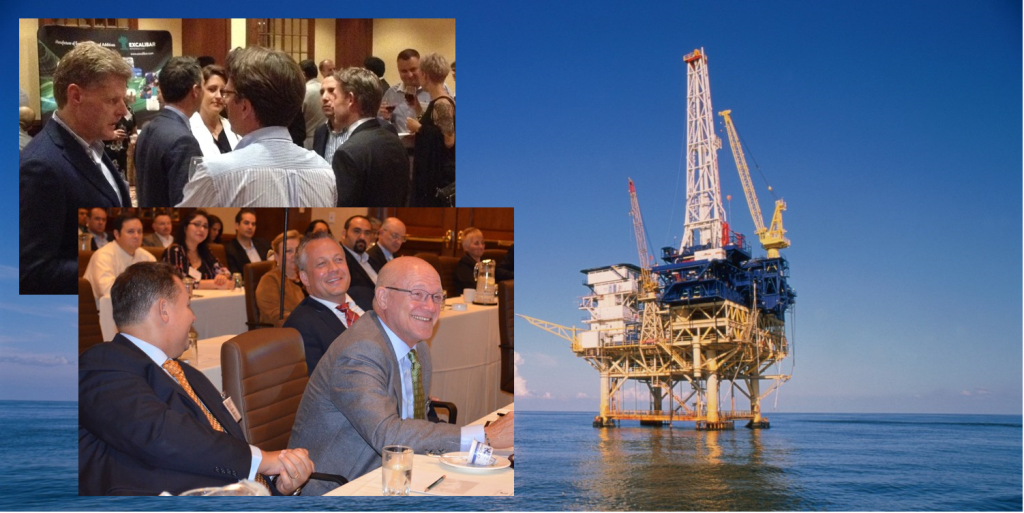 With the market poised to start recovery in the near future – perhaps late 2016 at best, or mid-2017 at worst – 130 attendees from 16 countries turned up to draw on high level analysis, discussion, and networking in the oilfield minerals sector at the charismatic Houstonian Hotel, 5-7 June 2016. 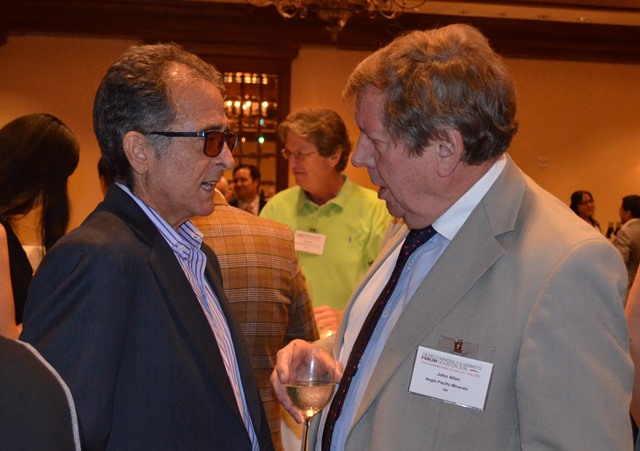 There are over 30 different industrial minerals used in oilfield applications for drilling, stimulation, completion, production, well cementing, and surface preparation and cleaning.

Most minerals also serve other markets, although the fortunes of barite and to some extent bentonite, are very much tied to the oilfield sector’s performance. 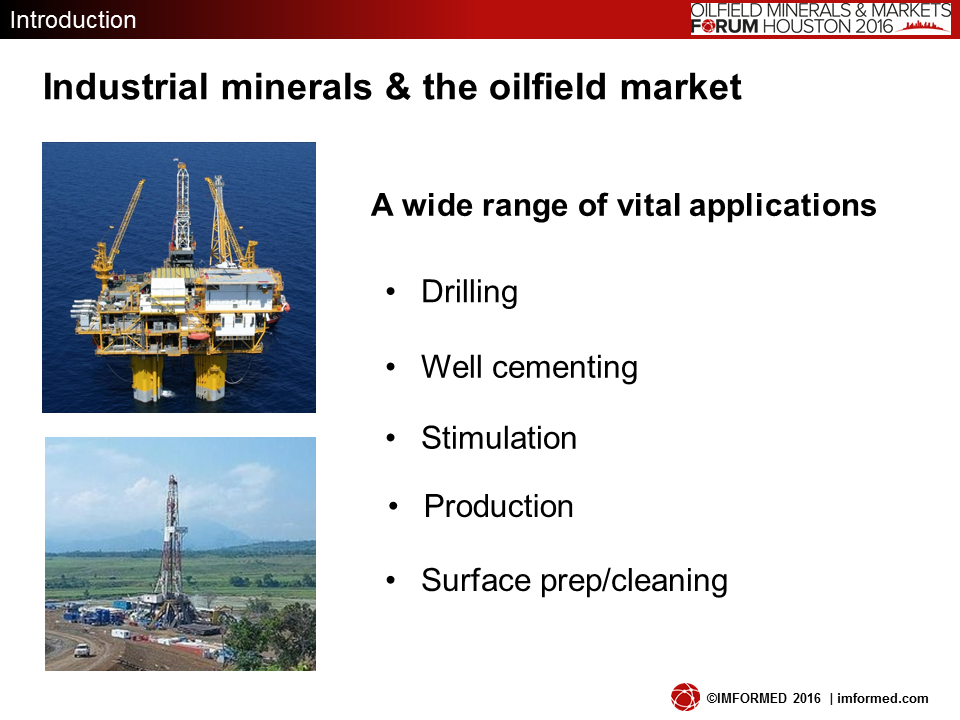 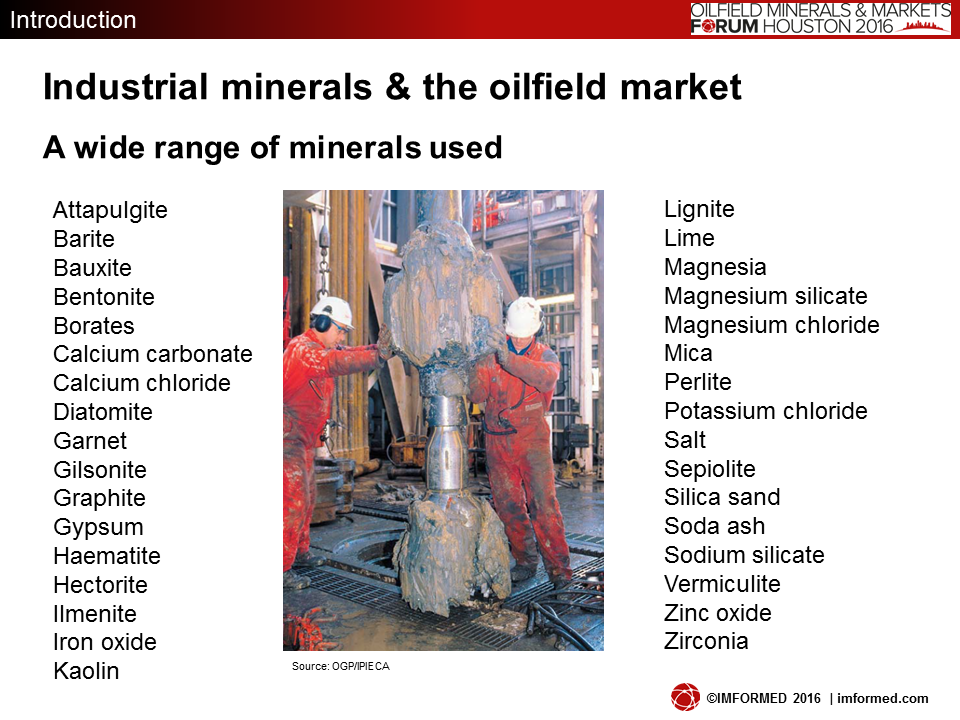 Mike O’Driscoll, Director, IMFORMED opened the Forum with a look at the big picture of future energy demand, the outlook for oil and gas production and consumption and its impact on the future requirements for industrial minerals used in the oilfield sector.

Key areas to watch will be the growing demand for gas as the future fossil fuel of choice, particularly from the Asia Pacific region, and with this an expected increase in shale gas development, not only from North America, but also from China and the Middle East. 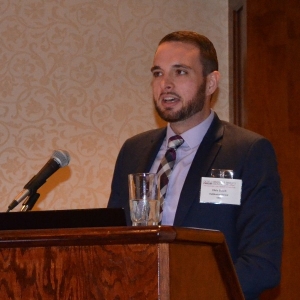 With the market decline, Bosch estimated barite consumption in drilling would hold about a 70-75% share of total barite demand in 2016 (down by some 10% from say 2012).

Notable trends included increased investment in mining and production activities in China to optimise supply capabilities; Morocco has continued to expand capabilities to produce 4.2+ material, and is now ranked as the world’s no.2 producer after China; and 4.2 SG deposits are being mined effectively in new areas and improved technology has changed the narrative.

Teutsch outlined the debate over the pros and cons of increased viscosity in drilling fluids, and said that on balance smaller particle size weighting agents were “in”, and that on this topic “the market had spoken”. 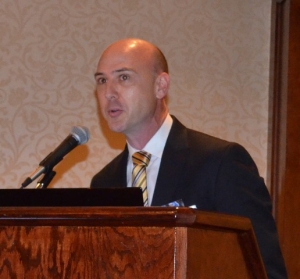 As ever, logistics remained a common denominator throughout the Forum: Bosch reminded that logistics costs made up about 22% of the delivered price of barite.

The audience was reminded of the total imbalance of cargo demand and fleet supply at present, with scrapping to reach the same level and deliveries this year. No recovery in the freight market is expected during 2016 or 2017.

For mineral suppliers, while on the one hand the situation of record low freight rates is attractive, Hoppe and Petersen urged careful due diligence on the choice of shippers owing to the high rate of bankruptcies and business failures occurring in the market. 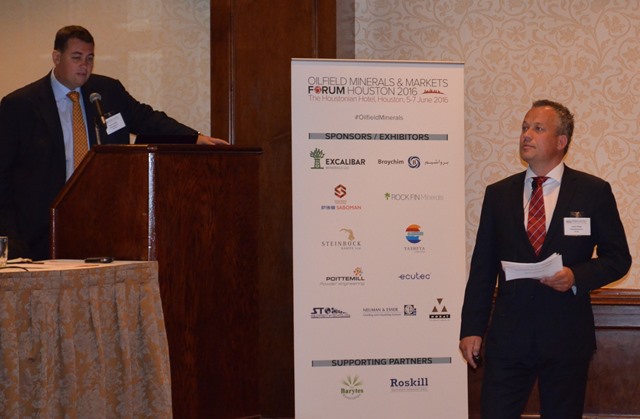 Vikings take the stage on the shipping outlook, with not much improvement expected for freight rates in the next 1-2 years: Jesper Hoppe & Morten Petersen, Viking Shipping Norway.

Dodd also pointed out the ramifications of the impending SOLAS Container Weight Verification Requirement, effective 1 July 2016, where a container must be weighed before loading to ship. 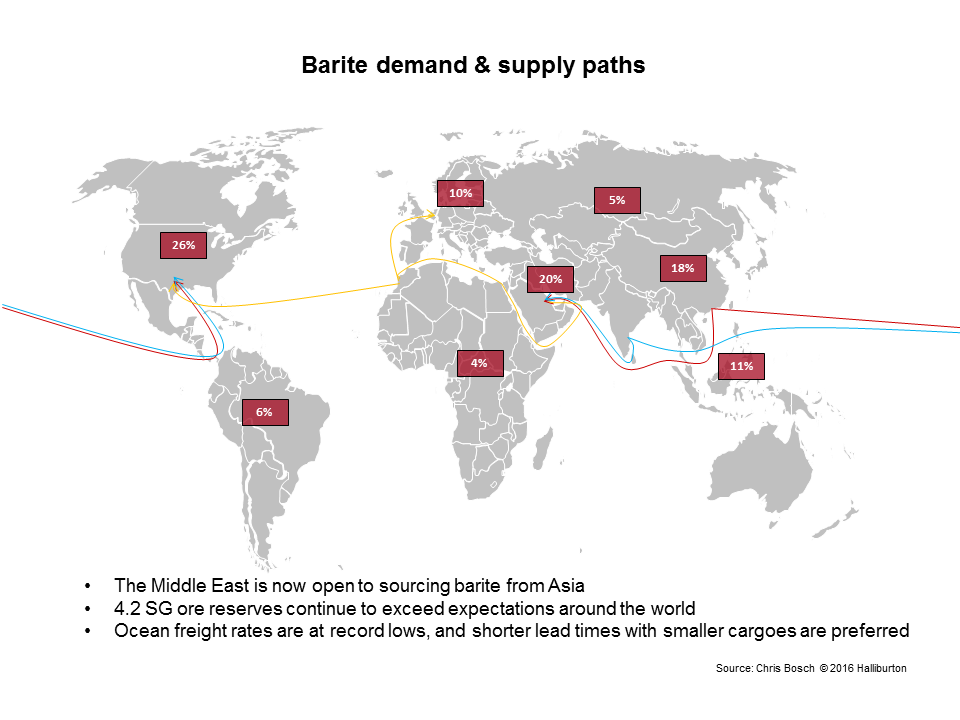 “Borates in oilfield applications” by David Schubert, Principal Scientist, US Borax Inc., highlighted the use of mineral borates and refined borates in the oilfield sector.

In fracking fluids, the single largest use of borates in oilfield, borates are used as crosslinking agents to produce rheological fluids. The borates form “self-healing gels” that recover viscosity after high shear. 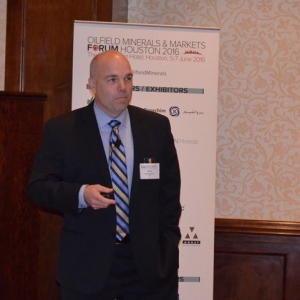 Introducing himself as the “K Man”, Jeff Blair, VP Sales & Marketing, Intrepid Potash presented “Potash and its role in oil and gas production”.

Evidence from frac treatments by Halliburton and in Western Siberia showed that a frac solution containing 7% KCl was preferable.

Trepess explained that there is a trend away from using ceramic proppants to frac sands. Under high pressure environments (7-10,000 psi) frac sand fails and starts to crush. However, the crushed proppant can help keep slipped fractures open.

Trepess demonstrated that a prevailing “nanoDarcy environment” favours continuous use of frac sand rather than expensive ceramic proppants. 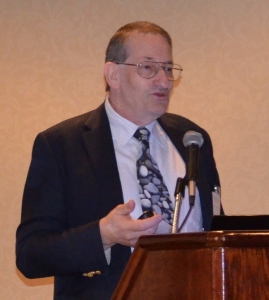 OSHA PEL (permissible exposure limit) for respirable crystalline silica dust was revised downward on 23 March 2016, and the current PEL is 0.1 mg/m³; OSHA announced the PEL will be lowered to 0.05 mg/m³ effective 23 June 2016.

Flowers questioned whether spherical proppants were the future: “There is a physical limit on how round and how tightly sieved a product can get. The more spherical and smooth the pellet the more likely to encounter flowback issues. Are we reaching the limit of spherical proppants today?”

He introduced rod-shaped proppants, which Imerys has been producing for some years now, exhibiting higher porosity, around 45%, higher conductivity and “built-in” flowback control due to its packing arrangement.

Flowers tracked the rise and fall in US proppant demand over the last few years, with forecasts showing much reduced future demand in 2016-18, especially in ceramic proppant consumption at around 0.6-0.8bn lbs (compared to 3.4bn lbs in 2014).

One particular factor of interest is the amount of drilled uncompleted (DUC) onshore wells in the USA, standing at some 8,150. Flowers said this inventory represents six months of completion activity (based on 2015 monthly average), and means US producers can react quickly to recovery, with the Permian Basin expected to remain the most active in the short- mid term. 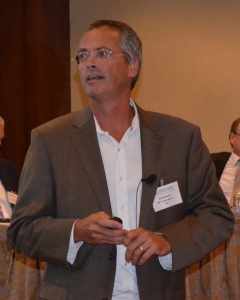 LWP’s 3,000 tpa pilot plant in Brisbane was commissioned in August 2015 and has produced ceramic proppants tested at 12,000 psi. The company has sold its first licence to convert bauxite-based proppant facilities to fly ash-based proppant processing in India.

Later this year, LWP is aiming to complete production of porous and ultra-lightweight proppants.

Roettle underlined the key factors of the ceramic proppant processing: “recipe”, sintering, and shaping, and explained the stages of milling, mixing and pelletisation, screening, and sintering,

Day 2 was devoted to the barite sector covering supply from Morocco, India, and China as well as developments in processing. 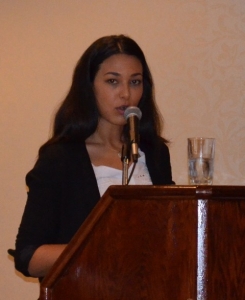 With 6m. tonnes of barite reserves and five mines, Broychim has grown steadily as a major supplier of barite since 2002, and in 2014 installed its third grinding plant at Safi.

The state of Andhra Pradesh holds more than 90% of India’s barite reserves, and within the state APMDC holds almost 98% of the reserve.

In 2015, India slipped to fourth position after China, USA & Morocco, and accounts for 11% of global supply. Temporary disruption at the Mangampet mine resulted in a decline in supply in 2015.

APMDC is aiming at a 3m. tpa production rate for FY2016, and to 5m. tpa over the next two to three years.

Gray explained triboelectrostatic separation as an environmentally responsible and water-free process with which to beneficiate minerals. STET has proven separator applications with barite, talc, calcium carbonate, potash, and fly ash. 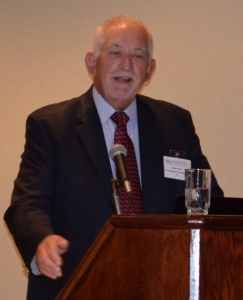 In this he described functions of biopolymers and their synergies with minerals in oilfield applications, such as using levan as a lost circulation material enhancer with calcium minerals.

Owing to many of China’s commercial deposits being mined for over 30 years, much of the best quality material of these mines has already been consumed. The average specific gravity in many producing mines in China today is in the region of 4.10.

Wang said that the majority of Chinese shipments of 4.2 barite ore are blended cargoes of high grade and low grade material, as well as jigged product. Some Chinese barite shipments, owing to the large size cargo of 68,000 tonnes, maybe composed of barite from multiple sources.

While there is an abundance of barite resources in China, many of these mines are undeveloped, difficult to explore or commercially unviable. 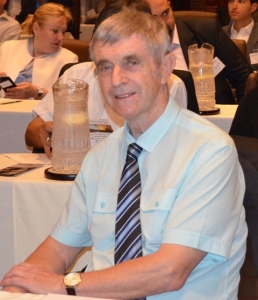 In January 2016, Guizhou Gulf Minerals was joined by Rocky Mountains, Xinshike, and Jun Wang Mining Co. Ltd, and in May 2016 by Yichang Zhongrun Barium Industry Co. Ltd, to export barite from China.

Wilson proceeded to review the extensive range of deposits, mines and plants operated by the companies, for both drilling and chemical grade barite, across Guizhou, Guangxi, Hubei, Hunan and Yunnan provinces.

Guizhou Gulf will mainly use Fangcheng Port for exports of barite, in both bulk and containers, with the port also hosting its office and laboratory. 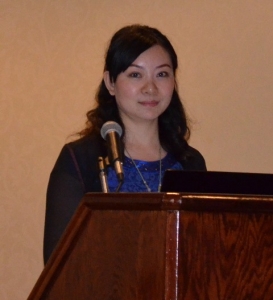 “Everyone has a plan ’till they get punched in the mouth.”, Rita Hu, General Manager, Guizhou Saboman quotes Mike Tyson in her analysis of essential elements to success.

Using the facilities and operations of Guizhou Saboman as an example, Hu explored the essential elements of technology, cost, ideas, team, and timing, that can lead to opportunities.

Using Mike Tyson’s quote: “Everyone has a plan ’till they get punched in the mouth.”, Hu warned that timing in the market was crucial to business success.

IMFORMED is delighted with the success and positive feedback from delegates on Oilfield Minerals & Markets Forum Houston 2016, and is already looking forward to planning next year’s conference with delegates’ comments and suggestions in mind.

Indeed, we have already begun taking bookings for sponsorships and exhibits, and offers of presentations have been accepted. Please do not hesitate to contact Ismene Clarke for the former, and Mike O’Driscoll for the latter.

A special thank you again to all of our speakers, sponsors, exhibitors, and attendees for making the event such a success. We hope to see you again soon. 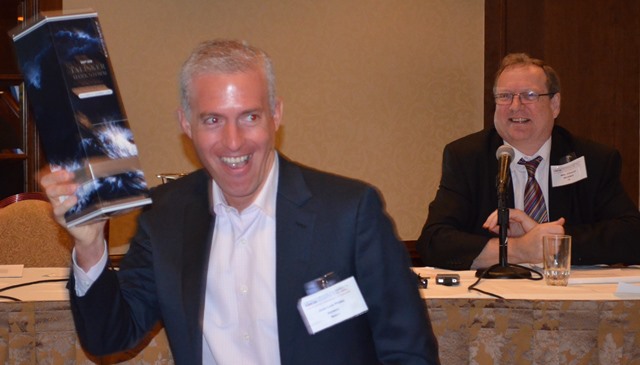 Some consolation in the downturn: Juan Luis Prieto, President, Baramin walks off with the Forum Finale Draw Prize, a bottle of Scotland’s Finest. Congratulations! And here’s to better times next year

For more pictures of Oilfield Minerals 2016 please go to Gallery.

Ensure you don’t miss any news and updates on the next Oilfield Minerals & Markets Forum: Sign up here