Graphite’s future: what lies ahead?

Graphite’s future: what lies ahead?

As industrial minerals go, graphite can be as exciting as it gets (no disrespect to US frac sand developers in the mid-2000s!).

There are few commercially developed sources, distinct grade development and specifications are required, and processing and logistics can be tricky if you don’t get them right.

Then, along comes the promise of a game changer in the energy industry – Li-ion batteries – which could potentially require a great deal of graphite in the future.

Oh, and as a sideshow in the graphite world, there has been the emergence of the “wonder material” graphene, which is apparently set to revolutionise manufacturing technology for a wide range of applications.

All told, a heady mix if you’re involved in the black stuff of graphite.

To make sense of it all, and gain knowledge of the latest market trends and developments, while at the same time networking with the leading players of the industry, you need to attend:

The world’s new meeting place for the natural graphite industry brought to you by IMFORMED and Benchmark Mineral Intelligence.

The rise of the lithium ion battery market has unleashed a torrent of investors and developers keen to ride this new market wave.

According to Benchmark Mineral Intelligence, demand for graphite used as anode material in lithium ion batteries is set to increase by over 200% in the next four years as global cell production surges on the back of maturing pure electric vehicle demand and the inception of the utility storage market.

Benchmark forecasts the battery anode market – which is nearly exclusively served (98%) by naturally sourced spherical graphite and synthetically produced graphite – to increase from 80,000 tpa in 2015 to at least 250,000 tpa by the end of 2020, while the market could be as large as 400,000 tpa in the most bullish of cases with no supply restrictions.

Taking the most conservative case, Benchmark estimates that over 360,000 tonnes of medium flake graphite will be needed as a feedstock source for the spherical material by 2020. This is nearly a doubling of the flake concentrate market in 2015 should the natural-to-synthetic demand proportions remain the same in 2020. 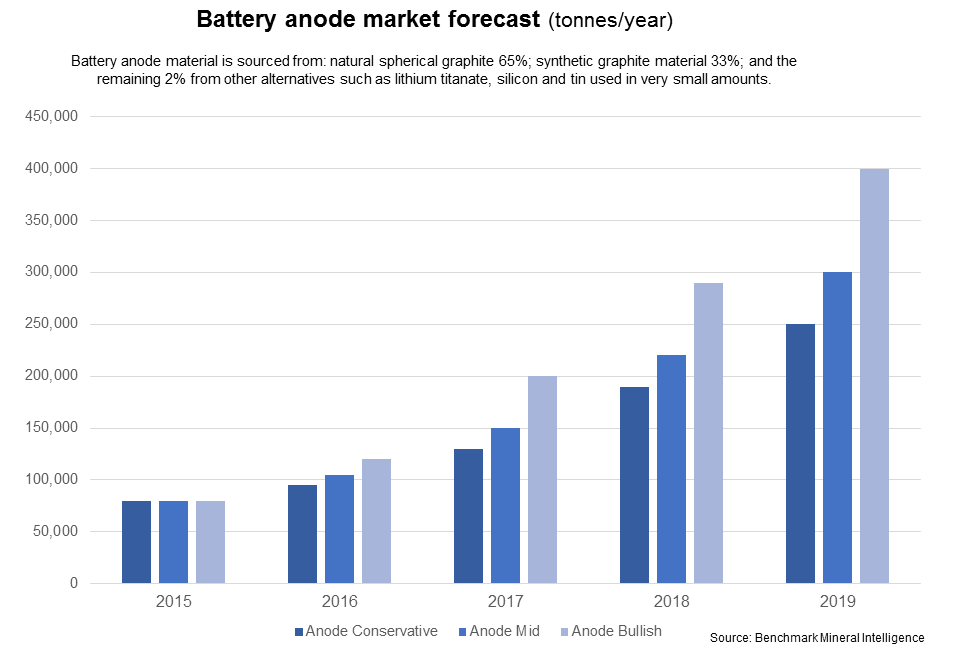 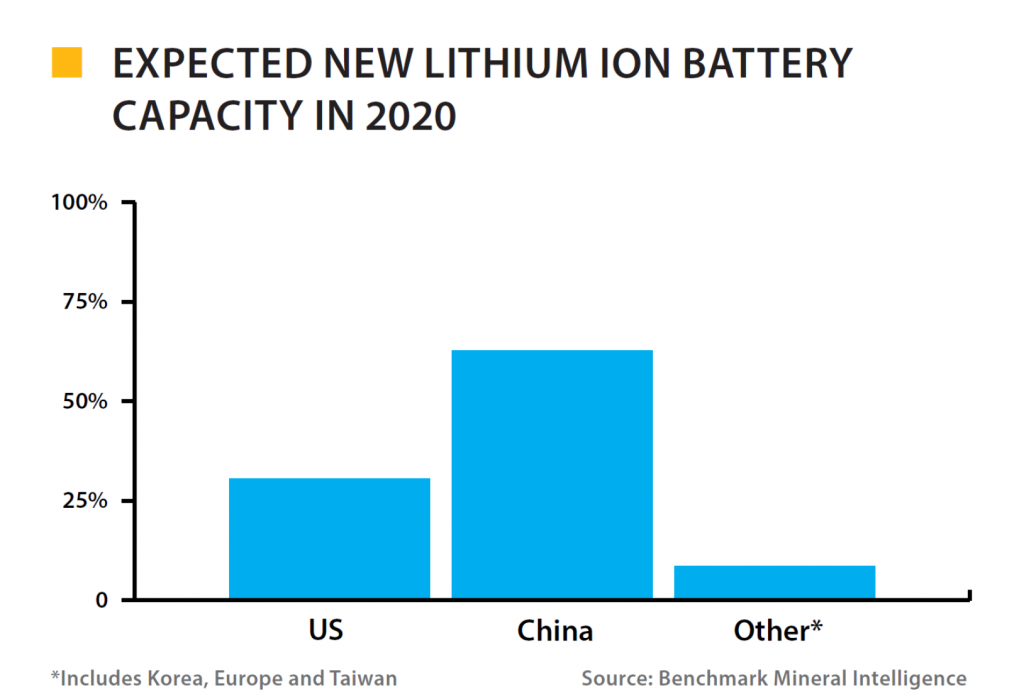 Unsurprisingly, such developments have instigated a serious upsurge in graphite project developments among new and established graphite players in order to meet this potential new demand.

Also driving the quest for new graphite sources has been the continuous difficulties arising with Chinese graphite supply in recent years – historically the world’s largest supplier accounting for around 60% of world flake graphite production.

That said, it is notable that much of the anticipated Li-ion battery manufacturing capacity is expected to be located in China, and certainly Asia overall.

Around 65% of all battery anode material is sourced from natural spherical graphite, 33% from synthetic graphite material, and the remaining 2% from other alternatives such as lithium titanate, silicon and tin used in very small amounts.

Simon Moores, Managing Director, Benchmark Mineral Intelligence, commented: “So basically the future’s bright for anyone in graphite for batteries. The only question remains over the market share of natural versus synthetic.”

“With natural much cheaper to produce, by up to 50%, the only question is whether the natural spherical capacity – in the right qualities – will be on stream in time to service the increasing battery demand. It probably won’t be, which is why synthetic graphite will continue to command a reasonable share 25-35% between now and end-2020. ” said Moores.

Analysing consumption trends over the last 10 years, Benchmark concludes that there is little doubt that battery consumers prefer naturally sourced graphite, which is much lower cost to produce and has a lower environmental impact than synthetic graphite. 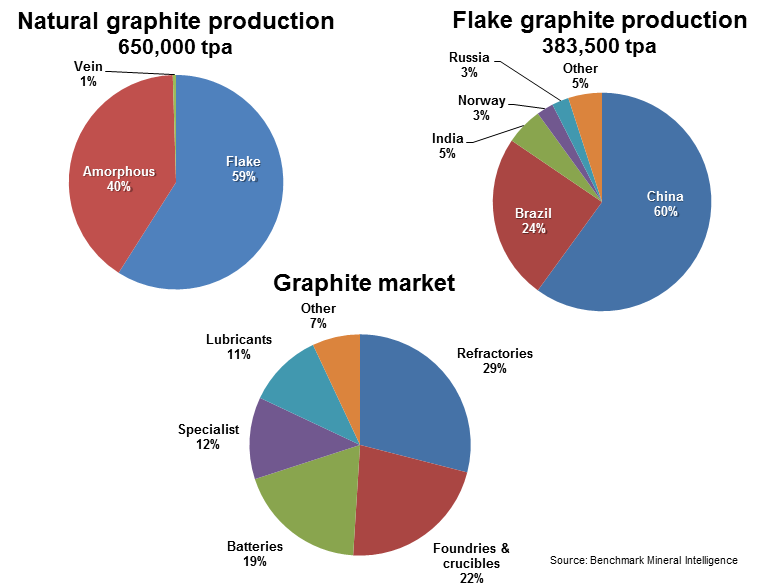 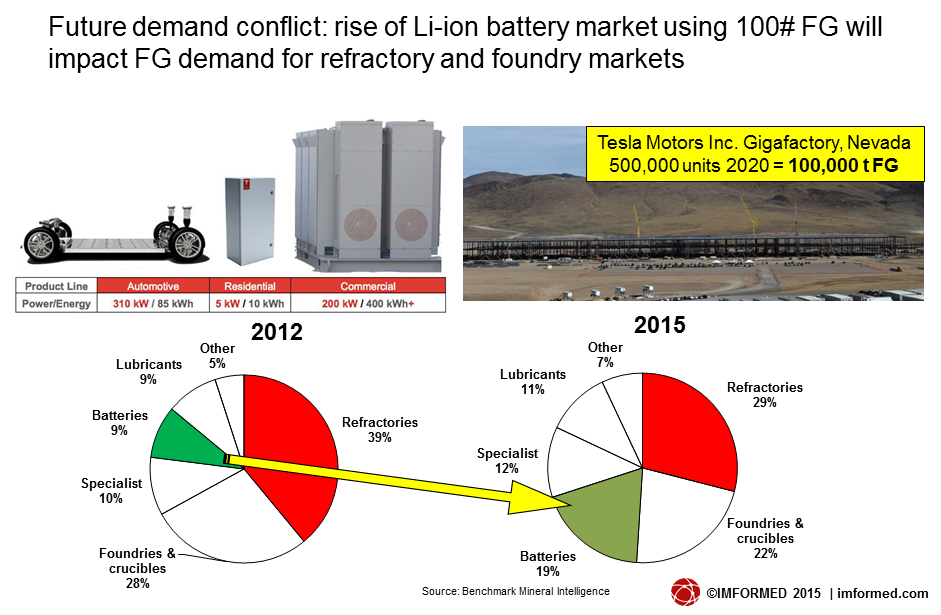 Market realism: what of the “traditional” graphite markets?

Should forecast demand for graphite in batteries play out, then it is expected to take over from refractories as graphite’s leading end use market by 2020.

However, graphite remains a primary workhorse raw material required by the metallurgical industry: used in magnesia-carbon refractories for steelmaking; as a recarburiser in steelmaking; and in crucibles and coatings in the foundry sector.

The material is also still in demand as a lubricant and in a host of smaller volume uses such as in the oilfield, polymer, agriculture, and nuclear industries.

These markets should not be overlooked by project developers, since they are likely to remain the meat and drink consumers for any graphite producer until the Li-ion battery market really takes hold, and even after that (just take a look at the forecast graphite demand chart below).

Moreover, steel and metal manufacturing, while tied to the vagaries of overall economic performance (ie. construction, automobiles, shipbuilding, manufacturing), has a strong future and might remain more stable than the new era of energy provision. 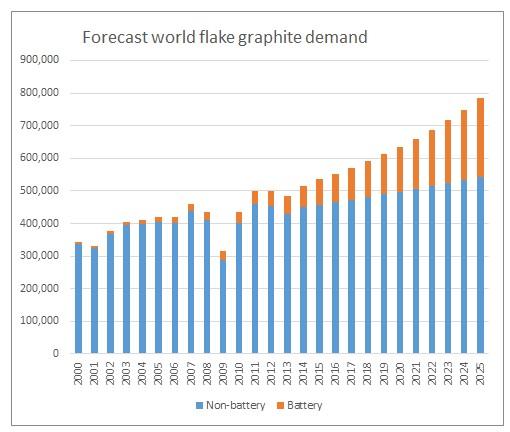 Using data from the USGS up to 2014. Forecasts for non-battery use are based on a growth rate of 1.7% per year (extrapolated from data between 2000 and 2014). Forecasts for battery grade graphite demand are based on the forecast battery demand growth, assuming a split of 65% natural to 35% synthetic and a yield of 0.4 tonnes of battery grade graphite per tonne of flake graphite. For the ten years between 2015 and 2025, forecast demand growth is about 250,000 tonnes per year, of which 180,000 tonnes will be used in the production of lithium ion batteries. Source: Jaberwock

How to make sense of it all

Brought to you by IMFORMED and Benchmark Mineral Intelligence, Graphite Supply Chain 2016, 13-15 November 2016, Newport Beach, LA, will bring together a host of leading graphite experts to discuss these issues and more.

Join us for 3 days of presentations, workshops and networking events all dedicated to examining the present and future of the natural graphite industry.

Other topics to include:

• The surging lithium-ion battery market: the next 5 years
• Recaburiser market outlook
• China: the future for graphite supply and demand
• Europe review of graphite supply & demand
• New suppliers in the pipeline