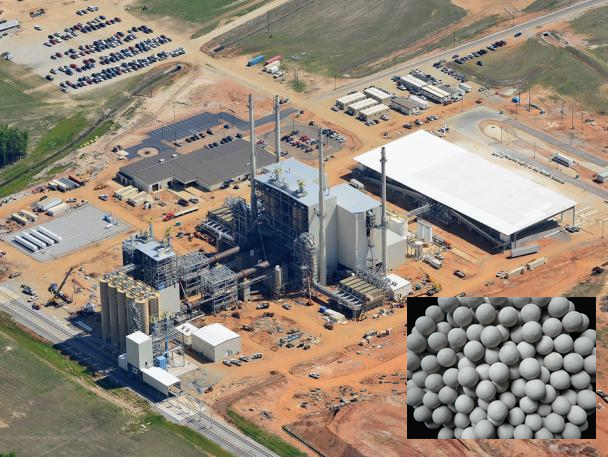 The phrase “building on sand” has an unfortunate ring of reality to those ceramic proppant suppliers striving to attain some purchase on the wave of recovery currently sweeping the North American hydraulic fracturing market today.

Proppant producers and oilfield service companies are enjoying a most buoyant recovery period from the oil price decline doldrums of 2015/16, driven not only by a moderate recovery in oil prices but by impressively increased proppant loading levels, longer laterals, and more frac stages per lateral.

Evidence from first quarter performances of proppant suppliers and users has signalled a strengthening trend, commencing in Q4 2016, in increasing fracking and proppant use which is expected to continue through 2017 and into 2018.

Early estimates of US proppant consumption for the year of around 55m short tons, with the potential to rise to 80m tons in 2018 have been blown away by more recent figures of 75m tons for 2017 and >100m tons for 2018.

However, this is mostly all demand for frac sand, ceramic proppants simply do not get much of a look-in. Indeed, proppant and fracturing expert Pickard Trepess, Managing Director, FRAC PT FZE, will be explaining just why silica sand successfully substitutes ceramic proppant in some shale fracs at Oilfield Minerals & Markets Forum Houston, 21-23 May, The Houstonian Hotel (click for programme and details).

For many years, and during the last golden period 2010-12, the proppant market share was in the order of 80% frac sand, and 10% each for ceramic proppants (CP) and resin coated sand (RCS).

Owing to E&P companies pursuing innovative and lower cost fracturing treatments using sand, this ratio has shifted to around 95% frac sand, with 5% shared by CP and RCS. 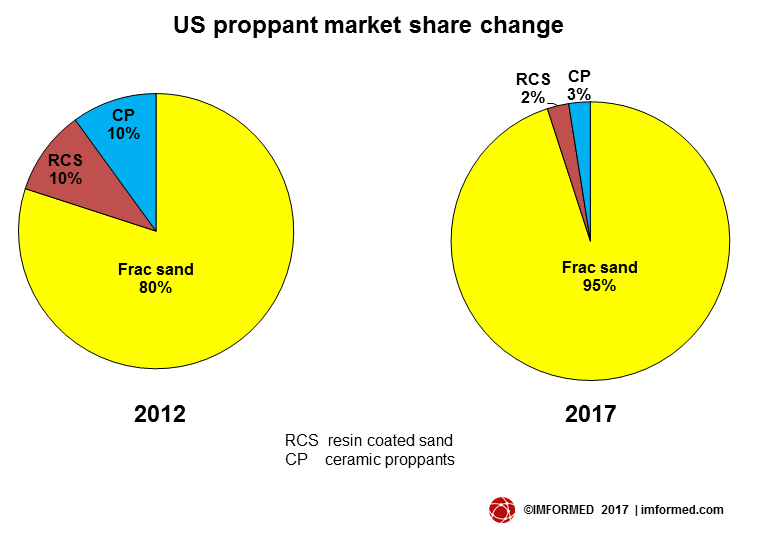 The market downturn and continuing trend of using more volumes of frac sand rather than CP has naturally prolonged the early 2015 idling of most of the USA’s CP production capacity (see Proppants: Carbo Ceramics idles US & China plants in 18% capacity cut; Proppant prospects postponed? Be patient).

Few, if any of the idled plants of Carbo Ceramics, Saint-Gobain, and Imerys are expected return to production any time soon, although whether they will suffer the same fate as Oxane Materials and Shamrock Proppants remains to be seen.

The upshot is that around 80% of US CP production capacity is not operational, leaving a potential 680m lbs/yr capacity active, although even some of this maybe underutilised. Precise numbers are difficult to acquire owing to undisclosed outputs and changing production levels at reduced rates, but see the accompanying table for a guide. 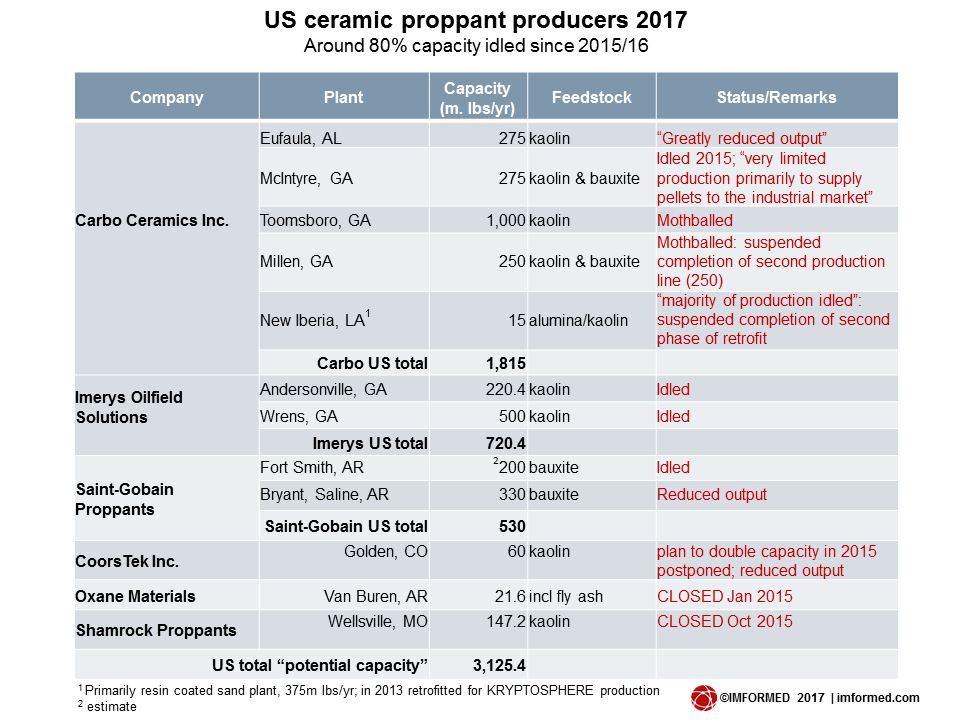 During 2016, Carbo’s overall total CP plant utilisation was as low as 18% of stated capacity (total capacity 1,900m lbs/yr, including the Kopeysk, Russian plant at 100m lbs/yr). The company does not expect any significant improvements to capacity utilisation in 2017.

The Millen plant remains mothballed, the “majority of production” at New Iberia idled, the Toomsboro plant is idled, and there is “very limited production primarily to supply pellets to the industrial market” at the McIntyre plant, initially mothballed in 2015. The majority of Carbo’s CP production is now from Eufaula, Alabama and Kopeysk, Russia.

Carbo has suspended completion of the second production line at Millen, Georgia, and also the second phase of the retrofit at New Iberia with its KRYPTOSPHERE® technology.

Carbo ceased operations at its Luoyang, China plant in early 2015, sold off inventories, and does not intend to resume operations in China.

During the Carbo Ceramics Q1 teleconference call there was revealed “an interest level in the market” for some of the company’s international assets. Presumably this includes the Chinese and Russian CP operations, and we shall have to await the outcome, if any, of this.

Another ramification of the CP market malaise for Carbo in Q1 2017 was an impairment charge of $1,065,000 on bauxite CP feedstock raw material inventories. 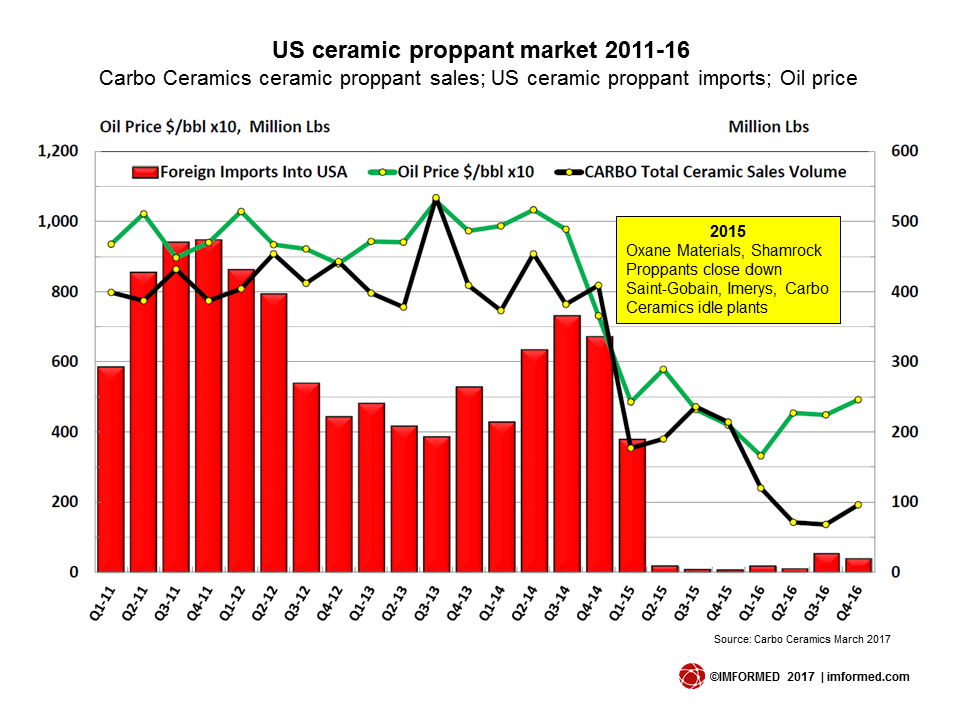 In its Q1 statement, CP world leader Carbo Ceramics Inc. admitted the oil price recovery had still not encouraged a move away from low cost completions, with their existing or target customers continuing to use more third party raw frac sand than CP or RCS as a percentage of overall proppant consumption. Carbo expects this trend to continue.

This trend, together with an oversupplied CP market that is liquidating imported inventory, directly impacted Carbo’s sales volumes for Q1 2017.

Carbo’s Marshfield, Wisconsin frac sand plant (raw sand is purchased) was idled in early 2016, but by the fourth quarter, sand volumes sold more than tripled on a sequential basis from 46m lbs to 149m lbs pounds. Carbo is in the process of bringing the plant to full utilisation during 2017 (1,500m lbs/year or 750,000 tpa).

Carbo is clearly accepting the situation with regard to CP demand and is focusing its efforts not only in frac sand production but in diversification into new product markets (ceramic grinding media, mineral processing, and foundry markets), partly using its idled CP plant assets.

Gary Kolstad, President and CEO, Carbo Ceramics, said: “Our strategy is to reduce our reliance on base ceramic proppant. We believe the worst of the industry down cycle is behind us. While imports of low quality Chinese ceramic have been virtually zero over the last eight quarters, it appears some competitors are still pricing below cost. However, this is not a sustainable strategy over the long term.”

“We are focusing on the foundry, the grinding, and the mineral processing industrial market segments because they are very large, they are less cyclical than the oilfield, and they fit our technology, people and asset base very well.”

“We expect to see continued expansion of our technology products, industrial ceramic media, frac sand, and environmental businesses. We believe our 2017 revenue will show strong double digit growth of at least 40% increase over 2016” said Kolstad.

Carbo is expanding its ceramic media product portfolio. With regard to mineral processing, the company is entering into agreements with other companies to produce products for them. 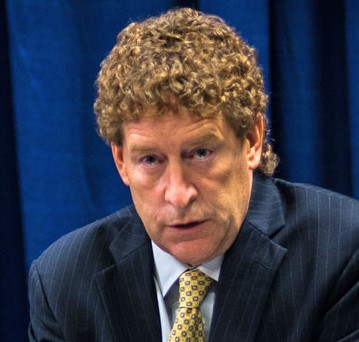 “Our strategy is to reduce our reliance on base ceramic proppant. We are focusing on the foundry, the grinding, and the mineral processing industrial market segments” Gary Kolstad, CEO, Carbo Ceramics.

Carbo is also looking to take advantage of the impending 2018 OSHA regulations on reducing the permissible exposure limit of silica in the foundry industry, by encouraging more use of ceramic media than silica sand.

The strength of this diversification would seem to suggest how Carbo recognises the future for CP – there maybe some recovery in demand, but not enough? Kolstad admitted that in Q1 2016 its base CP accounted for 70% of the company’s business, but in Q1 2017 this was reduced to 30%.

Perhaps it was most telling when in answer to an analyst’s question about the potential of refracking wells possibly recovering some CP demand (answer: not much, there is little refracking at present), Kolstad acknowledged: “Today, it’s lowest cost wins.”

Nevertheless, Carbo is to maintain its CP business ethos, or, as Kolstad put it: “We’ll still continue on with our religion of conductivity and worrying about EURs [Estimated Ultimate Recovery]. 50% of the wells in the US will have closure stress above 6,000 psi, the point at which the best white sand starts crushing.”

There is some light shining on its ultra-strength CP grades: KRYPTOSPHERE HD continues its adoption in use for the tough well conditions, while KRYPTOSPHERE LD sales have increased in recent quarters. Carbo believes sales of these grades will continue to grow in 2017 and the company expects another KRYPTOSPHERE HD contract in the second quarter.

Also, Carbo revealed that its clients had indicated that H2 2017 would see higher levels of CP consumption owing to initial use of frac sand in high stress formations having not worked out well, such as in the Utica.

There has also been more demand for CP in the SCOOP (South Central Oklahoma Oil Province) and STACK (Sooner Trend, Anadarko, Canadian and Kingfisher) plays of Oklahoma.

Overall, Carbo anticipates that its CP volume growth will likely be more modest as the focus on low cost completions is unlikely to change in the near term.

Imerys looking to “reboot at around $60/bbl”

Gilles Michel, Chairman and CEO of Imerys SA, in its Q1 2017 Earnings Call lamented the declining demand for its CP “which is at a very low level of consumption”.

However, in contrast to Carbo Ceramics, Michel appeared to be quite optimistic of a recovery for CP, particularly at an oil price around $60/bbl. “Once we reach those levels, then certainly, we will reboot this, because the profitability in these more costly operations will be warranted and will start again. We are convinced of this, we have evidence of this for over the last eight months in terms of the trend of that market.” said Michel.

Imerys, with its 2012 acquisition of Pyramax Ceramics’ brand new CP plant at Wrens, Georgia and development of a plant at its existing Andersonville, Georgia facility (C-E Minerals) in the same year, arrived somewhat late to the US proppants party, and is probably feeling the heat most from its relatively recent investments.

In 2015, Imerys idled the Andersonville plant and Wrens plant.

On the US proppant market, Michel referred to “a little bit of volume on sand-related proppants…these are the first explorations which start again when prices climb again.” While the latter is true, the former could be a little understated.