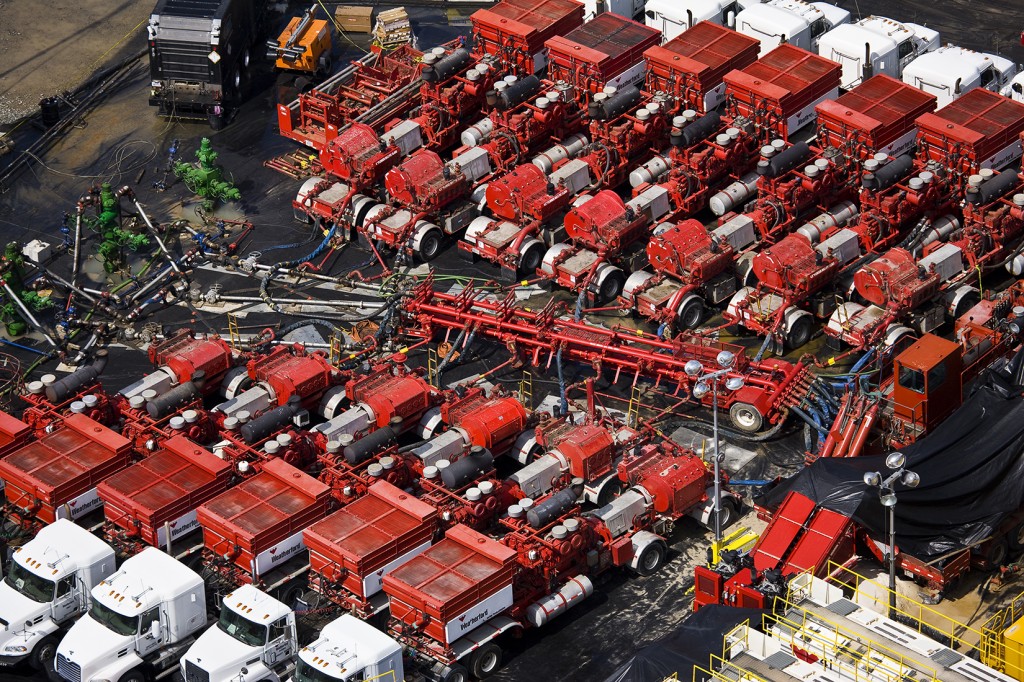 A fleet of Weatherford pump trucks attends to a hydraulic fracturing pad in the Marcellus, Pennsylvania, soon to be part of the huge new OneStim joint venture between Weatherford and Schlumberger announced in March 2017.

As the year’s First Quarter reports start to roll in it is already clear that 2017 is going to turn out to be a marker in the recovery of the proppants industry of North America.

Frac sand producers and oilfield service companies alike are all pointing towards a ramping up of activity, proppant consumption, and revenues.

Some analysts forecast US proppant demand in 2017 is to exceed 2014 levels with sand volumes nearly doubling to 55m short tons, with the potential to rise by another 45% or more in 2018 to 80m tons (see Oilfield minerals market: Year of recovery).

US Silica is very bullish on frac sand demand outlook, and the frac sand leader estimates demand to be about 75m tons in 2017, growing to over 100m tons in 2018, with some estimates as high as 147m tons.

The accompanying chart shows how US frac sand demand has risen since 2006 from 4.2m tonnes to its peak of 81.7m tonnes in 2014, according to US Geological Survey data.

Against this is shown the average yearly rig count, dropping during the global financial crisis in 2008-09, and more dramatically with the onset of the oil price crisis in 2014-2016.

Interestingly, the number of horizontal wells drilled has consistently grown over the period to dominate oilfield drilling in the USA, reflecting the increasing activity in hydraulic fracturing and also showing its robustness in the downturn. 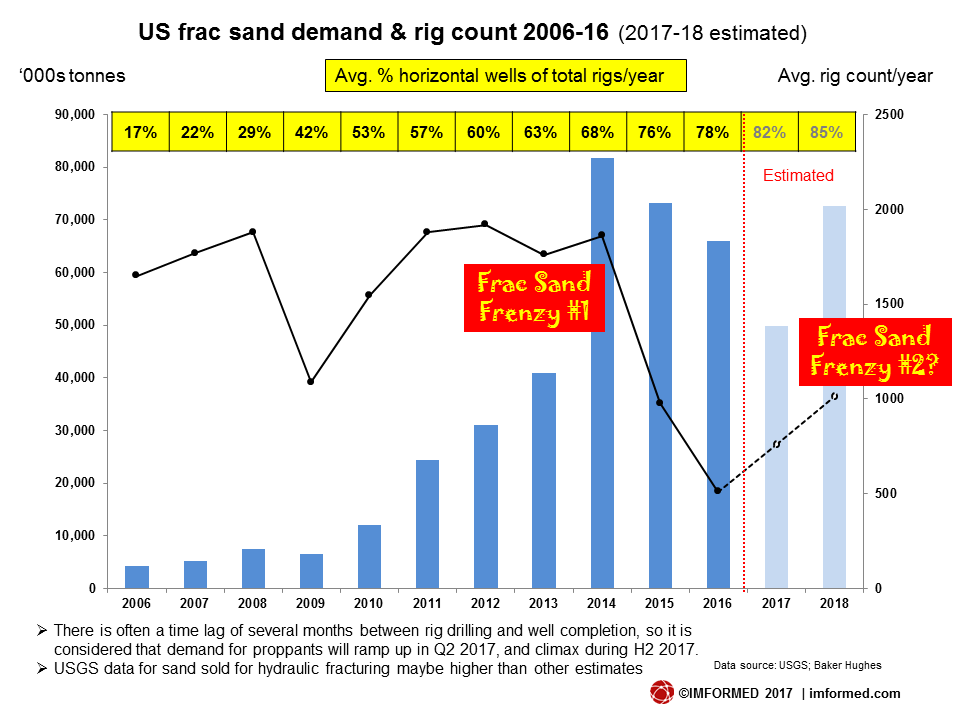 Bryan Shinn, President and Chief Executive Officer of US Silica said: “Continued industry recovery and powerful secular trends are driving record demand for our products and services in Oil and Gas.”

“We expect substantially higher sand demand in the second quarter and for the rest of 2017. The market will continue to remain tight for the foreseeable future. It’s a great time to be the market leader in the sand business today.” said Shinn.

Paal Kibsgaard, Chairman and Chief Executive Officer, Schlumberger, the leading oilfield services company, in his Q1 conference call on 21 April commented: “The only region in the world showing clear signs of increased E&P investments in 2017 is North America land, where activity has been growing for the last few quarters.”

Schlumberger reported that the North America land market continued to strengthen during the first quarter in terms of both activity and pricing, leading the company to start full-scale deployment of idle capacity for most product lines. 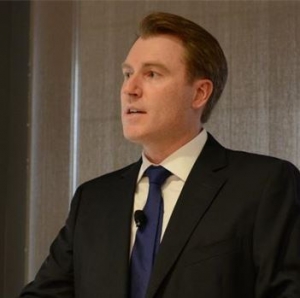 “Recovery will clearly be led by North America land, where investment levels are expected to increase by 50% in 2017.” Paal Kibsgaard, Chairman and Chief Executive Officer, Schlumberger.

Kibsgaard said that recovery will clearly be led by North America land, where investment levels are expected to increase by 50% in 2017, leading to a strong increase in activity and an overdue correction to service and product pricing.

Although, one item was perhaps not to most proppant suppliers’ tastes: “With proppant prices and distribution costs now starting to rapidly increase, we are also expecting to see a recovery in the use of our HiWAY technology, which reduces proppant use by 40% and water use by 25%.” said Kibsgaard.

Either by good luck or shrewd strategizing, the oilfield major has somewhat acted in advance in reinforcing its hydraulic fracturing assets at a time when the market is taking off.

On 24 March Schlumberger and Weatherford announced an agreement to create OneStimSM, a 70:30 joint venture to deliver completions products and services for the development of unconventional resource plays in the USA and Canada land markets.

Under the terms of the formation agreement, which is expected close later this year, Schlumberger and Weatherford will contribute all their respective North America land hydraulic fracturing pressure pumping assets, multistage completions, and pump-down perforating businesses.

Schlumberger has made significant investments in recent years to its hydraulic fracturing and completions business, including the development of a fully automated surface delivery system, acquiring its own frac sand operation (Wisconsin Proppants LLC, mine and plant, near Hixton, Wisconsin) and an associated vertically integrated distribution system.

However, the company is keen to stress that total vertical integration is not its aim. During the Q1 conference call Schorn explained: “We basically started this vertical integration investment program towards the back end of 2014. And we have made a number of investments in sand mines, which are now starting to come on production.

“And in addition to that, we obviously also invested further into owning railcars, owning transloading facilities. And we have now established our own trucking fleet. But just to be clear, we are not looking to fully vertically integrate.”

“We are still going to rely on the long-term suppliers that we’ve had both in upturn as well as in future downturns. So it’s going to be a balancing between vertical integration, 100% owned by us, as well as using the supply chain capabilities that we have in the open market.”

In frac sand, logistics is king

If not vertical integration, the name of the game with the frac sand market is certainly logistics – a factor not only picked up by Schlumberger but by most of the leading US frac sand producers some time ago.

Investing in facilities to utilise unit trains to shift large volumes of frac sand from mine to well head is reported to save $7-8/ton in logistics cost. Perhaps unsurprisingly the recent market flush has sparked another round of logistical reinforcements. 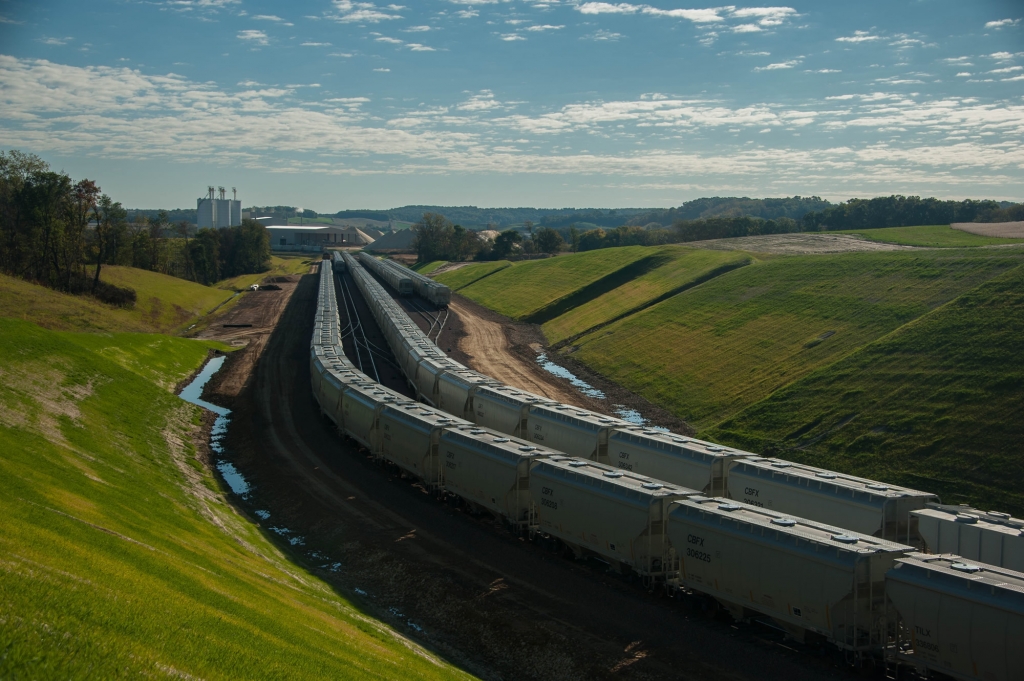 Rail car trains at Hi-Crush’s Whitehall, Wisconsin plant, with 2.8m tpa production capacity of 20/100 frac sand. Located on a mainline of the North American rail network of the Canadian National, with an on-site rail yard that contains approximately 30,000ft of track and storage capacity for approximately 500 rail cars. Courtesy Hi-Crush

Badger Mining Corp. recently completed work on a 4,500ft expansion project on a rail siding near its Taylor, Wisconsin facilities, allowing the site to now hold up to three >100 railcar unit trains concurrently.

Smart Sand Inc. has just announced plans to expand its rail siding and transload facility on the Union Pacific network in Byron Township, Wisconsin to allow unit train shipments from this facility. The expansion is expected to be completed in approximately six months.

A new terminal is being built in Pecos county, Texas, due for completion in October 2017, and will be well placed for the surge in demand for frac sand in the Permian Basin (see Oilfield minerals market: Year of recovery). 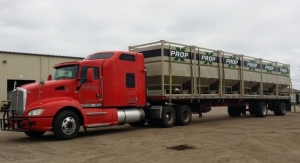 But the company has done much more with frac sand logistics.

At the same time, Hi-Crush formed with other partners and initial funding, Proppant Express Investments LLC (PropX), established to develop critical “last-mile” logistics equipment for the proppant industry, such as manufacturing the containers, or pods, and the PropBeast conveyor system.

Hi-Crush has committed to invest up to $17.4m in PropX for the manufacturing of PropX pods and PropBeast conveyor systems.