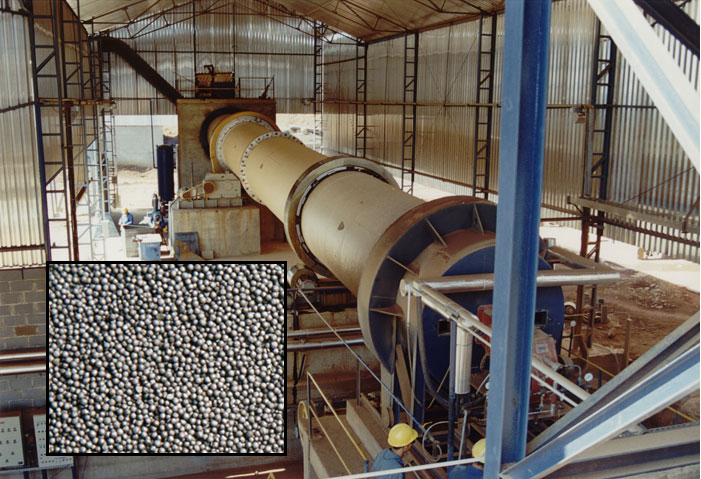 Demand for calcined bauxite – such as that produced by Mineracao Curimbaba in Brazil (pictured) – in the manufacture of ceramic proppants is expected to grow by more than 5%py out to 2021, according Roskill.

Demand for calcined bauxite in production of ceramic proppants is expected to grow by more than 5%py out to 2021 as North America and China target greater exploitation of unconventional oil and gas reservoirs, according to Roskill’s new Non-Metallurgical Bauxite & Alumina report.

Within only a decade, hydraulic fracturing has proved to be the key to unlocking vast resources contained in oil and gas shales, led by the USA. Hydraulic fracturing or ‘fracking’ is done to enhance permeability and increase flow to oil and natural gas production wells.

This has led to a booming demand for fracturing (frac) sands, used during fracking to prop open the fractures in reservoir rocks. In the USA, domestic frac sand demand leapt from 1.5Mt in 2002 to 54Mt in 2014, but subsequently fell to an estimated 45Mt in 2015.

The sudden drop in oil prices from US$105/bbl in June 2014 to below US$45/bbl by the end of January 2015 led to a drop in the US rig count of 17% over the period. Consumption of all proppants is estimated to have fallen by some 20% in 2015, but this was more pronounced in the higher-cost ceramic proppants sector.

Most proppants are based on natural, rounded quartz sands, but approximately 10% of the market comprises ceramic proppants manufactured mainly from kaolin and/or bauxite. Ceramic proppants have a better crush strength than natural sand proppants and are more suitable for high-pressure drilling situations.

Ceramic proppant consumption is likely to remain subdued in 2016, but from 2018 onwards demand is expected to increase; notably in North America and China where unconventional gas fields are currently being developed – such as the Sulige tight sandstone gas field in Inner Mongolia.

Non-metallurgical bauxite and alumina markets are significant industries in their own right, but are often discussed within the context of the much larger aluminium feedstocks sector. This is despite non-metallurgical grades typically being much more tailored and higher-cost products.

Non-metallurgical aluminas are increasingly serving hi-tech, specialist applications; one of the fastest growing markets since 2011 has been aluminosilicate glass, which has high loadings of calcined alumina. Aluminosilicate glass demand has grown swiftly owing to its use as the substrate for Thin Film Transistors (TFTs) in liquid crystal display (LCD) panels.

One of the main trends in LCD panels has been increasing screen sizes for LCD televisions. The average TV screen size was around 37 inches in 2013 but this is forecast to grow to 40” by 2016, because of increasing shipments of >50” TV screens.

Other glass sectors, such as solar glass for photovoltaic (PV) cells, are niche but emerging markets for speciality calcined aluminas. Despite a slowdown in PV cell installation rates after the 2009 economic downturn, there was strong recovery in 2014 and 2015 – contributing to a global installation growth rate of over 40%py since 2010.

The use of ultra high-purity aluminas in production of synthetic sapphires is also on the rise. The bulk of the sapphire substrate market is for LED lighting and the trend is towards higher luminous flux and larger diameter wafers. There are also promising growth prospects in non-LED applications. Smartphone manufacturer Apple used sapphire as a cover material for the camera lens and touch ID sensor in later models of its iPhone. The company also used sapphire in the display screens for some models of the Apple Watch.

There is also good demand for calcined alumina in a variety of ceramics components, including the higher value structural and functional ceramic products. Markets that are likely to offer the best demand growth rates include catalytic substrates, electronic ceramics (substrates, pressure sensors) and spark plugs.

While hi-tech sectors offer exciting prospects for higher purity calcined aluminas, these are specialist and lower volume markets compared to traditional applications. Nearly 60% of total calcined alumina consumption was for the production of refractories in 2015 – including material used indirectly via spinels and refractory ceramic fibres.

In 2015, Chinese crude steel production fell for the first time in modern memory, from 822Mt in 2014 to 803.8Mt. While Chinese steel output is expected to contract further in the period out to 2021 – causing a similar decline in refractory use – refractory bauxite and alumina demand is forecast to buck the trend as end users call for higher quality products.

Elsewhere, non-metallurgical aluminas have benefitted from tighter regulations in flame retardant applications. The use of speciality aluminium hydroxide (ATH) in flame retardants has grown strongly since 2011 and accounted for nearly 15% of the total market in 2015.

ATH is now the major mineral primary flame retardant in use and has gained a strong market position compared to its main rival, synthetic magnesium hydroxide. The flame retardants market is now the second largest application for ATH globally, although it uses much lower volumes than the aluminium chemicals industry.

Speciality ATH may be at risk of supply tightness if there is no new production capacity added between 2016 and 2021, and if flame retardant and filler markets grow as projected.

Overall, demand for non-metallurgical alumina (including calcined and ATH grades) is projected to grow in excess of global GDP in the period out to 2021. Non-metallurgical bauxite demand is likely to grow at slightly under GDP as its use in some applications – such as Portland cement, slag adjusters and chemicals – could remain stable or contract slightly. The main highlights are likely to be the ceramic proppants and mineral wool sectors.