Blue Pacific Minerals Ltd, New Zealand, is looking to sell its perlite extraction and processing division as it focuses on its zeolite business.

There are very few companies in the world producing this unique industrial mineral, with just China and New Zealand as the key country sources in the Asia-Pacific region. Greece, Turkey and the USA are the primary sources after China.

World trade in perlite, which finds important applications in a wide range of low to high value markets including horticulture, insulation, construction, and fillers (see chart), is dominated by exports from Greece and Turkey, while the US and China consumes most of its own production (see charts).

BPM produces some 100,000 tpa of zeolite ore from its two mines in central North Island which is used in absorbents, agriculture, feed/toxin-binding, and soil conditioning and exported to Australia, North Africa, Europe, UK, and South East Asia.

BPM has thus decided to seek international expressions of interest and divest the business assets associated with its Perlite Division, which include: 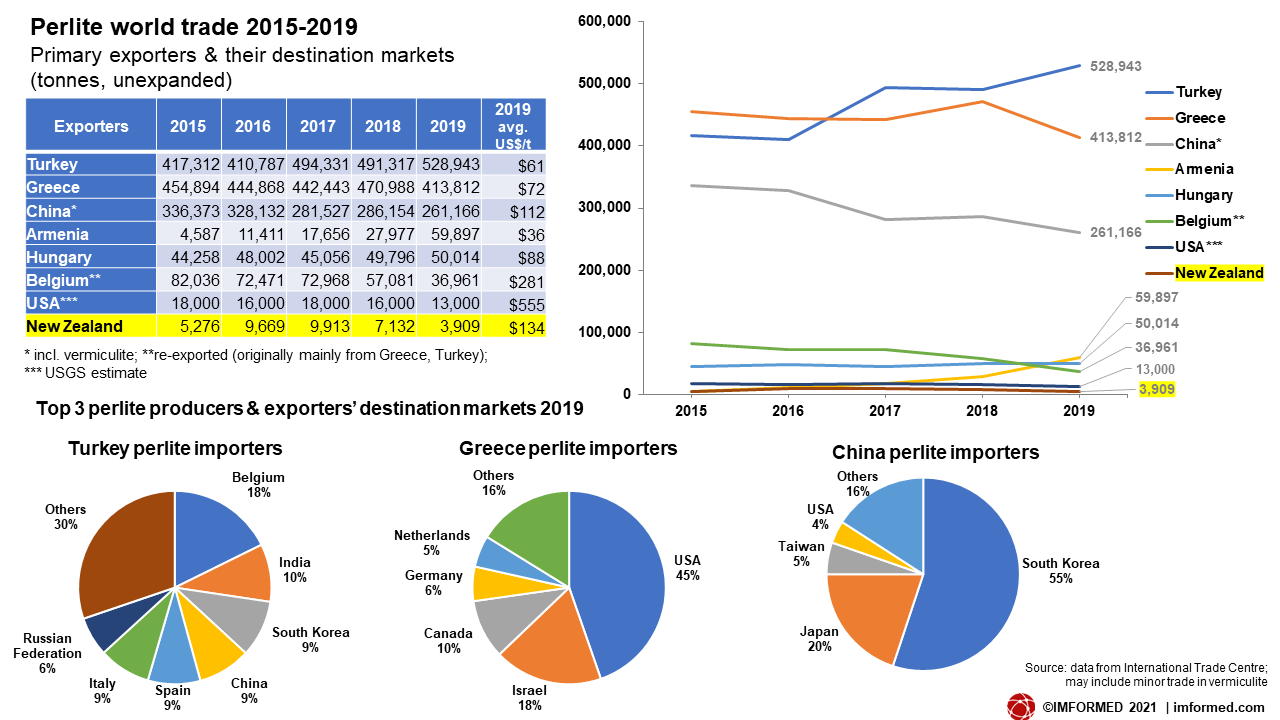 Since the early 2000s, BPM has been extracting, processing and exporting high quality perlite ore and has established best practice perlite manufacturing processes as well as growing an international customer base for high value perlite products. 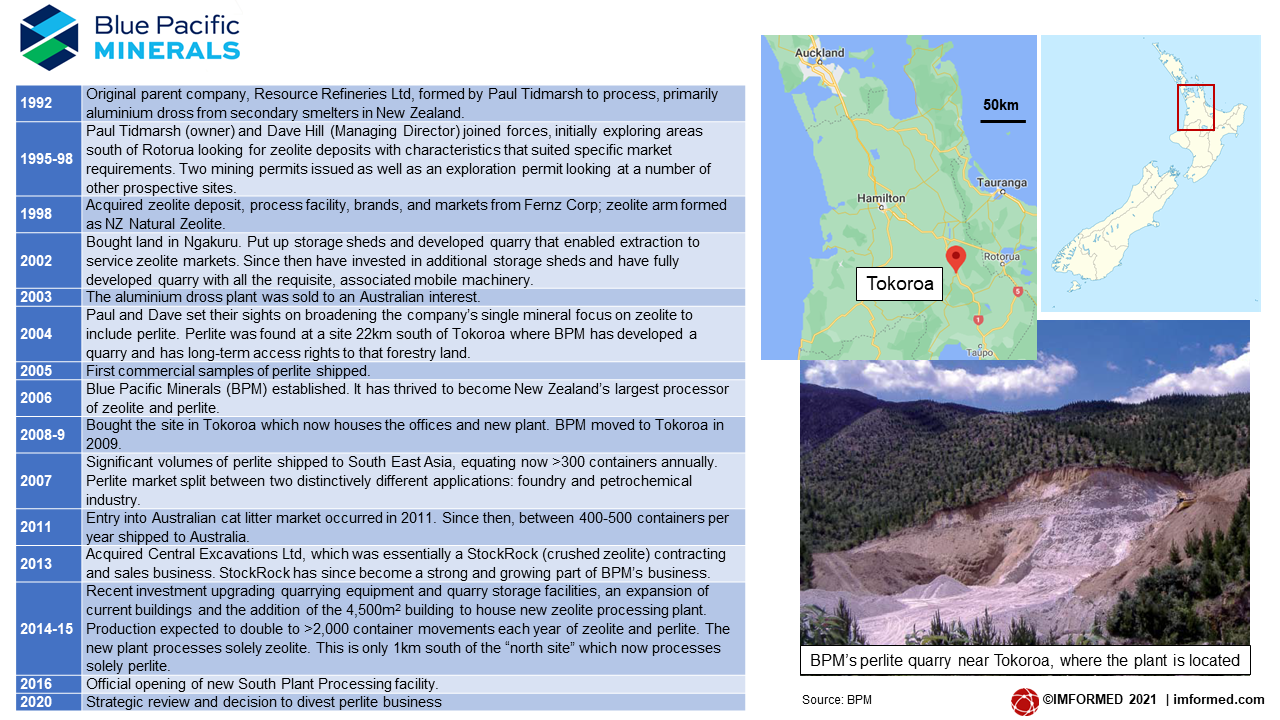 Hill commented: “A New Zealand-based mineral businesses needs to be ‘multi-mineral’ given the capital invested and the slow build of market demand, especially for a zeolite/non-commodity type offering. This is until markets build and minerals can stand on their own feet – which is what we have now. We had existing plant and equipment that suited perlite ore processing in place and access to very good perlite ore locally. Markets, LNG projects typically, were eager for us to supply them”.

The mine is situated on 15 hectares of private forestry land managed by a third party management company. The operation has been on a care and maintenance basis since late 2019.

BPM has a Mining Licence Agreement with the landowner which permits access and mine operation to a maximum of 50,000 tpa of perlite ore; recent years have seen approximately 10,000 tpa ore extraction rates on a periodic basis.

While no exploration drilling has been undertaken to date, a field-based evaluation of the perlite deposit by independent engineering consultants Sinclair Knight Merz Ltd in 2006 (updated in 2007), as well as further on-site excavation by BPM, estimate that the mine area has inferred reserves of approximately 2.5-3.0m tonnes perlite.

BPM believes it is likely that proven reserves would be significantly greater than 3.0m tonnes if a formal drilling programme was undertaken.

The minerals associated with the Quarry are classified as private minerals, as such, a formal Crown Mining Permit is not required, nor is a Crown royalty payable upon the extraction of the perlite resource.

The Sinclair Knight Merz report concluded that: “The Quarry appears to contain a deposit of some of the highest quality perlite the author has seen. Based on the field assessment, the resource quality should persist throughout the perlite deposit.”

The excellent 30x expansion ratio property of BPM perlite (see chart below) was objectively and independently tested to be compared favourably with leading brand reference samples.

Dave Hill commented: “No selective mining other than owing to some very minor obsidian. The deposit is relatively clean and contamination is only obsidian in very small, but visible seams.” 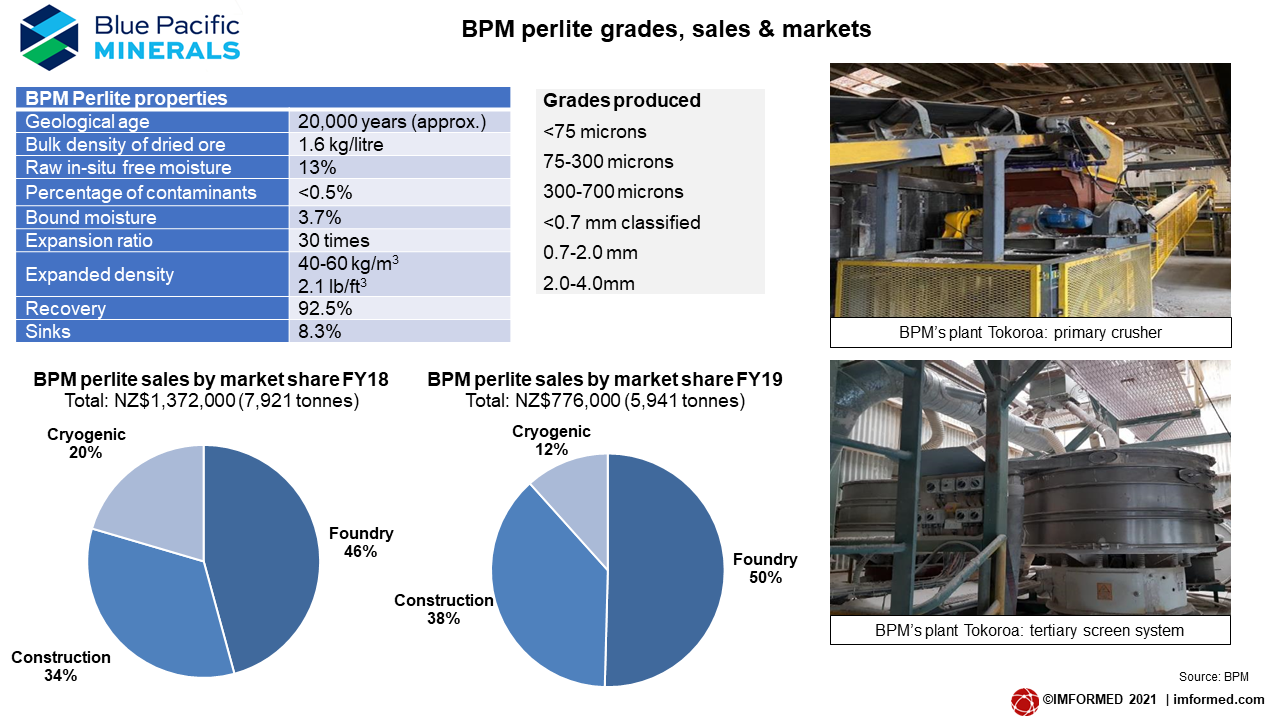 BPM has historically used a combination of its own equipment (excavators and loaders) and that of local contractors to operate the mine (the proposed sale excludes this equipment). All transport from the mine to the Tokoroa processing plant is by a local road transport contractor.

On site is a sea-freight container loading bay and road B train access/egress, suitable for a 20-30,000 tpa operation. There is covered bulk perlite ore storage of up to 500 tonnes.

Recent plant upgrades include a complete kiln (for drying) upgrade in 2013, and a full electrical distribution board upgrade in 2012.

Clearly, the foundry/steelmaking sector is BPM’s largest market consumer by sale value. Geographically, BPM supplies 65% to Australia and 35% to Asia-Pacific, by value.

The accompanying charts illustrate BPM sales by market share in 2018 and 2019. Owing to BPM winding down its Perlite Division in late 2019, BPM maintains that FY19 performance is not reflective of true operating performance.

Indeed, BPM reports that in FY17 it sold 10,388 tonnes of perlite valued at NZ$1.5m. In FY18, a sales and revenue decline (NZ$1.37m, 7,921 tonnes) was driven by a fall in LNG capital investment in the Asia-Pacific region, as well as an associated stock/product mix devaluation.

BPM has also identified an opportunity for fine graded perlite <75 microns, a purpose-classified product of the primary manufacturing process, for use as a natural pozzolan additive to cement materials, ie. as a supplementary cementing material (SCM).

Perlite supplied by BPM has a significant amount of amorphous Si-O-Si and Al-O-Al, this is a prerequisite to be used as a pozzolanic material. 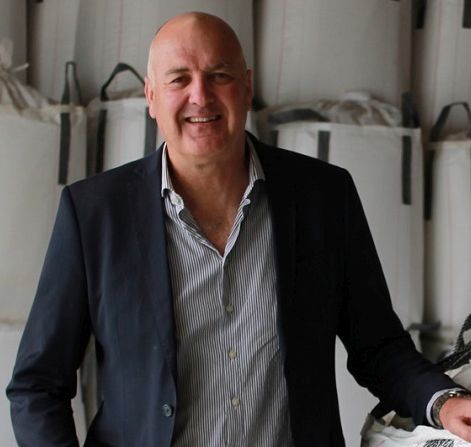 The results also confirmed that the pozzolanic reaction happened in less than 7 days. If the perlite material is used correctly, it will react within a week, rather than needing to wait up to 56 days for the reaction to occur, as is the case with some other pozzolans. This has the advantage that the concrete will be close to designed strength sooner.

Fly ash derived from coal-fired power stations is a primary source of pozzolanic material. However, with the impending demise of these fossil-fuelled energy sources, fly ash supply is expected to diminish and other alternative materials will be sought.

Perlite: an expanding mineral in a shrinking world

Perlite occurs worldwide in young, glassy, rhyolitic high-silica volcanic rocks. Its unique key feature, when kiln-heated rapidly expanding by up to 20 to 30 times its original bulk density, has been known for almost 2,000 years. But modern commercial production only started in 1949, in Superior, Arizona, USA.

While crude perlite ore has industrial uses, the expanded, or “popped” perlite is the widely commercially traded grade, and has excellent insulating properties, is lightweight, and maybe coated, making it suitable for a wide range of industrial applications (see chart below). 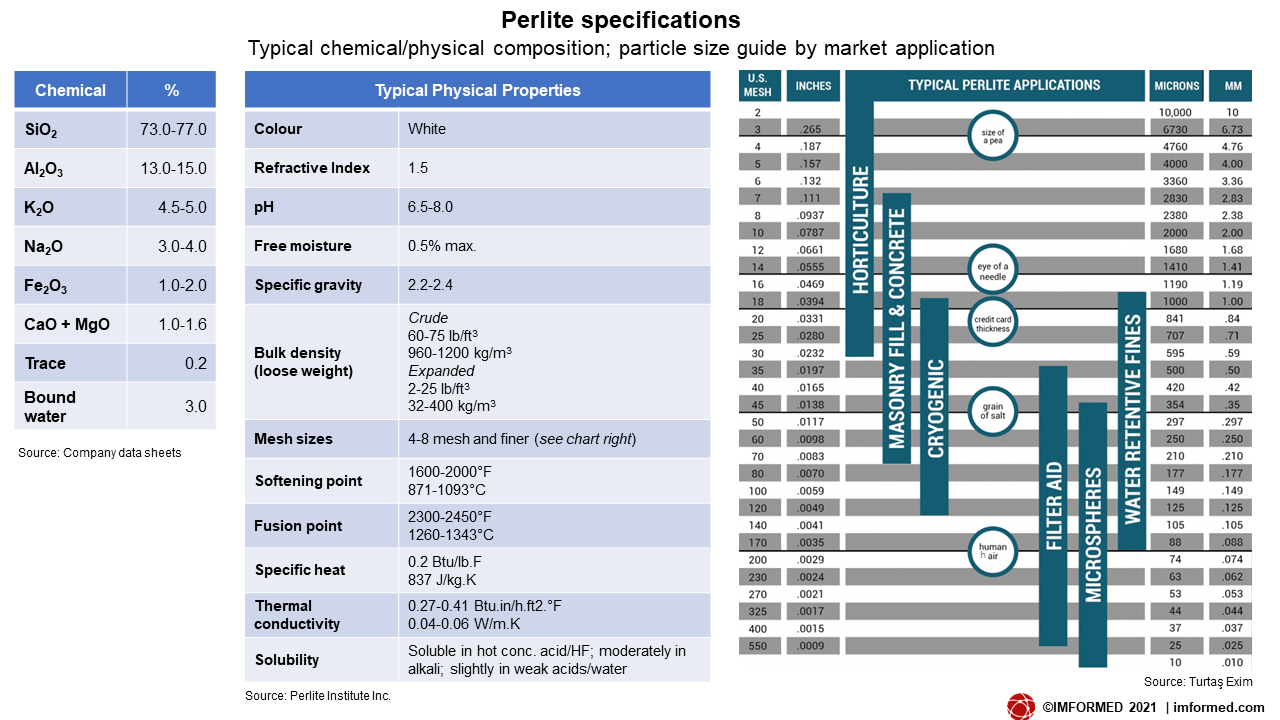 As such, the key properties important to perlite ore for its commercial development are those associated with its expansion on heating to 600-900°C. These include its loose weight or expanded density (<3.0lb/ft³ desirable), furnace yield (90% min.), and sinks percentage (impurities falling to the furnace bottom during expansion, which can include quartz, feldspar, biotite, and magnetite; 5% max. generally).

Other useful attributes include high brightness (70% optimal; good in wallboard) and the relatively rare “onionskin” texture perlite (most ore is granular texture) which is sought after for high value filtration grades. 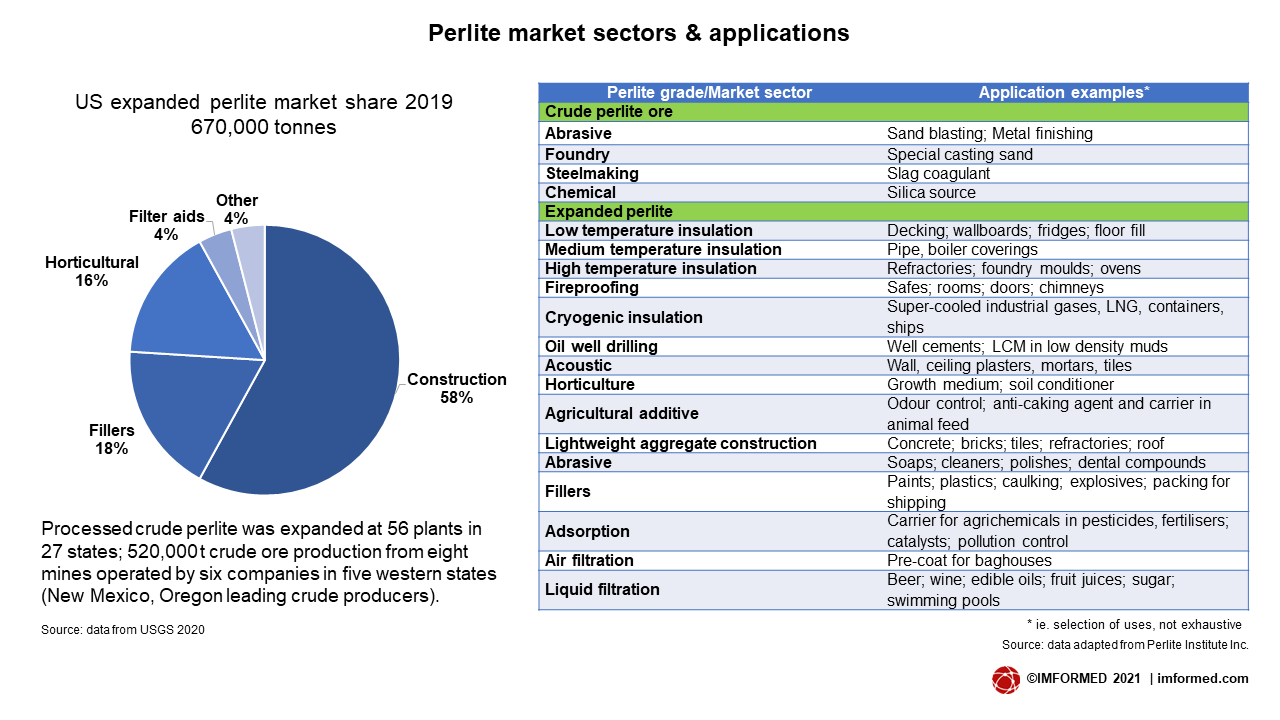 The main large volume markets are in construction, horticulture, and fillers, which tend to follow the GDP trend and economies of countries. Demand growth is clearly linked to growing urbanisation and thus India, Indonesia, Vietnam and China are prime markets.

However, novel and small markets for perlite have also increased during the past ten years in cosmetics, environmental remediation, personal care products, and – where it is permitted – marijuana cultivation (eg. now legal in 18 states in USA).

As with all industrial minerals, economic logistics is key to success, but for perlite it is imperative. Owing to demand for expanded perlite (ie. shipments of low weight, high mass), and that perlite sources are usually remote, the industry is structured in that perlite miners generally process crude ore to desired sizes before shipping to perlite expansion facilities close to the end markets.

The resultant industry structure is essentially one of few perlite miners (producers) and many perlite expanders (processors).

As can be seen from the charts, the leading country producers are China, Turkey, Greece and the USA, though China and the USA consume most of their perlite, while Turkey and Greece mainly export.

New Zealand features in the lower scale production tier, along with Armenia, Hungary, Mexico. But apart from China, New Zealand is well placed to serve Asia-Pacific markets. Indeed, BPM reports that competition in the region is mostly from Turkish and Greek perlite (although most Greek perlite appears to be exported West), with little if any from China.

Although the main player, BPM does not have a monopoly on New Zealand perlite: there is some production (with expansion facility) from INPRO (Industrial Processors Ltd), with 10,000 tpa perlite processing capacity at its Atiamuri mine also in central North Island (affiliated with Australian Perlite Pty Ltd (Ausperl); incorporated in 2006 to take control of the perlite and vermiculite processing business previously operated by FERNZ, New Zealand and then ORICA in Australia).

Elsewhere, the perlite supply sector has contracted further in recent years owing to a spate of consolidation.

There has been little news of development of new or existing perlite sources. In Armenia, a new 66 hectare perlite mine was approved to start in 2018 by Hidden Gold LLC at the Aragats mining area, famous for perlite, in Aragatsotn province. This may have come to fruition, perhaps reflected in the uptick in Armenian production and exports (mainly to Russia, Ukraine) since that year.

Interestingly, in 1998, Dicalite acquired a major stake in perlite production from Armenia, including the right to extract >1m tpa of crude perlite and to export 24m tonnes of perlite during its 22-year licence period – which would have concluded in 2020. What development took place, if any, is not clear. Meanwhile, until recently, leading Armenian producer Aragats Perlite OJSC listed Dicalite as its main customer.

Interest in BPM’s perlite may well emerge from one or two of the main multi-national group players – Imerys is a likely contender, and is already active in New Zealand in producing high value halloysite clay at Kerikeri, at the northern tip of North Island.

But there are also many perlite end users – in construction, horticulture cat litter, paper – operating their own perlite expansion plants, which may also favour securing raw material supply from one of the few independent sources available to buy. Watch this space!

If you enjoyed reading this article… 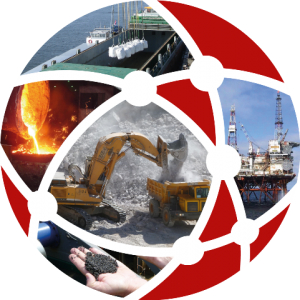 Like the idea of an objective, well-written and researched article about your company or products?

Perhaps you are pursuing new markets, launching new products and innovations, or just need some profile as you recharge or emerge onto the market?