The world’s second source of the special clay mineral hectorite came on-stream at the end of 2014 and shipped its first order of drilling grade product early 2015. 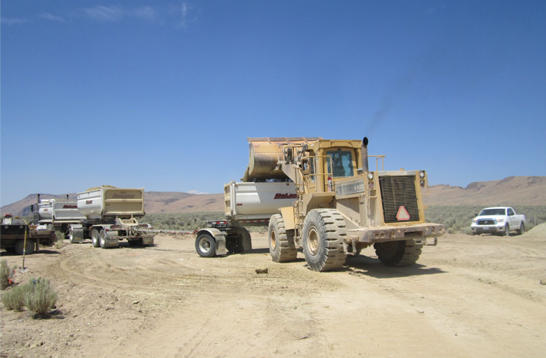 Lithium-rich hectorite mined by Hectatone at the Kings Valley deposit, Nevada. Until now, the world’s only commercially developed source of hectorite was the long-established mine at Newberry Springs, California. Courtesy Western Lithium Corp.

On 2 January 2015, Hectatone shipped its first order made to specifications requested by Western Lithium’s Houston-based distributor Raw Materials Corp. Production based samples have now been sent to other potential customers that have expressed an interest in the product.

The montmorillonite-based product is an organophillic viscosifier used in the drilling industry as an efficient and economical product for viscosity control, emulsion stability, fluid loss and solids suspension in oil-based drilling fluids.

Frank B. Wright Jr., President of Hectatone™ stated: “Now that the plant is operational, we plan to manufacture other Hectatone™ products in the weeks and months ahead as potential customers begin to recognise Hectatone™ as a reliable supplier with a state-of-the-art facility, high performance competitive products, and service that is focused on the drilling industry.”

Frank Wright will be presenting on the use and demand for hectorite in the oilfield market at Oilfield Minerals & Markets Forum Houston 2015, 27-29 May 2015 – organised by IMFORMED, the new source of networking and knowledge for the global industrial minerals business.

Until now, the world’s only commercially developed source of hectorite was the long-established mine at Newberry Springs, California, operated by Elementis Specialty Products. 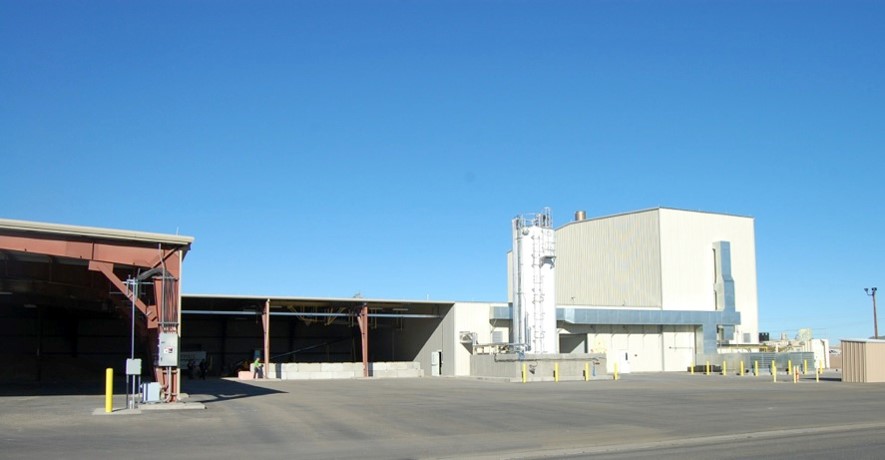 The plant had a gradual ramp-up in production during December to make the January shipment. Additional plant modifications are to follow during the year. Courtesy Western Lithium Corp.

By 5 December 2014, Hectatone had completed all safety inspections at the Fernley organoclay plant and received its Business License on 2 December 2014, which enabled operations to commence.

The plant had a gradual ramp-up in production during December to make the January shipment. Additional plant modifications and operational procedural improvements are expected over the coming months to meet nameplate capacity. The plant is currently operating with a crew for one shift.

Hectatone has obtained a commitment for the sale of its initial Hectatone product run, as well as strong expressions of interest for the purchase of Hectatone™ products from potential customers with a view to meeting full capacity production.

The new organoclay product is aimed at providing solutions for the directional drilling industry which in recent years has evolved rapidly with the boom in hydraulic fracturing treatments.

The new product is designed to improve drilling performance and competitiveness through a variety of metrics including improved rate of penetration and the drilling of longer laterals. Hectatone is targeting the growing high pressure, high temperature (HPHT) market. 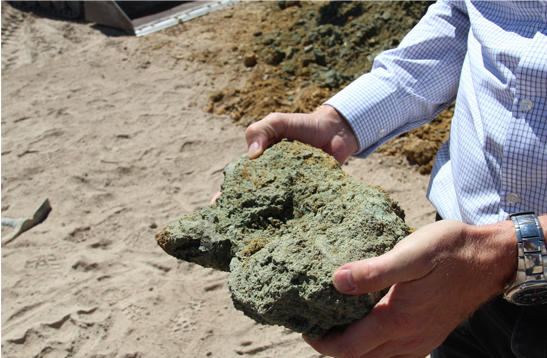 The special clay mineral hectorite is a white, greasy clay mineral belonging to the smectite group of clays, and used in a broad spectrum of markets from cosmetics to drilling fluid additives. Courtesy Western Lithium Corp.

With an unusually high active clay content of up to 94%, the hectorite clay-based Hectatone™ is dry processed, unlike more costly wet processed products.

The organoclay is designed to have specific rheological properties allowing for emulsion stability at temperatures above 204 °C, where bentonite-based organoclays begin to fail.

Organoclays are manufactured by applying a tallow-based quaternary amine and soda ash within the interstitial sites of clay platelets for speciality clays such as bentonite, attapulgite, and hectorite.

Organoclay is produced through a series of wet and dry processes using various formulations that require milling, extrusion, and drying techniques to manufacture.

The special clay mineral hectorite is a white, greasy clay mineral belonging to the smectite group of clays. Similar to bentonite clay, it has specific physical properties owing to its particle size, shape and charge that make it act as a rheological modifier.

This permits it to change the viscosity of a fluid and therefore influence its stability and strength.

Hectorite clays are used in a broad spectrum of markets from cosmetics to drilling fluid additives. More recently, hectorite clay products have been used by the directional drilling industry in HPHT environment, owing to hectorite’s inherent high temperature thermal stability.

Several Hectatone™ products are now under development to meet certain specifications for the drilling industry. Hectatone is currently testing and developing various products and expects to have up to six grades on the market.

According to Hectatone, such organoclays typically sell in a range of US$2,000-$4,500/short ton FOB shipping point, depending on properties.

The initial objective in developing the Kings Valley deposit was to exploit its lithium content into a strategic, scalable and reliable source of high quality lithium carbonate. Western Lithium is still pursuing this goal, and is anticipating demand from the increased use of hybrid/electric vehicles.

Frank Wright will be presenting on the use and demand for hectorite in the oilfield market at Oilfield Minerals & Markets Forum Houston 2015, 27-29 May 2015.

SAVE $US300 WITH EARLY BIRD RATE – BOOK NOW ONLINE REGISTRATION