…you served the industry well 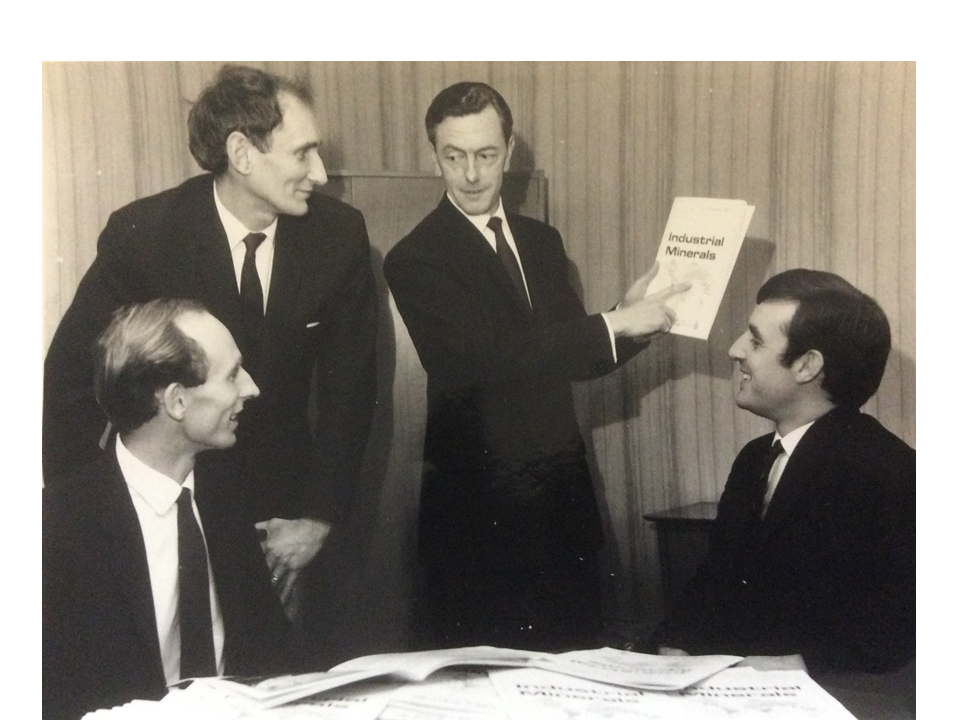 The end of an era for those in the mineral media world. The October-November 2019 issue of Industrial Minerals magazine marked its final edition.

An announcement in late October 2019 stated: “the printed version of Industrial Minerals will be merged into Fastmarkets’ Metal Market Magazine”.

This brings to a close 52 years of the monthly publication, and incidentally returns the periodical to its birthplace, or as near to it as possible. Industrial Minerals magazine (IM) was born out of the back pages of the twice-weekly Metal Bulletin in October 1967.

In a world where industrial minerals (ie. non-metallic, non-fuel minerals) were often branded the “Cinderella”, or unfairly, and inaccurately, the “Third World” of the mining industry, IM became a media beacon of light for a global mineral sector vital to the world’s economic development and growth. 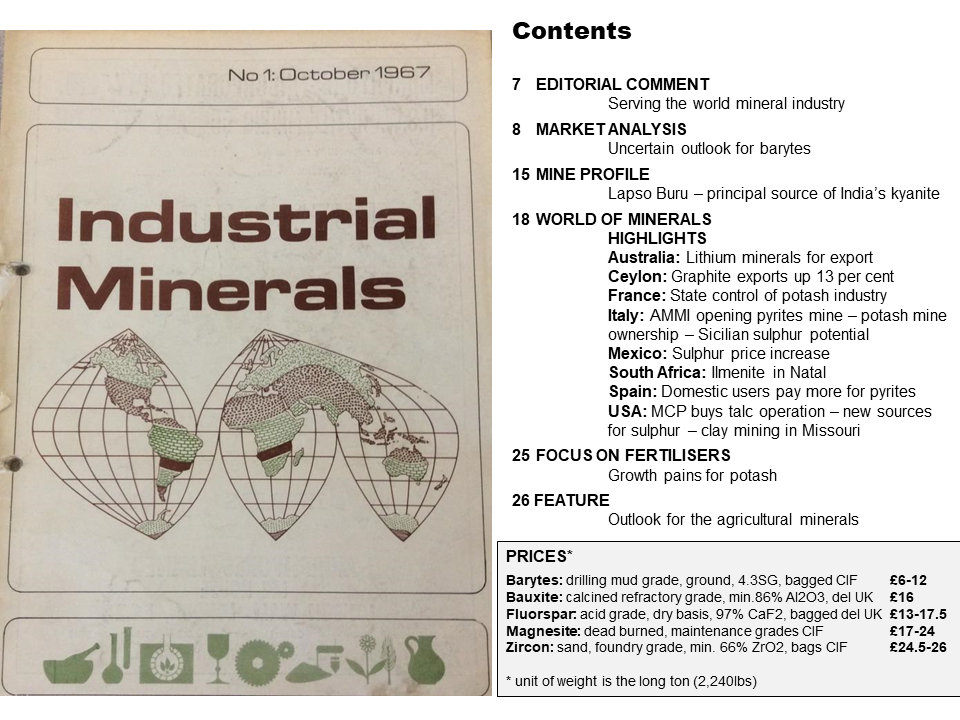 Metal Bulletin’s coverage in the late 1960s, in addition to metals, ores and steel, covered mineral sands trade (titanium and zircon minerals) and published an occasional column on non-metallic minerals.

Interviewed some years ago by then editor Mike O’Driscoll, Trevor Tarring MBE, ex-Chairman of Metal Bulletin plc, (then Metals Editor) recalled: “IM was actually conceived in 1962. In those days Metal Bulletin was very active covering the ups and downs of mineral sands prices as part of its ores coverage.

I remember my late father being very pleased that the Board had agreed to launch a new title to fan out from this base to cover all the non-metallic minerals. Unfortunately, not long after, he entered a terminal illness, so I was doubly busy and the IM project went on the back burner.

It was revived in 1966 for a 1967 launch. The leading question was, who would edit it? Luckily my then right hand man was Peter Rowbotham who jumped at the chance. The blueprint we gave him still had quite a strong focus on prices, in the Metal Bulletin mould. But Peter said ‘Facts, Trevor. That’s what they want, facts’. This has certainly proved a good recipe down the years.”

Keep up with the latest trends and outlook for industrial minerals, don’t miss… 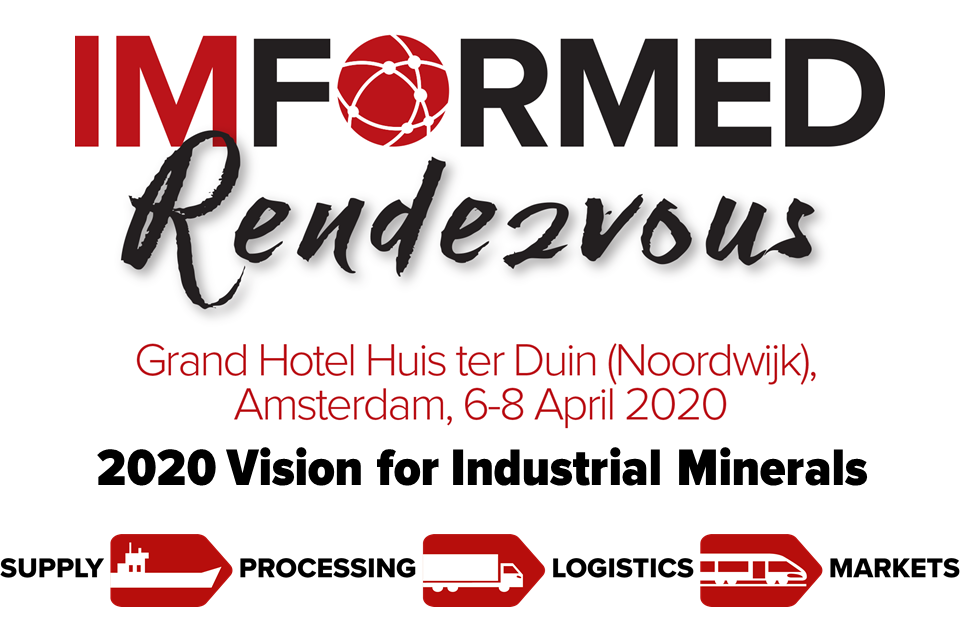 “Serving the world minerals industry” was the title of the inaugural issue’s Editorial Comment in October 1967.

In reviewing some of the extracts from that first leader by editor Peter Rowbotham, as well as boldly explaining the role and rationale of the then new title, he clearly indicated a sense of how industrial minerals were misperceived then (and sometimes still!) as somewhat second class “mineral citizens”.

“Minerals are very broadly divisible into fuels, metals, and ‘other’, and it is just as vital to identify, and if possible, anticipate developments in the ‘others’ – the industrial minerals – as it is for the fuels or metals.

The impression that has been fostered in the past by, amongst other things, the absence of a central trade paper for the industry, is a rag bag of unimportant commodities. While not yet quite the equal of the fuels or metallic minerals either in volume or value of production, the industrial minerals deserve far greater attention as a group hitherto.

Honest and unbiased comment on topics of major importance will be offered, claiming as our justification for so doing the role of the ‘onlooker who sees most of the game’. Uniquely, the emphasis will be on news of marketing significance.” 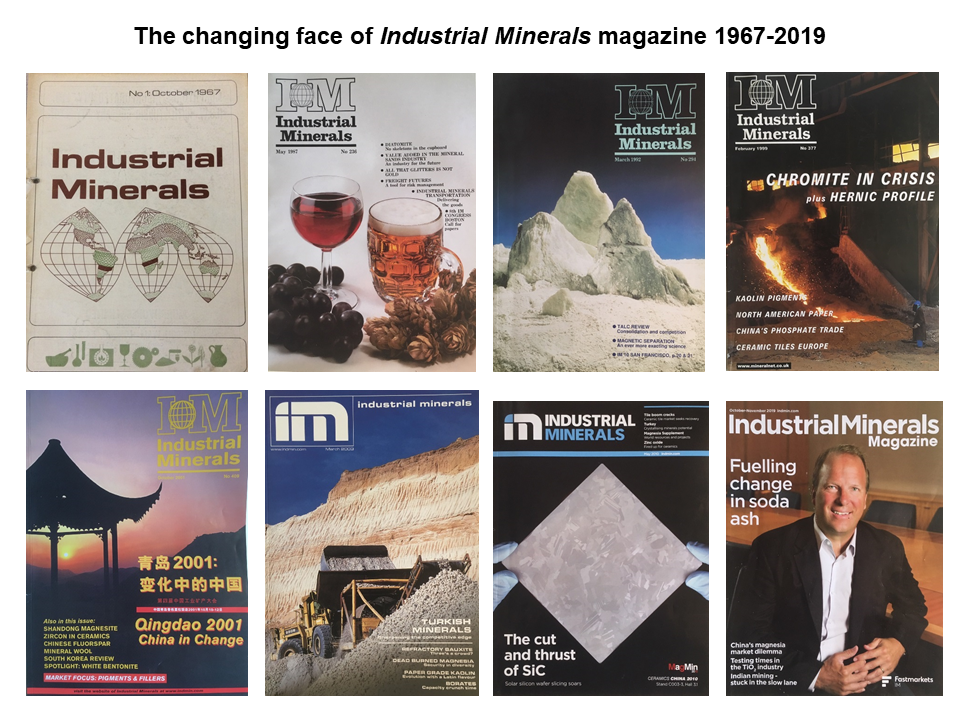 Certainly, IM grew to be the industry’s bible and voice piece for much of its time and attained a loyal following and matching high reputation.

And it was not only in publishing information where IM pioneered and prospered, but in successfully introducing industry conferences to the Metal Bulletin portfolio.

IM broke ground with the 1st Industrial Minerals International Congress, in London in 1974, which was soon followed by a range of mineral, market and regionally focused events, including the first Chinese Industrial Minerals Conference in Beijing in 1995 – recognising China’s increasing influence in world minerals trade. 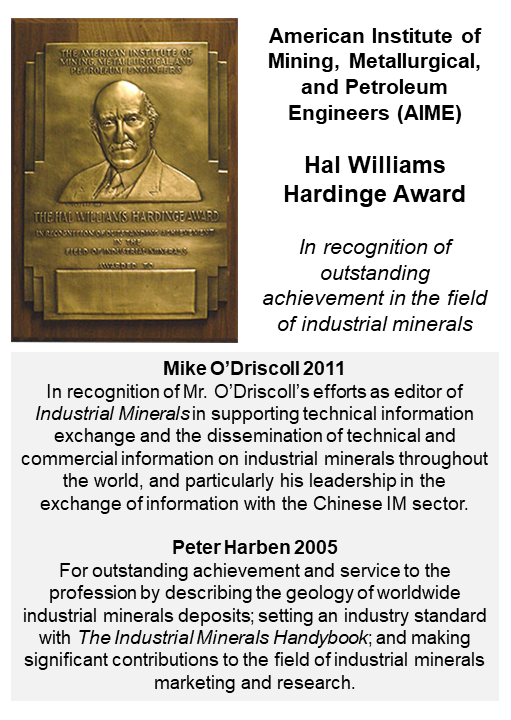 It was also IM Deputy Editor Peter Harben, who established a foothold in the North American market by founding Metal Bulletin’s first New York office in 1978, becoming IM’s first American Editor 1978-1985, as well as Vice President, Metal Bulletin Inc. before embarking on a highly successful career as the foremost consultant in industrial minerals markets and author of “The Industrial Minerals HandyBook”.

The world mining industry’s premier organisation, the American Institute of Mining, Metallurgical, and Petroleum Engineers (AIME; which oversees the Society of Mining, Metallurgy, & Exploration) has twice awarded to IM editorial staff its prestigious Hal Williams Hardinge Award, which since 1959 has recognised outstanding achievement which has benefited the field of industrial minerals: Peter Harben in 2005, and Mike O’Driscoll in 2011 (two of the only four British recipients of the award; the others are Ian Wilson 2009, and Colin Bristow 1993).

Mining a rich source of talent

Of course, none of the above could have been made possible without the unstinting efforts and skills of the magazine’s editorial staff, well supported by its advertising, marketing, conference, and production colleagues, going back through the years.

There were certainly some characters amid IM’s ranks, but across the board there was a common ambition to get the job done to the highest standards, while at the same time enjoying it immensely.

This evolved a special camaraderie which frequently fostered longevity in staff retention, thus nurturing experience, consistency in magazine quality, and above all, rapport with the industry. Over more than five decades of publication, there were just seven editors.

To all those that served on Industrial Minerals magazine, we salute you!

Keep up with the latest analysis, trends & forecasts in the industrial minerals business, don’t miss…