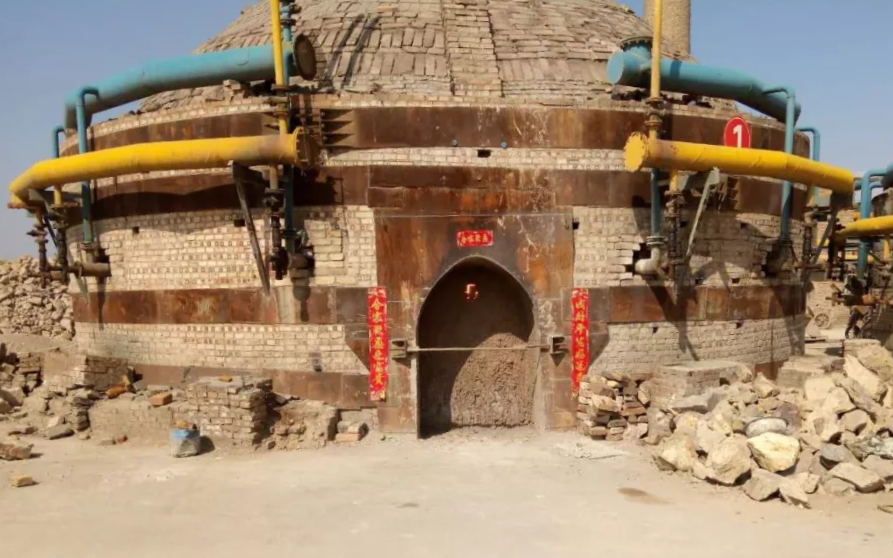 Lone survivor: one of 12 active downdraft bauxite kilns in the Jiexiu district of Shanxi province that is not subject to local government closures as in Xiaoyi, where a 3-month ban is in place.

In our last post on the subject of China’s refractory minerals squeeze (see Dog Days ahead for Chinese mineral consumers? Newsfile 13 February 2018) I postulated that perhaps by the end of the Chinese New Year of the Dog celebrations, in early March, or maybe by mid-year, the industry might be in a better position to assess China’s production capabilities in light of the dramatic upheaval initiated in 2017 (see China minerals meltdown Newsfile 17 October 2017).

It now seems that even a mid-year conclusion and regrouping might be too optimistic, and my longer term scenario more likely, ie. warning traders and consumers to brace themselves for a long haul of short supply and high prices through 2018 and into 2019.

Indeed, the upshot is that 2017 will be seen as a game changing year, nothing will be quite the same again with Chinese refractory mineral supply regarding production capabilities and trading patterns.

Two ideal and invaluable opportunities to learn the latest on China, refractory mineral supply, and meet the key contacts involved

It was during the IREFCON conference in early March (see Refractory raw material supply “the single most important challenge” Newsfile 28 March 2018) when news emerged of a halt to magnesia production in the Haicheng district, Liaoning instigated in response to a gas explosion at the Huaziyu plant of Haicheng Huayu Group.

The Haicheng government had issued an order that all magnesia plants using coal, gas and oil in their production must cease operations at once.

Compounding the situation that month was the sitting of the First Session of the 13th National People’s Congress during 5-20 March; such government events now automatically trigger a clampdown on distribution of explosives for mining.

It was understood that while dynamite provision for mining was unavailable in Haicheng and Anshan districts, it was available in Yingkou, Xiyuan, and Dandong districts. However, although magnesite mining continued in the latter districts, the ore is of lower quality and not good feedstock for the higher purity dead burned magnesia (DBM) and fused magnesia (FM) grades.

At the start of the year, the Haicheng government also issued ban on illegal mining of magnesite in the district, which includes the use of mechanical excavators as opposed to drill and blast techniques.

In response to the dynamite ban, some large scale miners adopted the use of excavators to extract magnesite ore, at apparently similar rates of recovery to blasting; smaller miners are unable to afford excavators. 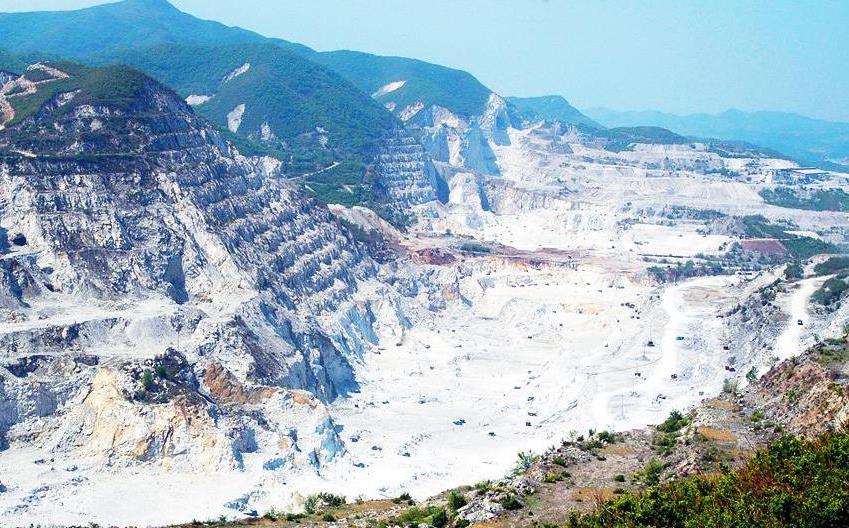 In March one source commented that he expected April to see a resumption of mining with explosives in Haicheng by a handful of companies, including Haicheng Huayu Group, Fengchi Refractories, and Haicheng Magnesite & Refractories General Factory.

Magnesite mining is understood to have completely stopped owing to no explosives, while some FM production has been maintained only by those with remaining feedstock ore; overall, the quality of Chinese FM production is deteriorating.

A magnesia trader summed it up rather neatly: “China being China, no one knows when the situation will change. The fact is, producers have revamped plants, put in measures to stop pollution, but are at their wits end as to what is their future. Whatever happens, it will never be back to pre-2017 days!”

Other feedback from Liaoning echoes these comments, with phrases such as “it’s complicated” and “it’s getting more strict”.

For any prospect of survival for magnesia producers in Liaoning, in addition to meeting government environmental regulations, they must invest in new and alternative processing methods, especially when faced with increasing lower grade feedstock ore.

At the recent Ceramitec 2018 exhibition in Munich, where the situation was much debated, IMFORMED was told of at least five magnesia flotation plants being built in China in order to upgrade magnesite ore.

Some of the primary bauxite and brown fused alumina (BFA) production centres in Shanxi and Henan are also suffering another bout of stoppages, although the disruption is not province-wide as has been reported elsewhere.

Most bauxite mining and calcination in the Xiaoyi district of Shanxi province has now ceased, after a brief resumption from the earlier 2017 closures, until the MEP’s regulations are satisfied. It is thought that production may resume at the end of May.

Although March saw the end of winter season inspections in Shanxi, another round of inspections has been initiated by local governments focusing on regulated operation, safety and environment friendly production.

According to local producers, “It will be a longer, harder time than expected”. Rotary kilns ceased activity from 16 April in Xiaoyi and surrounding areas.

The MEP’s attention had initially been drawn to a chemical producer in the Xiaoyi area, caught with illegal discharging of untreated waste. All other industries emitting pollution have since been ordered to stop production, this not only includes bauxite calcination but also processing in the Xiaoyi area.

The Yangquan and Jiexiu districts of Shanxi, important bauxite sources, are reported to have no such bauxite plant bans in place, although they are suffering ore supply restrictions.

Bauxite ore mining in Shanxi province has been under severe restrictions since 1 March 2018, when the government implemented a special action aimed at illegal mining in Xiaoyi.

A three-month campaign to crack down on large-scale illegal mining operations has been instigated, including: unlicensed exploration and exploitation, cross-border violations, and illegal mining under various names. It is reported that bauxite production in the Xiaoyi area will be suspended for at least three months.

At the end of April, IMFORMED was notified that only one bauxite mine in the Xiaoyi area was still active “but at very low output”.

The overall result is that suppliers can now only sell what they have in their limited and fast dwindling stocks.

As one leading bauxite supplier put it: “It is a scary market right now – even we do not know what is going on.”

In Henan, there are conflicting news reports. One source reports that most BFA plants, including the larger players, have so far been unable to meet the MEP’s environmental regulations, and officially, production without licence is an offence.

On the other hand, another source considered this only applied to Sanmenxia City, Henan, and that most BFA plants in Henan meeting anti-pollution regulations have been in normal production since the end of March.

It is believed that the China BFA Association is trying to negotiate with the MEP to slightly lower the anti-pollution controls, although some observers feel there is little chance of this coming to fruition.

As ever in China, where there’s a will there’s a way: some unlicensed producers are reportedly producing at night and taking advantage of the somewhat less intense inspection rounds outside the winter season in Henan (ie. after March and before October).

Another new development from the MEP, which is expected to become mandatory, is its installation of online emission monitors at bauxite and BFA plant chimneys and dust collectors. The idea of the project is to constantly update emission data to the MEP’s system in real-time.

The impact of China’s robust anti-pollution controls in Shanxi and Henan is important since these two provinces host most of China’s bauxite reserves, 37% and 21%, respectively. Guizhou province is also an important source, hosting 15% of reserves, although its more remote proximity to Beijing may favour less attention from MEP inspectors.

Find out what’s really going on in China, network with the people in the know

With such clouds over China’s mineral production there emerge silver linings for both established and potential new producers of refractory minerals outside China.

At Ceramitec 2018, it was heard that at least one leading European magnesia producer was exporting to China (unthinkable two years ago!), while Hungarian white fused alumina and mullite producer REFRA System Ltd has responded to increasing customer enquiries by investing in an 8,000 tpa capacity expansion.

Yes, this is the first commercial sign of the non-metallurgical bauxite mined by First Bauxite Corp. from its developing Bonasika project in Guyana. The bauxite is shipped to north Spain from Guyana and calcined at ARCIRESA’s plant near Oviedo, Asturias. 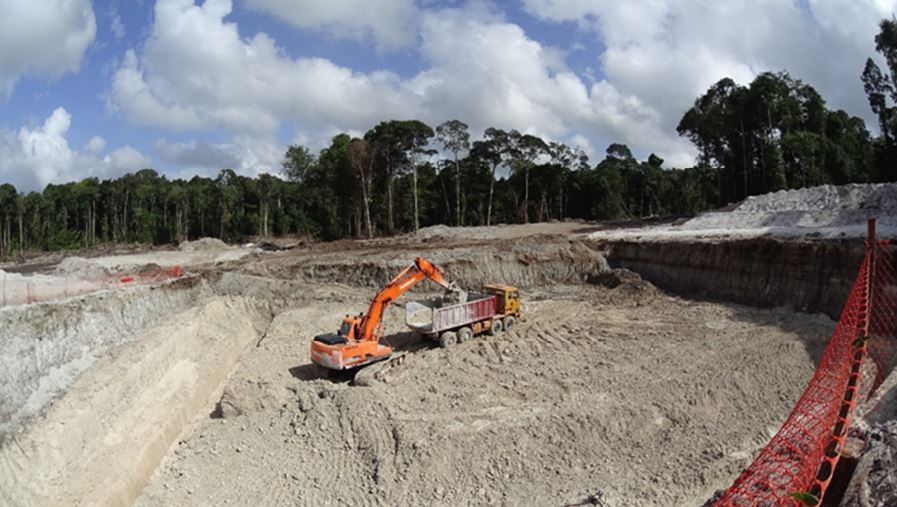 Contract mining of non-metallurgical bauxite commenced at the Bonasika deposit, Guyana in March 2018. First Bauxite has commissioned a second-hand trommel wash plant as an added step in the bauxite ore beneficiation process and is pursuing a Direct Shipping Ore strategy to utilise worldwide idled sintered refractory bauxite capacity for the refractory and other sintered bauxite markets. Courtesy First Bauxite

First Bauxite has received approval from the Guyana government to ship up to 40,000 tonnes of bauxite ore to Europe, Asia and North America for industrial scale product and market development in ceramic proppants and sintered refractory bauxite.

On 30 April 2018, First Bauxite announced that its subsidiary, Guyana Industrial Minerals Inc. (GINMIN), received a purchase order from a customer in China for 1,000 tonnes of bauxite ore. The company expects to ship the ore to the customer in May 2018.

In Turkey, Demireller Mining AŞ, headquartered in Mersin, has been producing bauxite for the cement and slag conditioning markets since 2002. More recently, the company has been mining its 5m tonne magnesite reserve in the Taurus Mountains of southern Turkey, and is now planning to develop into DBM production, a rotary kiln has already been purchased.